Arcata, Calif. – This Sunday, April 15, will mark one year since David Josiah Lawson, who was a sophomore at Humboldt State University, died after suffering multiple stab wounds at an off-campus party.

Currently, no one is in custody for his death.

“This tough journey has been filled with disappointments, from the lack of justification for the first responders’ actions, the delay in receiving the autopsy report, the police report that I have still not seen, the dwindling communication from the Arcata Police Department and the lack of availability from the HSU (Humboldt State University) president,” Charmaine Lawson, Josiah’s mother, writes in an open letter that was sent to local media recently.

“What I’ve learned through my son’s murder is that if policies and procedures were followed, I don’t believe I would be living this terrible nightmare.”

This Sunday, April 15, will mark one year since David Josiah Lawson, who was a sophomore at Humboldt State University, died after suffering multiple stab wounds at an off-campus party. Currently, no one is in custody for his death.

Shelley Mack is an attorney in Arcata and is currently working with Kyndra Miller, a lawyer based in San Francisco, to assist Ms. Lawson with litigation.

On April 13, Mack delivered a notice of claim to the City of Arcata in Lawson’s death.

Miller described how, although errors were made at the scene of the crime, what stood out to her as most problematic in the case were the representations and failure to investigate that happened afterward.

Mack says that the UPD (University Police Department) chief of police reached out to offer assistance in the case multiple times, which was refused by APD (Arcata PD).

Arcata City Manager “Karen Diemer will get up there and say, ‘We are working on this case every day,’ and that’s just not true,” she declared.

In addition, they have yet to see an autopsy or police report. The District Attorney’s Office has agreed to allow Mack to see the autopsy report if she comes down to their office, but they will not give her a copy.

“We have repeatedly asked for them and have been denied,” Mack said.

The law does not obligate the city to share these documents with the family, but they can be and they are, by departments committed to keeping families involved.

“They have been unwilling to keep Charmaine involved on developments or even share just basic details with her.”

The documents Mack presented to City Hall April 13 provide notice to the city of Ms. Lawson’s complaint for damages, and the city will have 45 days to respond to the notice.

If the city rejects the claim or fails to respond in the allocated time, then Mack and Miller can proceed to file the complaint in court.

“It outlines what happened and, more importantly, what hasn’t happened – the major failures to move the case forward in any meaningful way since the preliminary.”

Miller said they do not have to argue their full case in this claim.

“Our objective is to provide notice to the parties we are serving so those who are described in the notice, know what our claims are.”

She said that the failures of the Arcata Police Department are the primary focus.

Mack is also set to begin trial against APD in another case which starts April 23 – with the former chief of police as the key witness.

The claims in this case include judicial deception–in connection to the information that was included in the affidavit to receive the search warrant–as well as elder abuse, excessive force and a fourth amendment “knock-notice” violation.

“This is for two elderly 215 patients who had their house raided by APD who thought they were growing cannabis. APD found no cannabis, no grow operation and seized nothing.”

“He was terminally ill and his oxygen mask was ripped off and he was made to get on the ground.”

This notice of claim comes at the end of a heavy week for the City of Arcata, which saw the abrupt resignation of Police Chief Tom Chapman on April 10.

Chapman’s resignation not only fulfills one of the demands made by persistent student-led protest at HSU to bring national attention to Lawson’s unsolved murder but comes the day after retired FBI investigator Tom Parker terminated his contract with the city.

Parker was brought in via the Lawson family to do a review of the case and help APD with potential leads.

Mack said she was not sure whether Parker initially meant to say as much as he did to media after terminating his contract with the city. However, he was uncomfortable with the answers Arcata’s city manager gave when questioned about Parker and Chapman’s resignations.

“That really got under his skin. The representations that she was making were not accurate.”

“I was very concerned about the progress of the case. I was concerned that I was being given what I would refer to as stalling representations or being told things were supposedly being done, only to find out they were not being done by the police department.”

Parker is scheduled to give another interview with KHSU and KQED, which will be aired next week.

When asked if their sudden departures would delay the case any more than it already appears to have been, Mack responded that she is hopeful this will help the case move forward again and that things appear to be at a standstill.

Chapman’s resignation not only fulfills one of the demands made by persistent student-led protest at HSU to bring national attention to Lawson’s unsolved murder but comes the day after retired FBI investigator Tom Parker terminated his contract with the city.

She also hopes the city will look to bring in a new chief of police from outside of the area.

“I am hopeful that if they hire a new chief who is not part of this good-ol’-boy Humboldt County insider system, they may be able to change the culture of the department in a way that helps move the investigation forward. But I am concerned that more personnel changes to the case are going to have to occur.” 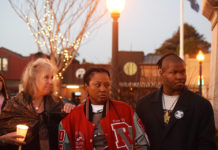 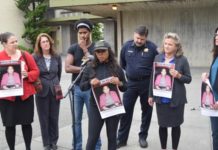 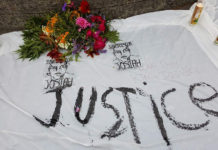 Where are the police in the murder investigation of Humboldt State student David Josiah Lawson? 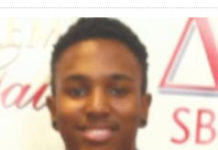