Absolute power corrupts absolutely, or however the saying goes, which is how the District Attorney’s Office in Dallas County, Dallas, Texas has been operating from the early 1990s up to today. 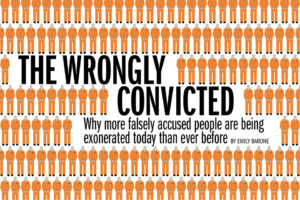 It’s highly possible that these same corrupt tactics have been used way before what I’m about to describe, but I choose to focus on the documented events I was able to witness and research. This includes an outright wrongful conviction campaign by D.A. Jason January, who tried to coax false statements from witnesses in a successful effort to frame a Black man for murder, then suppressed every witness that told the truth.

Unlike traditional journalism on the wrongfully accused that is extremely wordy and filled with statistical rhetoric, this piece is designed to bring action and awareness to a corrupt judicial system in Texas and set someone free.

Timmy A. Dawson, 681033, who is a native of Dallas and as of now resides at the Michael Unit maximum security prison in Tennessee Colony, Texas, is a victim of wrongful conviction. In his case, it was deliberate.

After spending over 24 years in prison, filing all sorts of appeals and writs to prove his innocence and having gained no ground towards his release, Dawson is forced to wake up to the day-to-day fact that he may have to spend the rest of his life in prison for a murder he, witnesses and facts say he didn’t commit.

Throughout his incarceration, he’s had to deal with the burden of stress; high blood pressure; knee surgery; the death of his father, brother, two aunts, half sister and stepmother – all on the back of being born with a bad heart.

He’s also had to deal with seeking a probate lawyer to help him reclaim the land, oil and mineral rights his dad left him. This is in relation to his half sister and another associate forging Dawson’s name on documents in order to falsely obtain possession since neither were heirs. These are documented events!

Timmy A. Dawson, 681033, who is a native of Dallas and as of now resides at the Michael Unit maximum security prison in Tennessee Colony, Texas, is a victim of wrongful conviction. In his case, it was deliberate.

Dawson rightfully feels that if the D.A.’s office wouldn’t have hidden witnesses and evidence, “I’d have been exonerated.”

On the night of Dec. 4, 1993, in Dallas, several credible witnesses – namely Monica Kyles, Latrecia White and Gregory Paul – all state that they saw two dark skinned Black men, one tall and one short (Dawson is light skinned), fire several shots at another Black man, Curtis Lean Brown, before fleeing the scene on foot.

All three witnesses reported seeing the shooting from two different locations, with Kyles standing in her bedroom window, and White being near the John D’s night club with Paul, who says he was around 30 feet away from the shooting.

All three contest that they spoke with D.A. January during the trial, denying that Dawson was one of the shooters. “The D.A. never called me up on the witness stand because I told him I didn’t see a light complexion guy,” White wrote in her affidavit. “The man that was on trial was a very light complexion man and the two men shooting were very dark complexion. I was never called to the witness stand to testify,” Kyles stated in hers.

Dawson rightfully feels that if the D.A.’s office wouldn’t have hidden witnesses and evidence, “I’d have been exonerated.”

In an attempt to invent a motive for Dawson and give the state a theory, January claimed that the shooting was behind a dispute over a jacket (that didn’t contain Dawson’s DNA) at the John D’s night club that escalated after closing hours.

The only person and witness to testify, Cassandra Wilson, went along with the D.A.’s program and adopted the jacket theory. This is why she was called to testify and the other three witnesses were hidden from the defense.

Contrary to the wheels of justice, January’s only goal was to find someone willing to finger Dawson as one of the shooters, with little regard to the overwhelming amount of contradicting evidence that he himself tried to manipulate – pure opportunism.

During an appeal hearing for a retrial that was denied, evidence supporting Dawson’s innocence mounted. As the cliché goes: the floodgates to hell opened.

On Feb 11, 2000, Leroy Griffin, an investigator for the Public Defender’s Office, provided an affidavit bearing witness to the following: “During Dawson’s trial, I overheard a Black female, who was a state witness, say to another state witness that she was going to get up on the witness stand and lie about what she knew of the murder. I don’t recall the female’s name, but I learned later from the attorney representing Mr. Dawson that only one Black female testified. The Black female who testified is the person who I overheard say that she was going to lie.”

Another woman, Michelle Woods, told Tim’s counsel Gracie Lewis that she heard Paul say, “It’s a shame that that man is going to the pen for something he didn’t do.” This prompted Lewis to investigate the claim, which generated a snowball effect and spearheaded the suppressed witnesses into existence, who then provided sworn affidavits with no obligation other than to tell the truth.

Despite this exposure of mishandled witnesses, Dawson has received very small and limited amounts of legal assistance. Chris Scott, who was exonerated in 2009 for a murder he says he didn’t commit, briefly reached out to Dawson under the notion that he would help him get exonerated too.

This effort resulted in Dawson’s case getting a very general and undetailed mention in the mainstream publication Men’s Journal (March 2016 issue) that only noted his conviction being a result of bad lawyering, no evidence, etc. This did nothing to help further his progress or need for legal help.

This is mainly due to the fact that his current prison location, address, correctly spelled first name, and prison ID number weren’t listed, nor was there any proof that withheld witnesses got deliberately suppressed from testifying about what really happened – and that these witnesses eventually wrote affidavits expressing the same. 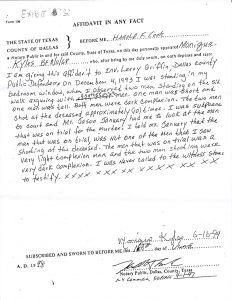 Dawson explained that as soon as the article was in print and the sensational rewards for the writer reaped, Scott (who only visited Dawson a few times) simply vanished when it became obvious that it would take more resources than a glory seeking article to net his release and possibly more. Not to mention that Scott never told him that the basis for their brief exchange was to compile anecdotal support for a mainstream article.

This may have played a part in Dawson’s lack of subsequent exposure and legal help, since by reading the article it seemed like Dawson had a network of support via Scott and the legal team he mentioned.

The same kind of help that Scott mentioned having trouble receiving is the very same help Dawson needs. But Dawson’s case isn’t unique at all. Other prisoners throughout Texas, and many at the Michael Unit, are serving time under wrongful and questionable convictions.

This case in particular stands out because the conviction was singlehandedly a result of January’s effort in using his cunning skill to craft and manipulate the trial’s outcome – an effort I’m all too familiar with.

I was the victim of something similar in December 2000. But the D.A. on this burglary case, Brian Corrigan, was unsuccessful in manufacturing a conviction. This was with help from law enforcement.

During a pretrial hearing, the victim and only witness to the crime, Tonya Scroggins, testified that I wasn’t the person to commit the crime. She then pointed at the state’s witness and known informant, Ron Reed, who she accused of the burglary to the oohs and ahs of courtroom spectators.

Even though she refused to change her story, this didn’t persuade the judge to dismiss the charge but only to launch a conviction campaign with the help of the D.A. and my court-appointed attorney, John Hendrix.

This resulted in me being strategically placed around informants in hope that I would admit guilt to the many prisoners who claimed that admission is the first step to release. This carried on for over a year until a not guilty verdict was reached on Dec. 12, 2001 (see cause no. F00-24176-PM).

During a pretrial hearing, the victim and only witness to the crime, Tonya Scroggins, testified that I wasn’t the person to commit the crime.

This only validates how systemically manufactured evidence is used in the Dallas County D.A.’s office and probably within the judge’s chamber and beyond. One of the jailers who didn’t like me was mysteriously part of the jury pool and nearly made the cut.

In early 2002 the Dallas Morning News published a short article about dirty cop Officer De La Paz, who was exposed for his role in arresting random people for cocaine, but the drugs turned out to be sheetrock he himself planted in the evidence room.

The initial field test deemed the drugs positive but follow up tests to pounds of seized cocaine De La Paz had a hand in turned out to be sheet rock. This called for dozens of drug related cases to be brought back to court and many cases dismissed.

The Dallas County D.A. and Sheriffs’ offices have a history of employing such bad apples where, after exposure, the story fed to the public is that it was the work of that individual who was fired – or resigned – and the problem is solved.

In reality, knowledge of and participation in these scandals streaks throughout the department’s entire ranks. Judges routinely sign faulty search warrants, and forensic experts often mishandle DNA tests and other sensitive evidence.

This is why men and women like Dawson and their cases are kept out of the public eye and witnesses who know the truth are suppressed by the very same officials who have the official duty to seek justice for the victim of injustice.

In reality, knowledge of and participation in these scandals streaks throughout the department’s entire ranks. Judges routinely sign faulty search warrants, and forensic experts often mishandle DNA tests and other sensitive evidence.

If witnesses, evidence and facts say Dawson is an innocent man, why is he still in prison after 24 years without the slightest hint on who to turn to for help?

As of today, the only help he has is any that comes as a result of the exposure of what the state of Texas has hidden for nearly three decades – which is the truth!

Dare to Struggle, Dare to Win. All Power to the People