News & Views Local News & Views We know a benefactor will save the Bay View the way Dr....
Facebook
Twitter
Email

I’m writing this editorial because I want to brag on my husband, Bay View publisher Dr. Willie Ratcliff, and tell you why he and I have faith that a benefactor, someone with deep pockets who cares, will step forward in time to save the Bay View and keep it in print – an angel who understands how much the Bay View means to a prisoner being tortured and a youngster in the hood being framed. 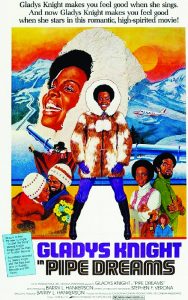 Dr. Ratcliff was that angel, that benefactor, to Gladys Knight in 1975, when she ran out of money in the midst of producing a major film in Valdez, Alaska, about a Black contractor being squeezed by the big boys out of lucrative work building the $10 billion Trans-Alaska Pipeline. Gladys called the film “Pipe Dreams” and what a production – filmed on location in Valdez, a busy little town hugging the small strip of land between the deep waters of Prince William Sound, notorious for the Exxon Valdez oil spill years later, and the towering Chugach Mountain Range, rising straight up behind the town – a town where 5 feet of snow falls overnight.

With stunning cinematography – even a love scene inside a length of 4-foot-diameter pipe – and Gladys Knight at the height of her popularity, Gladys and her crew were certain the film would be a hit. But this was an all-Black film, like “Black Panther” today; when she ran out of money, no mainstream white-owned lender would help. Gladys Knight needed a Black angel.

She was in Valdez, and so was Dr. Ratcliff, who was using pipeline construction as a great leap forward toward economic equity for Black businesses – the very theme of Gladys’s movie. Gladys did her research and learned how Dr. Ratcliff had fought to make the Alaska pipeline the first large affirmative action project in the U.S.

With the help of Rep. Yvonne Burke, the first Black woman elected to Congress from the West, and Rep. Parren Mitchell, founder of the then brand new Congressional Black Caucus, a rider was attached to the oil companies’ lease of federal land to be crossed by the pipeline. The rider required that businesses owned by people of color – in Alaska in those days meaning Blacks and Alaska Natives – do 10 percent of the work.

It wasn’t an empty promise. Dr. Ratcliff, then called the second most powerful man in Alaska next to the governor, made sure that requirement was enforced, and thousands of workers, largely people of color and women, made the Trans-Alaska Pipeline the biggest, most successful affirmative action project in U.S. history. He had 550 workers, nearly all Blacks, Natives and women, working on his own contracts.

So Gladys Knight called Willie Ratcliff to plead with him to save her film. She visited him at his home, where she convinced him to give her the equivalent of $120,000 in todays’ dollars – to the horror of the banks financing his contracts.

She promised to repay him right off the top, with the film’s first receipts, but white supremacy got in the way. While blaxploitation films were the rage and making Hollywood rich, Gladys Knight’s film, “Pipe Dreams,” was Black-owned and produced, exalted the best of Black character and culture and dreams of a Black-controlled economic engine to dominate business the way Blacks were dominating sports and entertainment.

Hollywood saw Gladys Knight as a competitive threat and refused to distribute her film. With Willie’s money, Gladys finished the film and released it in 1976 to rave reviews. But it was shown for one night only in a very few cities, then shelved and, by most people, forgotten.

Now Dr. Ratcliff needs an angel, a benefactor, to save his newspaper – your newspaper – the San Francisco Bay View. And he’s calling on you, just as Gladys Knight called on him, to help find that person.

Do you know someone who knows someone with deep pockets and a heart of gold? Tell them that their donations to save the Bay View can be tax deductible. We can route them through our 501(c)(3) nonprofit arm. Do they owe taxes this year? Instead of funding Trump, those same dollars can save the Bay View, and the donor wouldn’t be spending an extra dime.

Now Dr. Ratcliff needs an angel, a benefactor, to save his newspaper – your newspaper – the San Francisco Bay View. And he’s calling on you, just as Gladys Knight called on him, to help find that person.

We can’t give up hope. Dr. Willie Ratcliff has no regrets for having saved Gladys Knight’s film. He’s devoted his 85-year-long life to supporting Black people and building a stronger, brighter Black future. Can we find an angel to save the Bay View newspaper the way he saved “Pipe Dreams”? Yes, we know we can!

No deep pockets? You can still help

Meanwhile, here at the Bay View, the bill collectors are calling and funds are badly needed just to keep the lights on. If you can’t donate big money, maybe you can send a little something. Prisoners are filling our mailbox with small checks and books of stamps. Strangers have given us $6,500 since Christmas through our GoFundMe campaign. Readers are using the Donate button on our website, at http://sfbayview.com/support/, and mailing checks and money orders. Subscriptions are pouring in.

Our biggest benefit so far is coming up Saturday, April 21, at 3 p.m., when playwright Charlie Hinton stages his deeply moving play, “Solitary Man: A Visit to Pelican Bay State Prison,” with co-star Fred Johnson playing a lifer stuck in torturous solitary confinement indefinitely and also playing the sweetest trumpet you ever heard.

The play will be followed by a star-studded panel composed of Jose Villarreal, survivor of a decade in the Pelican Bay SHU whose artwork helped hunger strikers survive, now popular in the Bay as an artist and activist; Marie Levin, prominent speaker, organizer of prisoners’ families with California Families Against Solitary Confinement and sister of Brutha Sitawa; and Anne Weills, co-counsel with Jules Lobel and the Center for Constitutional Rights on the lawsuit to end indefinite solitary confinement and now fighting brilliantly to save that victory from defeat. You’ll find all the “Solitary Man” details on Facebook and Brown Paper Tickets.

Dr. Ratcliff and I thank you with all our hearts for anything you can do to help save the Bay View. In this 50th year since Dr. King was assassinated, on April 4, 1968, and the country erupted in flames that sparked fundamental change, mostly positive, for Black people, change and hope is in the air once again … and in response intense repression is rising that the Bay View can help us resist.

We refuse to be afraid. Your love keeps our faith alive.