What kind of work environment, called toxic, racist and sexist by former employees, breaks a man down until he can no longer function at his job or even contemplate quitting his job and seeking another one and makes a brilliant young Black man with a family and a bright future ahead of him feel he has no alternative but to commit suicide? Zecole Thomas blames Uber’s stressful work environment for destroying her husband’s career and life. Engineering computer wiz Joseph Thomas killed himself in April of last year, 2017.

It sounds like brother Thomas was subjected to some old time slave master tactics, like drapetomania. Back in the day, slave masters tried to convince enslaved Africans that their desire to be free meant they were suffering from a disease called drapetomania! If you didn’t want to be a slave and work for free in a hostile environment and didn’t like daily drudgery you had an illness. Then consider me a drapetomaniac!

As Thomas was falling apart, he bemoaned his fate and the lack of brothers and sisters in the workplace – opinions vary that from 1 to 9 percent of the workforce was Black – people he could talk to and share his feelings with, especially in executive or leadership positions, which were 2 percent Black. And when Zecole tried to get compensation for her family from Uber after his tragic suicide, she was denied. So she filed a lawsuit.

Also, on April 12, two Black men, Donte Robinson and Rashon Nelson, were arrested for trespassing at a Philadelphia Starbucks while sitting at a table waiting for a business partner. They were arrested for Not Ordering Coffee Fast Enough While Black!

Starbucks responded by making plans to close 8,000 stores on May 29 for racial bias training. The incident prompted consumers and activists to #BoycottStarbucks and consider alternatives like Oakland-based Red Bay Coffee. Owned by Black entrepreneur Keba Konte, Red Bay Coffee’s staff is composed entirely of women, people of color and the formerly incarcerated.

I say we should build a wall on the Canadian border! Ha! Up north instead of down south! Too many Canadians are being allowed into this country! Canadian comedians like Jim Carrey, Mike Myers, Martin Short, John Candy and Dan Akroyd are taking jobs away from local comedians! However, brother Keba has some more practical ideas.

Brother Keba, who I have known for well over a decade, says racial bias training programs aren’t enough to stop these racially charged incidents. It’s extremely important for the leadership in these big businesses, companies and corporations to be as diverse as the communities they serve.

Recognized as “Small Business of the Year“ at last year’s California Small Business Day Awards, Red Bay Coffee has used a unique business model that invests in its employees and in the Oakland community at large by paying above minimum wage and using profit sharing to award employees a percentage of the company’s profits.

Red Bay Coffee recently received praise from actor Wendell Pierce, which prompted a tweet storm requesting that Red Bay Coffee expand across the country. Red Bay Coffee currently has plans to expand into San Francisco, Philadelphia, Richmond and Baltimore by next year, hoping that their business model will set an example for other corporate competitors.

Since the Starbucks incident happened, Red Bay has also received even greater support from the Oakland community. Their retail sales have increased 50-60 percent and their online sales have grown by 110 percent. Red Bay Coffee has two addresses: 2327 Broadway, Oakland, CA 94612 and 3098 E. 10th St., Oakland, CA 94601.

Here are some other key points of view from Keba and his crew:

Starbucks’ implicit bias training is a good start, but it’s ultimately not enough. It will take generations and deep structural changes to reverse the legacy of racial bias that has been built into our society. It has taken decades for Starbucks to understand the need to create an inclusive environment for its employees and customers, and the company is only now coming to terms with the impact of racial bias in its shops.

Meanwhile, Red Bay Coffee was built four years ago with a progressive business model at its very core – one where people of color and women are not only safe and respected but can lead and flourish. Buying coffee from a Black-owned and -led shop like Red Bay Coffee isn’t just symbolic. It’s about changing the substance of a business culture that has for too long created barriers to the advancement of Black people, all people of color, and women.

Our business model is also built to afford real economic opportunities to employees by ensuring that they make livable wages and are all given a share of the profits Red Bay Coffee generates. Many of our business decisions are made in collaboration with employees, giving them a stake in the success of Red Bay Coffee.

And by investing in our people, we’re investing in the local economy and community as well. This values-driven business model is the bedrock of our brand.

Now more than ever, consumers seek out businesses that align with their beliefs, and we know there are millions of them out there who would want to support the values of equity, fairness and inclusiveness we stand for. To do that, we’re trying to establish a national and international presence for our brand, and are opening shops in Philadelphia, San Francisco, Richmond and Baltimore this year. And while our supply chain is already international, we’d ultimately like to invest in communities outside of the U.S. as well. Learn more at www.redbaycafe.com. 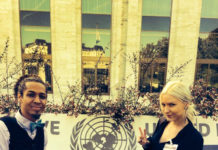 Exposing a national crisis in Black mental health behind bars