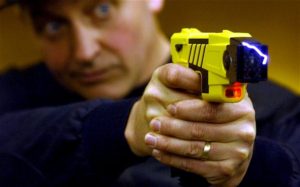 This June, San Francisco voters will make an important decision on whether to hand over a dangerous power to the San Francisco Police Officers Association (POA).

Proposition H, a measure funded by the POA, is an attempt to loosen important use of force restrictions on Tasers that were pushed on the troubled SFPD by a team of experts from the Obama Justice Department.

To do this, the union is spending lots of money and using misinformation and deceptive advertising to trick people. They are willing to say anything to win. And the biggest lie is that Prop H is about whether or not police should have tasers at all.

Last November, the Police Commission approved tasers for SFPD and adopted a sensible approach for deploying them. The commission worked collaboratively with the SFPD, experts and community members to come up with a policy on how Tasers should be used in San Francisco.

That carefully-crafted policy was finalized and adopted by the Police Commission in March. Even though that policy is backed by Mayor Mark Farrell and Police Chief Bill Scott, it’s opposed by the police union because it wants its members to be able to use tasers in non-violent situations, where the current policy requires them to try de-escalation tactics first.

If Prop H passes, San Francisco police officers will be allowed to use a taser on someone who is unarmed and poses no immediate physical threat, or on someone who says no to a police order due to confusion or mental illness. These loosened restrictions won’t save lives; they will allow police to be even more aggressive.

This police union behind Prop H is the same police union that for many years fought efforts to integrate the SFPD.

This is the same police union that said the officers who killed Mario Woods “acted with restraint … lawfully and within policy.”

This is the police union that said that SFPD “officers acted appropriately” when they killed Luis Gongora Pat, a homeless man who had mental health issues.

This is the police union that chose to pay for the legal defense of the officers who sent racist, homophobic and misogynistic text messages – (even though doing so was clearly beyond the scope of the representation they normally provide officers accused of wrongdoing) – resulting in them keeping their jobs on their force.

This is the same police union that said Colin Kaepernick should apologize for his protest against police brutality saying he was promoting “a false narrative and misinformation that lacks any factual basis.”

If Prop H passes, San Francisco police officers will be allowed to use a taser on someone who is unarmed and poses no immediate physical threat, or on someone who says no to a police order due to confusion or mental illness. These loosened restrictions won’t save lives; they will allow police to be even more aggressive.

Prop H would take the power away from the Police Commission and put it in the hands of this police union.

The POA may persistently deny it, but we know there is a problem with brutality and racism within the San Francisco Police Department. Prop H will only make those problems worse.

As studies from places like Chicago and Houston repeatedly show, the introduction of tasers exacerbates the problem of police using force disproportionately on people of color. And the looser the taser policy, the greater the officer’s discretion to use the weapon and the more likely biases – both implicit and explicit – will drive who police will shoot with tasers and who they will not.

In a recent televised debate, POA board member and SFPD Bayview Station Sgt. Tracy McCray admitted the goal behind Prop H is to give officers greater discretion to use tasers more often than the policy adopted by the Police Commission would allow. As she put it, “The more restrictive the language, the less the officer will use the device.” If they were being completely honest with voters, their Prop H campaign slogan would be “more force, less de-escalation!”

When asked by the Department of Elections, per the normal process, to provide an analysis of the impact of Prop H on his department, SFPD Chief Bill Scott told the truth. He called it the “anti-thesis” of the collaborative reform process recommended by Obama’s Justice Department and emphasized that it would be dangerous to take the power to make adjustments in SFPD taser policy away from the chief and commission.

The POA hit back immediately, publicly calling Chief Scott an “abject failure” who “clearly has no mind of his own” while claiming he’d been “played like a cheap fiddle” – as though he owed a greater obligation to be loyal to the politically extreme views of the POA than to be truthful and accurate in his statements to the public.

But the POA leadership does not speak for the entire rank and file of the SFPD. Officers for Justice is opposing Prop H and is telling voters it “wholly supports the chief’s, the Police Commission’s and our community stakeholders’ positions” in support of the policy the POA wants to overturn with Prop H.

We have to stop this dangerous ballot measure. If it passes, it can only be changed through another expensive election or a four-fifths majority vote by the Board of Supervisors. It’s reckless and unprecedented to strip the police chief and the Police Commission of their power to regulate how a dangerous weapon is used by police officers.

We have to stop this dangerous ballot measure. It’s reckless and unprecedented to strip the police chief and the Police Commission of their power to regulate how a dangerous weapon is used by police officers.

But this well-funded special interest group has publicly threatened to spend at least a half million dollars to trick voters into approving Prop H in the June election. Police unions don’t get to decide their own use of force policies. Don’t be fooled. Vote No on Prop H!

John Crew is a retired police practices expert for the ACLU and a leader in the No on Prop H campaign. Learn more at https://votenoproph.nationbuilder.com/.