I am deeply disappointed and I regret the U.S. District Court ruling that could allow transport of coal to the planned new bulk terminal at the Port of Oakland. Shipments of coal endanger the health of Oakland’s residents as well as that of port workers. I urge the City to continue seeking to protect people’s health by preventing the coal shipments. 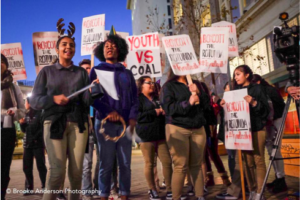 Judge Chhabria indicated that the City could still adopt a regulation for OBOT, but stated that it must be done properly.

As a children’s mental health specialist in Contra Costa County, I’ve found that more than 90 percent of the children I work with are asthmatic. As a Richmond City Council member, I have fought hard to reduce Chevron Oil’s pollution, and as candidate for the State Assembly District 15, which includes part of Oakland, I seek to protect the most vulnerable among us.

I regret the U.S. District Court ruling that could allow transport of coal to the planned new bulk terminal at the Port of Oakland, endangering the health of Oakland’s residents. I urge the City to continue seeking to protect its people’s health by preventing the coal shipments.

Oakland youth, drumming in dust masks, will hold a spirited protest of developer Phil Tagami’s proposed Oakland coal terminal – in the face masks they will be forced to wear if the toxic dust and climate chaos promised by the terminal arrive in Oakland. Both middle and high school students will join in the environmental justice protest organized by Youth vs. Apocalypse.

This Thursday, East Bay Innovation Academy (EBIA) planned to hold an awards ceremony in downtown Oakland, hosted by Tagami, and honoring controversial Alameda County District Attorney Nancy O’Malley. The ceremony was to be held at the Rotunda Building, owned by Tagami.

After learning of a planned youth-led protest outside, EBIA abruptly canceled the event. But in light of the recent court decision that could allow Tagami’s plan for a toxic coal terminal to move forward, youth are continuing plans to protest and spread the word outside the Rotunda Building.

The youth and their supporters will hold a high-energy action from 6:00 to 7:00 p.m. this evening, May 17, sharing their message through drumming, poetry, live music and sidewalk art. Students will be distributing information to downtown commuters, urging them to join them in the struggle for a healthy, just and coal-free Oakland. Youth and musicians will lead a march from the Rotunda Building, 300 Frank Ogawa Plaza, to City Hall, calling on the City to stand strong in the legal fight against the coal terminal.