May our Divine Mother-Father Creator of and in All find you and (y)our extended Family thriving and in healing Spirit. Asé.

In our grand traditions of African Liberation Day/Month – and May First/International Workers’ Day – WE remember and honor our Beloved Ancients and Ancestors from yesteryears and yesterday. Recently, super-(s)heroes such as freedom fighters Mama WINNIE MADIKIZELA-MANDELA and KIILU NYASHA made their Spiritual Transformations.

i had the fortune of meeting Mama Winnie on two occasions and personally experienced not only her revolutionary energy and wisdom; but also heard some of her decades-long pain from some of the most horrific and torturous acts inflicted by the fascistic European (“white”) corporate-apartheid terrorists controlling Azania (South Africa).

Warrior Kiilu is also a great inspiration and uncompromising advocate for Power to the People, freeing our political prisoners and abolishing prisons. As a young woman, she served bravely as a leader in the Black Panther Party for Self-Defense. Kiilu later evolved into an outstanding straight-no-chaser journalist (including with this Bay View newspaper).

Though WE at times debated fiercely and disagreed over strategies and tactics for our community survival efforts and directions of our movements, she/WE always concluded in a respectful and loving manner. i invite our readers to check out one milder exchange with Kiilu as she graciously hosted me on her wonderful “Freedom is a Constant Struggle” show at https://www.youtube.com/watch?v=cJ-0dCETfqI. Asé.

At this time, i am also remembering another life-long friend, class-mate and fellow steelworker; Baba CLYDELL REDMOND; as well as our wonderful, bass-sangin neighbor, Baba Deacon VICTOR DAVIS. Asé.

In addition, WE also take these moments to reflect on the great examples of revolutionaries EL HAJJ MALIK EL SHABAZZ (aka Minister MALCOLM X), Mother YURI KOCHIYAMA and Vietnamese liberation fighter HO CHI MINH, whose sacred birthdays WE recognize on the 19th of May. Asé. (Don’t forget the upcoming 19th Annual MALCOLM X Jazz Festival – sponsored by the Eastside Arts Alliance and Cultural Center – on Saturday, 19 May, from 11 a.m. to 7 p.m., at San Antonio Park (Foothill and 18th Avenue, in Oakland). It is entirely FREE … so bring your family and neighbors.

Our commUNITY is also mourning the government-sanctioned and unjust executions of several more of our young G-o-ds, including SAHLEEM TINDLE in Oakland, STEPHON “ZOE” CLARK in Sacramento (and numerous other innocent Africans around the united capitalist prison terrorist states of amerikka). WE have proudly marched with the grief-stricken but determined Tindle and Clark families.

Please join with these victims and survivors in calling for murder charges to be filed immediately, arrests to be made expeditiously, with forthcoming convictions and jailing of these killer cops (whose expensive salaries and generous benefits WE pay for). In addition, the grieving Stevante Clark, brother of Zoe, has been arrested for his protests. WE call for an immediate dismissal of the charges he is facing. Asé.

WE fully condemn the corporate-led and corrupt republikkklan and demokkkratic parties, U.S. Congress, (P)Resident Trump, military leaders and commercial media for their continuous lies and devastating wars against the people of the world and our environment. Most recently, these abusers of power and key developers of the worst forms of weapons of mass extinction, including chemical, biological, psychological, nuclear and more – with support from their murderous allies in Europe, Saudi Arabia and the terrorist-apartheid European settler-state of isreal – have increased their vicious threats and deadly attacks on the nations of Palestine, Yemen, Syria, Korea, Venezuela, on our Afrikan continent and other parts of our earth.

On the other hand, WE applaud those who continue to organize for justice, which can lead to some true peace. On 15 April, WE held a major March for Our Lives! demonstration and rally in Oakland, with other mobilizations occurring around the U.S. and globally. Our Bay View newspaper and AFRICANS DESERVE REPARATIONS! campaign were proud to be some of the more than 150 local endorsers and financial contributors to this successful mass statement. Asé.

As WE reported in last month’s column, Baba Herman Bell, one of our longest-incarcerated political leaders, has been released! Baba Herman, now 70, had been locked down and tortured for nearly four and a half decades in New York and California concentrations camps.

WE applaud Baba Herman’s family, the Jericho Amnesty and other supportive movements, and even New York Judge Richard M. Koweek for correctly upholding the parole board’s decision, despite the objections of the police officers’ association, New York Mayor Bill de Blasio, Gov. Andrew Cuoma and other repressors and “liberals.”

With this development, WE will continue to advocate for the release of all our political leaders under lock-down … for way too long. This includes Baba Herman’s co-defendant, Baba Jalil Muntaquin, who goes before the same New York state parole board in June. You can stay informed on the status of all our imprisoned political leaders, and how to support them, through http://www.thejerichomovement.com/.

Williams’ attorney has stated that the judge abused her authority by, among several unethicalities (i just made up that word), demanding he sign with one of her colleagues and requesting he “give a shout-out” to her when recording a song. When Williams refused, this Judge allegedly sentenced him to two to four years for flipping wheelies on his motorcycle while filming a music video. WE know the righteous folk in Philly will do all in their power to remove this criminal judge from the bench ASAP. Asé.

These are the smiles of reparations recipients! They reside in the African Diasporan nation of Brazil. They received title to land the size of New York City and Los Angeles combined, or about 3.5 Chicagos. Their victory was a result of the work of our movements stemming from the United Nation’s “Third World Conference Against Racism … (2001)” and in support of the outcome document of that conference, the Durban Declaration and Program of Action (DDPA).

In 2009, after the U.N.’s follow-up “Durban Review Conference,” in Geneva, Switzerland – and after listening to the report from Brazil – I asserted, argued and wrote that the DDPA was the third greatest document penned in the last 500 years to have a great and direct effect on African people. The first two, “The Sublimis Deus,” issued in 1537 by the Pope relegated global slavery to African people and said we “had no souls, and thus were not human.” It has never been rescinded.

The second was the 1885 “Berlin Act.” This mandate inaugurated a renewed “scramble for Africa” i.e., wars for colonizing all of Africa. I asserted that the DDPA had the power, if understood, to EMPOWER AND INSPIRE people of African descent to reverse all the harmful effects of those former two “wicked” and devastating documents.

The 2003 decree issued by President Lula da Silva and the Workers Party (PT) government in Brazil, was part of their commitment to the DDPA, that came out of the “WCAR III.” Under President Lula, Brazil was the MOST aggressive government engaged in reparatory justice. (Ayiti/Haiti and President Jean Bertrand Aristide and the Fammi Lavalas Party and government were possibly a strong second – ed.)

In 2002, President Lula created a cabinet level position titled the “Secretariat of Race.” They made all higher education free for African descendants and made it illegal to discriminate against anyone practicing an African religion (only country in the world with that law).

Many economic and justice development programs were initiated and implemented. From 2002 to 2008, the time of the “Durban Review Conference,” they reported to have lifted 23 million people from poverty with their programs. Although a tremendously large number (12-14 million African descendants live in poverty in the U.S.), Brasil had close to 100 million people living in poverty at the time. Had that government stayed in power, they were headed to make many more major changes.

This is truly a victory for us all! This builds tremendously on the judicial and legal framework for reparations globally. When we state unequivocally, and begin our struggle here in the U.S. from the position that enslavement in the U.S. was a criminal act, we are asserting the DDPA!

Give thanks to the Durban 400, Africans and African Descendants Caucus and many others who successfully lobbied the governments at the “WCAR III” – who were under intense pressure from the European Union, U.S. and Canadian imperialists and former colonizers – to ensure the success of the powerful language included in the DDPA! They should be recognized as major sheroes and heroes!

The Durban 400 were approximately 400 people of African descent, primarily from the U.S., led by the December 12th Movement (Viola Plummer, Roger Wareham, Omowale Clay and others), the National Black United Front (Dr. Conrad Worrill, Samori Grace and others) and several members of our National Coalition of Blacks for Reparations in America (N’COBRA).

The African and African Descendants Caucus brought together advocates for Reparations from around the world who collectively struggled together before, during and now after the Durban Conference in 2001. This included N’COBRA’s then National Co-Chairs (now Ancestor) Queen Mother YAA ASANTEWA, fka Dorothy Benton Lewis of Washington, DC, and Baba Jahahara Amen-RA Alkebulan-Ma’at, then working in New York City; N’COBRA’s then Lead Attorney, Adjoa A. Aiyetoro; N’COBRA International Commissioners Onaje Mu’id (New York and New Jersey) and Mashariki Jywanza (Indianapolis, Indiana); new Ancestor, Baba HANNIBAL AFRIK (of Chicago and Mississippi); and dozens of N’COBRA chapter leaders from around the U.S.

NOTE: Our National Coalition of Blacks for Reparations in America (N’COBRA) will hold its 29th Annual Convention, from 22-24 June 2018. This year’s Convention is in partnership with Morgan State University, in Baltimore, Maryland. Details are available at info@ncobraonline.org.

Later this spring, the Mandela Food Coop will re-locate from its current 1430 Seventh St. location, near Nelson Mandela Parkway, to the larger corner space a half block away on Seventh Street at Center. This is directly across from the West Oakland BART station, formerly given to the now-shuttered “99 Cents” store.

For years, Mandela Coop has been bringing our community fresh, organic and locally-grown produce and healthy prepared foods. Also, our families and seniors who are on Cal Fresh (“food stamps”) can get a 50 percent discount by using EBT. To further support this important expansion, please make your contributions, large or small, at https://www.gofundme.com/MandelaGrocery/donate.

Finally, a major RIGHT ON RIGHT NOW! to Brother Bryan Stevenson and the Equal Justice Initiative for their years of critical work to support the incarcerated, abolish prisons and expose the criminality of the U.S. and state governments, past and present. They have also just opened The Legacy Museum: From Enslavement to Mass Incarceration, in Montgomery Alabama.

It is built on a site where thousands of captured and enslaved Afrikan women, men and children were warehoused and then auctioned off to prison plantations, in Alabama and beyond. The museum also chronicles the crimes against our humanity and some of the thousands of state-sanctioned lynchings, dismemberings and burnings by the European American (“white”) terrorists in and out of government. The website is https://eji.org/legacy-museum.

Jahahara is a Baba (Father), a “FREE-tired” community-labor-environmental and justice organizer, writer, musician and author of several books, including Many Paths to Kujichagulia (Self-Determination). Check-out samples of his musical catalog at https://soundcloud.com/search?q=jahahara Reach him c/o support@africansdeservereparations.com or FONAMI, P.O. Box 10963, Oakland, CA 94610 usa. 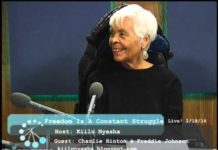 For Sistar Kiilu Nyasha: Freedom Is a Constant Struggle…