Dare to remember … It’s July 17 in Port Chicago, California, a cool summer Friday night at a naval munitions terminal 30 miles north of San Francisco. The year is 1944 and World War II is in full swing.

Segregation in the United States is prevalent and African American sailors are being pushed by their commanders to load tons of dangerous missiles and explosives onto two large munition ships. Not one of these men has been properly trained to handle munitions, yet they are given orders and expected to load huge amounts of the highly dangerous cargo as quickly as possible.

At approximately 10:17 p.m., something went terribly wrong. Explosion after explosion! So fierce, it shook the ground with the force of an earthquake, knocking out windows and shaking building as far east as Boulder City, Nevada.

What happened next is even more mind-boggling than the explosion itself. Reading the newspaper reports, you are now treading in waters filled with chaos, anger, blame, finger pointing and, more importantly, guilt.

None of these officers in the higher ranks were willing to take the responsibility for this tragedy. What happened that cool summer night? How did it happen? Why? 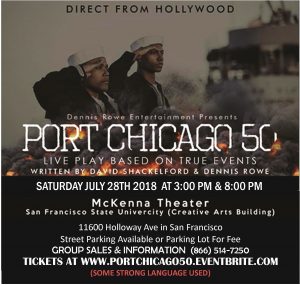 Meet the sailors before, during and after that fated night. The dramatic story is told through the eyes of one of the survivors, Freddie Meeks. Come and witness this powerful presentation of “Port Chicago 50.” I dare you!

“Port Chicago 50” is a story of love for country, the American Dream and a quest for equality and fairness.

“You, your company of actors and designers did an excellent job! It’s the next ‘Soldier Story’ play.” – Woody King Jr., Broadway producer

“This play is a tribute to what these men endured.” – Linda Armstrong, NY Amsterdam News

“Port Chicago 50” is a must see for everyone! Not only will it be a weekend of historical enlightenment but also a special time of entertainment.

There are two performances only at McKenna Theater in the Creative Arts Building on the San Francisco State University campus, 1600 Holloway Ave., San Francisco.

General seating tickets are $30 and $35 for VIP seating. Tickets can be purchased online through Eventbrite at www.portchicago50.eventbrite.com. Groups of 20 or more deduct $2.50 off each ticket. To coordinate your group or for additional information, please call 866-514-7250.

The Port Chicago Blast Commemoration begins on Saturday, July 21, at 10 a.m. at the Military Ocean Terminal Concord (MOTCO). For information, contact Friends of Port Chicago via email, at friendsofportchicago@gmail.com or visit the website: www.portchicagomemorial.org.

Ronald Johnson can be reached via rowemanempire@hotmail.com.