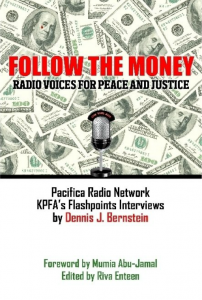 Robert DeNiro recently fired off a few f-bombs at Donald Trump, but where were he and his grandstanding liberal friends when Obama was dropping more drone bombs and “removing” more immigrants than any president preceding him? Where were they when the Clintons were pimping poverty and peddling influence through the State Department and the Clinton Foundation?

“Follow the Money” can at the same time serve as an organizing and networking manual, because it’s filled with the voices of those fighting back – and the names of their organizations. In the current Web-based information environment, they should be easy to find.

There’s much to fascinate in this book, which begins with a forward by Mumia Abu Jamal, but I was most fascinated by “Suffering in Every Bite: Migrant Workers Bitter Fruit,” an interview with Seth M. Holmes, physician, medical anthropologist and author of the book “Fresh Fruit, Broken Bodies: Migrant Farmworkers in the United States.” I read this interview several times.

In the classic method of anthropological field research, Holmes spent 18 months migrating with indigenous Mexican migrants from the state of Oaxaca, beginning in Washington state, where they lived in a labor camp and picked strawberries. He shared a slum flat with the same group in central California and crossed the border with them multiple times to pick crops in the U.S. and to plant or harvest corn in Oaxaca, but he was “never able to keep up with the other folks” no matter how hard he tried.

He’d have been fired many times, he said, if he hadn’t been a white academic of some interest to farm owners. “Farmworkers are not unskilled labor; they are very skilled,” he concluded. He couldn’t pick 50 pounds of strawberries – of the appropriate ripeness, without leaves – in an hour, but if they couldn’t, they were fired.

There’s much to fascinate in this book, which begins with a forward by Mumia Abu Jamal, but I was most fascinated by “Suffering in Every Bite: Migrant Workers Bitter Fruit,” an interview with Seth M. Holmes, physician, medical anthropologist and author of the book “Fresh Fruit, Broken Bodies: Migrant Farmworkers in the United States.”

Holmes felt that he had to understand both the farm work and the border to understand what they called their “sufrimiento,” their suffering in the whole process. They suffer back and hip pain from picking and abuse at the hands of border agents and “coyotes,” whom they pay to help them cross the border. Some coyotes, those known to their communities, are trustworthy, but others – strangers at the border – can be dangerous.

There are more details about buses packed full of people without air-conditioning, walks through blazing heat, predation and scams of all sorts, money changers and wire transfers, and cash stashed in zip lock bags and stuffed into mayonnaise jars.

The U.S. increased funding for law enforcement, drones, heat censors and other forms of border militarization as deaths in the borderlands increased during the two decades preceding this 2013 interview. The border patrol has put more agents at the safest crossings to force more migrants to the dangerous ones, where more of them will perish. Migrants run into rattlesnakes and people with guns, and even walk into cactuses because they can’t carry flashlights while trying to sneak through the dark.

Nevertheless, the migrants keep coming because, as one told Holmes, “There’s no other option for us. It’s either certain death in our villages where we can’t survive, largely due to NAFTA, or maybe dying on the road.” A number of Americans have been prosecuted as “alien smugglers” for going into the borderlands to leave water, offer water, or get distressed migrants to hospitals if needed.

As I read Holmes’s first-person narrative, I counted my blessings, even though the Obama years were not kind to me either. His story ends in a border patrol jail, where he is separated from the indigenous Mexican Triqui people he has been traveling with and placed in a separate cell because authorities don’t know what to make of him and his white skin, except to speculate that he might be a coyote. All the Triqui are put in another cell, then taken, one by one, to be fingerprinted, photographed and returned to their cell.

Holmes told Flashpoints host Dennis Bernstein, “There’s a lot of debate about immigrants in the abstract, without listening to the stories, voices, realities of immigrants themselves – they’re fathers, sons, daughters, wives and mothers.” He said he hoped that his work would help Americans “vote differently, think and listen differently when they hear about people dying at the border.”

Unfortunately, we know how that next round of voting worked out. Much of the rest of “Follow the Money” explains the increasing poverty and grotesque upward transfer of wealth that generated so much of the fury wrongly directed at migrants and exploited by Donald Trump on the campaign trail.

There’s also a section – “Global Militarism and Empire” – devoted to blatant disregard for the first principle of international law during Obama’s presidency. The U.N. Charter bars any nation from invading, bombing, barricading or otherwise violating another nation’s sovereignty, but if Obama ever showed any respect for the Charter, it must have been April Fool’s Day. Christine Hong speaks to “The Inverted Logic Behind the North Korea Crisis,” Antonia Juhasz to “The Oil Wars: Iraq, Kurdistan, and the Islamic State,” and Robert Parry to “A New Cold War with Russia.”

Much of the rest of “Follow the Money” explains the increasing poverty and grotesque upward transfer of wealth that generated so much of the fury wrongly directed at migrants and exploited by Donald Trump on the campaign trail.

There’s much more that has in no way lost relevance and too much to list. Mara Verhayden-Hilliard discusses FBI monitoring of the Occupy Movement, Jeff Cohen makes an argument for awarding the Nobel Peace Prize to Chelsea Manning, and Dahr Jamail reports on British Petroleum’s Gulf Coast ecocide.

On a positive note, Marxist economist and University of Massachusetts Professor Emeritus Richard Wolff suggests a path forward by helping us imagine socialism in the U.S. Wolff says that a socialist president should be no more difficult to imagine than an African American president was before 2008, but that none of Europe’s socialist presidents have undermined or overthrown capitalism. He reminds us that it’s childish to tell the American people they can “use their vote to change the inequality that the economic system has dumped on us” without taking on the control of government by those who pay for it.

Indeed. Didn’t Obama tell us to vote for hope and change while he was contracting with Citigroup, Goldman Sachs, Exelon and more of the most sociopathic concentrations of power in human history?

Dennis Bernstein is the host of “Flashpoints” on Pacifica’s KPFA Radio in Berkeley, California, and the recipient of many awards, including a Golden Reel from the National Federation of Community Broadcasters, and six Project Censored awards for investigative reporting. He can be reached at dennisbernstein@gmail.com.

Riva Enteen was raised as a socialist and has been an activist since the 1960s. Dennis Bernstein knows Riva through her work as the program director of the National Lawyers Guild for over a decade and asked her to edit a book of his interviews. She was also the chair of the first KPFA Local Station Board.

“Follow the Money, Flashpoints Radio Voices” is published by Left Coast Press, 2018. It can be ordered from Lulu Press if you’d like to avoid Amazon.