“The data revealed not only potential purposeful falsification and fraud in terms of sample and data manipulation; they also reveal the potential failure to conduct adequate scans, a lack of proper chain of custody for ensuring samples were not tampered with, extensive data quality issues including off-site laboratory data and general mismanagement of the entire characterization and cleanup project.” – EPA Superfund Manager John Chestnut

Yet, with no evidence-based human health risk data to support its pronouncement, the Navy is the lead voice in a deafening echo chamber of government officials, health department representatives and mainstream media outlets who absurdly claim no risk to public health or harm to residents, workers or the environment has occurred due to dangerous redevelopment activities on a federal Superfund site!

A federal Superfund site is, by definition, a property where the Environmental Protection Agency (EPA) used a Hazard Ranking System to calculate a score based on actual or potential release of hazardous substances causing harm to human health.

On a scale of 1 to 100, a score of 28.5 or more places a property on the National Priorities List. The Hunters Point Shipyard (HPS) has a Hazard Ranking score of 49. Thus, by legal and government standards, HPS is a harmful property and the well documented negative health impacts evident in residents living adjacent to it in the 94124 zip code of southeast San Francisco can be presumed causal.

What is harm and its meaning in legal terms? USLegal defines harm as an injury, loss or damage. Harm can be physical or psychological, actual or potential. Harm can be a material or tangible detriment. Harm principle refers to a theory of crime that an action can be banned if it causes harm to someone. As a spiritual principle, harmlessness is the meaning of a word from the oldest attested human language: Ancient Sanskrit. That word is Ahimsa.

Both the Navy and Tetra Tech issued public statements in response to “the biggest case of eco-fraud in U.S. history,” meeting legal standards as admission of harm, due to the deliberate intent to defraud and criminal negligence of Tetra Tech EM, Inc.

On a scale of 1 to 100, a score of 28.5 or more places a property on the National Priorities List. The Hunters Point Shipyard (HPS) has a Hazard Ranking score of 49.

“Tetra Tech vehemently rejects this type of activity and will pursue all legal actions available to it to recover the HARM that the actions of these former employees have caused to Tetra Tech, the Navy and the local community,” announced Tetra Tech on May 3, 2018.

“The scandal has brought on negative media attention and caused residents who moved into homes and condos next to where the cleanup is taking place to worry about their safety,” said U.S. Navy  Director of Base Closure Laura Duchnak in a  NBC Investigative Report May 4.

The Agency for Toxic Substances and Disease Registry is the federal public health agency mandated to protect human health and determine risk exposure to toxic releases at a Superfund site. ATSDR is a division of the U.S. Department of Health and Human Services and Centers for Disease Control in Atlanta, Georgia. ATSDR has a western regional office next door to the Region 9 EPA at 75 Hawthorne St. in San Francisco.

“ATSDR protects communities from harmful health effects related to exposure to natural and man-made hazardous substances. We do this by responding to environmental health emergencies, investigating emerging environmental health threats; conducting research on the health impacts of hazardous waste sites; and building capabilities of and providing actionable guidance to state and local health partners,” according to atsdr.cdc.gov.

The Human Health Risk Assessment (HHRA) process is the established approach to evaluate the potential for adverse health effects from exposure to environmental toxins. The HHRA is an integral part of the remedial response process defined by the Comprehensive Environmental Response, Compensation and Liability Act of 1980 (CERCLA), also called Superfund. The goal of the HHRA is to determine the magnitude of potential threats to human health due to exposure to hazardous substances.

Despite a mushrooming cloud of evidence, the public has been exposed to fraudulently cleared radiation contaminated soils, buildings, landfills and radioactive particles volatilized in air as a result of demolition and construction activities at HPS, neither the Navy or Region 9 EPA have requested ATSDR conduct an HHRA at HPS as mandated by CERCLA.

ATSDR conducted an HHRA at HPS in 2000 following the Parcel E landfill fire that smoldered for over 100 days – according to firefighter testimony – fueled by explosive concentrations of methane gas in surface pockets as high as 50 percent volume in air. That ATSDR assessment documented elevations in toxic air contaminants called volatile organic compounds in air samples collected at the landfill that included the World Health Organization designated carcinogen benzene.

An ATSDR HHRA is standard protocol following a harmful environmental release under the federal Superfund act. It is a logical, mandatory and necessary next step ATSDR must take.

The mushrooming scope of the Tetra Tech eco-fraud scandal at HPS has led to criminal indictments of two radiation control supervisors. In March of 2008 the Navy and EPA concluded in separate reports that, in addition to thousands of fraudulent soil samples collected by Tetra Tech employees documented in the internal investigation spanning 2008–2012, 28 fraudulently cleared buildings have been identified on five land parcels at HPS and 93 percent of soil samples collected on three land parcels transferred to the City and County of San Francisco in 2015 are flawed by “potential falsification, data manipulation and data quality concerns.”

These parcels are adjacent to townhouses and condominiums where families with children and pets reside.

Adding to the public health crisis at HPS is whistle blower corroboration that in February of 2015, nine trucks carrying 218 tons of radiation contaminated soils from HPS were dumped in the Keller Canyon landfill in Pittsburgh, California – within half a mile of over 2,000 homes. That soil, deposited in an unauthorized landfill in Contra Costa County, has been excavated and tests positive for Cesium 137.

It may also contain products of nuclear fission, strontium 90 and plutonium 239. Ongoing investigations are underway to determine if local drinking water sources have been tainted.

The U.S. Navy and the Region 9 EPA’s failure to request an ATSDR HHRA at HPS is a clear example of governmental neglect, developer collusion and protection of self interest in ongoing efforts to suppress health surveillance data from this vulnerable community.

The Navy shares culpability in creation of circumstances granting Tetra Tech unbridled control over speedy radiological removal operations at HPS. In 2006 the Navy implemented a base-wide Time Critical Removal Action Program (TICRA) granting full responsibility to Tetra Tech from 2006 to 2015. TICRAs are operations taken outside of the nine-step remediation process outlined by CERCLA.

The U.S. Navy and the Region 9 EPA’s failure to request an ATSDR HHRA at HPS is a clear example of governmental neglect, developer collusion and protection of self interest in ongoing efforts to suppress health surveillance data from this vulnerable community.

While, in select circumstances, TICRAs can speed removal of hazardous substances to benefit public health, they do so at the expense of accurate human health risk assessments and CERCLA protections. Thus, the Navy’s base-wide TICRA program granted Tetra Tech license to “run amok” at HPS with minimal federal oversight. And in an effort to protect itself from legal liability, the Navy repeatedly claims there has been no harm to public health. 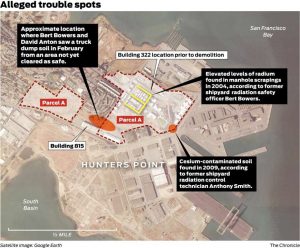 In 2005, as the chair of the Radiological Subcommittee of the Hunters Point Shipyard Restoration Advisory Board, I challenged the Navy’s TICRA program, recognizing its potential for misuse driven by political corruption and developer influence. As a former physician specialist for the San Francisco Department of Public Health and attending physician for the Palo Alto Veterans Administration Environmental Registry, I called for an ATSDR Human Health Risk Assessment in comments submitted to the U.S. Navy Base Realignment and Closure Program on June 16, 2018, and to the federal and Region 9 ATSDR administrators:

“I call on the Agency for Toxic Substances and Disease Registry, in its role in determining chemical threats, protecting communities with children and vulnerable populations who face dangerous environmental health concerns, to initiate the health assessment process at HPS to determine whether residual ionizing radiation documented in fraudulently cleared soils, trenches and buildings at multiple sites on the base pose a risk of harm to the surrounding community, workers and visitors and to statistically define that risk. I am formally requesting the National Center for Environmental Health and ATSDR Region 9 Director Libby Vianu and Environmental Health Scientist Benjamin Gerhadstein direct ATSDR to conduct a human health risk assessment of the Tetra Tech radiation scandal at HPS.”

On June 28, 2018 I received a call from Libby Vianu, regional director of ATSDR, informing me the national director will initiate a Human Health Risk Assessment at the Hunters Point Shipyard ,  a federal Superfund site. In the neighborhood where I grew up! 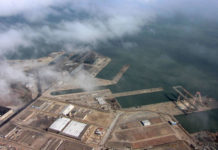