Over two months have passed since Meghan Markle’s televised royal wedding. And yes, I did look forward to her marrying England’s Prince Harry, youngest son of Prince Charles and the late, internationally loved “people’s advocate” Princess Diana. Tears actually surprised me watching the May 19 event unfold – but not for the standard idolized glitz or glorified upper crust glamour.

My fairytale scope anticipated significant doses of a broader magnificence – elements absolutely foreign in this level of restricted, well-guarded protocols. Astonishing cultural precedence might here be set, ringing well into posterity. It is the true source of what ran off with my emotions – one I feared heartland Afro-America might just sleep through – or patently ignore.

Tears actually surprised me watching the May 19 event unfold – but not for the standard idolized glitz or glorified upper crust glamour.

Markle did scratch her way up into the “celebrity aristocracy” ranks, meeting Harry through a mutual show business friend. But Markle is not the standard initiate, gaining carefree ground while not ever caring to look back. Offspring of an African-American mom and a Caucasian dad, she instead proudly declares being a “strong, confident, mixed-race woman” – staunchly affirming a Black heritage, environmentalist and feminist activist positions.

The newest princess here promised to upset the cart – exceptionally inserting her own designs in this legendary imperial event. And for traditionalists and those distinctly relegated as outsiders, she truly did not disappoint.

The newest princess here promised to upset the cart – exceptionally inserting her own designs in this legendary imperial event. And for traditionalists and those distinctly relegated as outsiders, she truly did not disappoint.

A wry sensation struck me, watching anticipation beam behind stiff faces of European nobility, the air palpable with the same groundbreaking anticipation I felt – their stoicism though, swollen with unsure energy, baring both dread and excitement regarding an intrusion’s possibilities – the moment quite juicy unto itself.

Emerging (from a Rolls-Royce Phantom VI – only 16 exist), Markle made her first unique statement, walking halfway alone as an independent woman to meet future father-in-law Prince Charles, who escorted her to the groom. The ceremony yielded standouts: a local gospel choir directed by Black Britain Karen Gibson gave a through-the-roof rendition of Ben E. King’s “Stand by Me,” and a mesmerizing solo was played by 19-year-old male cellist Sheku Kanneh-Mason.

But the absolute gem: Markle introduced to both America and the world the Rev. Michael Curry. The first African-American ever to preside over the U.S. Episcopal Church, he affirmed being soundly grounded in Civil Rights legacy.

Rev. Curry’s 14-minute sermon did an astounding thing, flooding the space with Afro spiritual richness, inherited from an unbroken line of Black freedom fighters. Dr. King’s dissertation on “love” being the base of his presentation, Rev. Curry stated, “We must discover the redemptive power of love.”

Rev. Curry proceeded to lecture the detached governing elite on the broader powers of essential love and the critical need to move their subjective love beyond privileged inner circles to the disenfranchised they actually govern.

Then Curry offered a jaw-dropper – driving this home by actually quoting American slaves, saying even from brutal captivity Africans maintained humanity, reminding: “There’s a balm in Gilead to make the wounded whole … to heal the sensate soul.”

Evoking love’s might pounded the walls, its ability to “end poverty … create new humanity … a sanctuary earth. … Imagine governments and businesses when love is the way,” there’s room for “all God’s children,” he preached, and, importantly for all – learn to “love yourself!”

But the absolute gem: Markle introduced to both America and the world the Rev. Michael Curry.

Curry’s stunning capper quoted Pierre Teilhard de Chardin, “a French Roman Catholic (England’s age-old territorial and religious enemies), 20th century Jesuit scholar, scientist and mystic” – in an Anglican Chapel. Chardin’s connection message, on humankind’s profound life-changing discovery of “fire”: “If humanity ever captures the energy of love, it will be the second time in history that we have discovered fire!”

I was astounded! Looks in the room were priceless!

Many think Markle’s the first Black British royal, but thanks to her arrival – compelling Anglophiles to revisit a well buried imperial secret – and diligent research by historian Mario De Valdez y Cocom, a former resident of Belize, the cat’s solidly out of the bag. And it’s huge!

German Princess Sophia Charlotte, daughter of Prince Charles Louis Frederick of Mecklenburg and Princess Elisabeth Albertine of Saxe-Hildburghausen, was born in 1744. Back in the 13th century, Portuguese King Alfonso III had conquered the Moorish (Afro) town of Faro, winning the governor’s daughter Ouruana as a concubine.

And this: Queen Victoria (1819-1901) was the only child of George and Charlotte’s fourth son Prince Edward, Duke of Kent and Strathearn. Interestingly, Queen Elizabeth II and Prince Philip, Harry’s grandparents, are both direct descendants of Victoria.

It means the obvious: A vein of Afro blood courses directly down to Harry. It makes Elizabeth II’s bestowal of Duke and Duchess of Sussex understandable – and fascinating!

The very first – and only – Duke of Sussex before Harry was Charlotte’s sixth son, Prince Augustus Frederick (1773-1843). Queen Victoria’s “rebel” favorite uncle broke much protocol – the Prerogative Court annulled his two unapproved marriages, so there never was a duchess). Still, Augustus – advocating for social underdogs, the disenfranchised and parliamentary reform – as a staunch “abolitionist” – must have soared as a pioneer model for 20th century humanitarian Princess Diana, who groomed Prince Harry.

It’s no surprise that  Charlotte’s favorite portrait artist was Sir Allan Ramsay, a rigorous abolitionist. Ramsay was married to Chief Justice Lord Mansfield’s niece and was uncle-in-law to Mansfield’s ward, Dido Elizabeth Belle Lindsay, the slave child reared as a royal – whom Gugu Mbatha-Raw portrayed marvelously in the 2013 movie “Belle.”

The new – and very first – Duchess of Sussex, Meghan Markle Windsor, truly has ushered in a revolutionizing, eye-opening era, riding the new tide of acceptable adjustment in royal British standards. She is also first in declaring herself a feminist and to actually affirm her Afro heritage – in modern times.

Yes, tears escaped me before Meghan’s entourage even headed out, riding toward history-making at St. George’s Chapel – where Queen Charlotte is actually buried. I was graced by a diligent, unflappable Diaspora – her spirit crashing through shadowy disguise to unseat heavyweight denial – inspiring my intuitive eyes to not overlook this epic, Afro legacy prize. 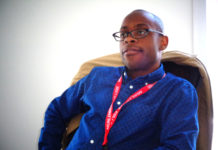