Bobi Wine, Ugandan pop singer, parliamentarian and opponent of Ugandan President Yoweri Museveni, was arrested on July 17. His lawyers report that he has been beaten so badly by Ugandan police that they weren’t sure he understood the charges read when he was brought into court. After seeing him in the Makindye Military Barracks, his wife Barbara reported:

“His forehead is bruised and his eyes are red. He has many wounds including one on his ear. He seems to have been punched many times on the face. He cannot walk. He was carried into the room where we saw him. He cannot sit straight. He speaks with difficulty and has a lot of pain breathing.

“I have seen many victims of torture – never have I seen anyone in the state which Bobi is in! When he narrates these stories, you see the kind of trauma he is going through. When you set your eyes on him, you cannot help but wonder what kind of human beings can do such things to a fellow human being.”

Bobi Wine’s driver was shot dead in the driver’s seat of his car before he and more than 30 of his allies, many of whom are also members of Parliament, were arrested. They were campaigning for parliamentary candidate Kassiano Wadri in Arua, a rural district of Uganda, when they were arrested.

President Yoweri Museveni, who has held a tight grip on power for 32 years, was there campaigning for Wadri’s opponent. Wadri won the election from prison, but he’s since been charged with treason and obviously won’t be taking his seat if convicted.

Bobi Wine was at first charged with treason as well, but his charges have since been reduced to illegal possession of a firearm. A martial court released him because the firearm possession charge was impossible to prove; the owner of the hotel he was staying in said that firearms would not have been allowed on the premises.

Wine was nevertheless immediately re-arrested and charged with treason again, this time in a civilian court. The treason charges allege that someone threw rocks at the bulletproof back window of President Museveni’s vehicle while he was campaigning in Arua and that the politicians campaigning for Wadri had engineered the rock throwing.

Bobi Wine, Ugandan pop singer, parliamentarian and opponent of Ugandan President Yoweri Museveni, was arrested on July 17. His lawyers report that he has been beaten so badly by Ugandan police that they weren’t sure he understood the charges read when he was brought into court.

Museveni isn’t known for worrying about the credibility of charges filed against his opponents, but he is well known for torturing them, as reported annually by Human Rights Watch, most thoroughly in its 2004 publication “State of Pain.” (Human Rights Watch is often guilty of politically agendized reporting, particularly on matters of war and peace, but most of their research into basic human rights abuse is credible and confirmed by reliable sources.)

“State of Pain” reported that the state’s use of torture had been escalating since 2001, and that:

“Forms of torture in use in Uganda include kandoya (tying hands and feet behind the victim) and suspension from the ceiling of victims tied kandoya, ‘Liverpool’ water torture (forcing the victim to lie face up, mouth open, under a flowing water spigot), severe and repeated beatings with metal or wooden poles, cables, hammers and sticks with nails protruding, pistol-whipping, electrocution, male and female genital and body mutilation, death threats (through showing fresh graves, corpses and snakes), strangulation, restraint, isolation, and verbal abuse and humiliation. Some of these practices have resulted in the death of detainees in custody. An informal survey at Kigo Prison near Kampala, where ‘political’ cases are held, indicated in June 2003 that 90 percent of detainees/prisoners had been tortured during their prior detention by state military and security agencies.”

Who is Bobi Wine? 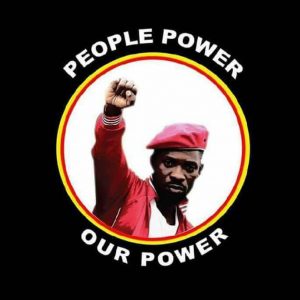 Wine’s given name is Robert Kyagulanyi Ssentamu, but he’s widely known by his performance name, Bobi Wine. He rose from a ghetto in Kampala, Uganda’s capital, to earn a degree in music, dance and drama at Makerere University and became a hugely successful pop singer, much admired by Ugandan youth.

In his music, he advocates for the poor and for national unity. In one video he wore a t-shirt printed with the Occupy chant “We are the 99%.” In July 2017, he was elected to Uganda’s Parliament in a landslide.

Despite his success, Wine remained in the ghetto and became known as the “Ghetto President.” He never planned to leave the ghetto, he said, but to make it a better place.

He did build a large family compound, which someone threw explosives into last year. They caused only property damage, no injury to his family, but Ugandan police, unsurprisingly, have never identified the perpetrator(s). At the time, Wine had been vocal in his opposition to eliminating the presidential age limit in the Ugandan Constitution to allow Museveni to remain in power.

Ugandan youth have rioted for Bobi Wine’s freedom, battling heavily armed police, since he was arrested. It’s reported that police fired both tear gas and live ammunition at them, but no deaths had been reported as of Aug. 21.

Bard College professor Helen Epstein spent decades doing public health research in Uganda and neighboring countries before writing “Another Fine Mess: America, Uganda, and the War on Terror.” She wrote about the context of Bobi Wine’s arrest on the website of the Vanguard Africa Foundation:

“Kyagulanyi’s [Bobi Wine’s] most recent ordeal has been unfolding under the horrified gaze of thousands of fans on social media. Youths in his neighborhood rioted on Thursday and Friday. On Friday, the U.S. Embassy and European Union finally issued a statement expressing concern about the events and urging the Ugandan government to respect its own Constitution, but neither suggested that Museveni’s government would suffer any consequences for their actions.

“In order to understand the muted tone of these statements – and, no doubt, the others to come – it is important to know that Museveni is probably the West’s strongest military partner in Africa. Ugandan troops are fighting on behalf of the U.S., U.K. and E.U. in Somalia, as well as serving as guards alongside U.S. troops in Iraq. What is more, France is training Uganda’s army along the border with Congo, and Ugandan troops are also reportedly preparing to join the Saudi-led coalition in Yemen.”

The U.S. is far and away the top bilateral donor to Uganda. In December 2017, the Organization for Economic Cooperation and Development (OECD) reported that the U.S. had contributed three quarters of the Official Development Assistance (ODA) that Uganda received in the previous year.