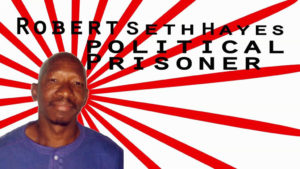 Amsterdam News, Aug. 9, 2018 – Having been incarcerated since 1973, original Black Panther activist Robert Seth Hayes, 69, was released on parole last Tuesday. He joins a short list of revolutionaries from the 1960s and 1970s who are now hitting New York’s streets as elderly men after spending decades in the belly of the beast, simply for fighting for their freedom.

Hayes denied participating in the June 1973 Bronx shooting death of New York Transit cop Sidney Thompson, but he was arrested, convicted and sentenced to 25 years to life nonetheless. He had been hit with “five counts of murder, attempted murder, third degree criminal possession of a weapon and multiple counts of robbery.”

Even though he has maintained a clean disciplinary prison record, has been eligible for parole since 1998 and has been in poor health in recent years, he has continuously been denied after each hearing, every two years. The Parole Board argued that “he remained a threat to society.”

After 10 failed attempts, he was finally granted parole on his 11th try, 20 years later.

“We are elated to report that respected elder Robert Seth Hayes was granted parole and released July 24, 2018, having met all criteria for release according to his sentence,” read a statement from the New York City Jericho Movement. “The parole commissioners recognized his progress after serving 45 years in prison and granted his parole application at his 11th parole hearing. He is looking forward to being reunited with his family and friends. We welcome him home! We spoke with Seth today, and he is grateful to all of his friends and supporters. Once he gets settled in, he plans to write a statement of his own.”

There are still more than two dozen “political prisoners of war” who remain captured behind enemy lines. Ten have died while there, since 2010. Many of the militants were in their early twenties when they joined revolutionary organizations and took up arms to combat police terrorism. They fought for Black Power, and many were framed and incarcerated, or lost their lives in the trenches while fighting.

This story first appeared at http://amsterdamnews.com/news/2018/aug/09/political-prisoner-war-robert-seth-hayes-paroled-a/.