by the Law Office of Yolanda Huang

Oakland – The Alameda County Sheriff’s Office (ACSO) and a for-profit health care provider it contracted to provide medical services to inmates at the Santa Rita county jail are being sued for failure to provide medical care to a pregnant inmate, locking her in an isolation cell even as she was in “the throes of childbirth” and ignoring her screams for help, according to a new federal civil rights lawsuit filed here Aug. 20.

The conduct was “barbaric … that has never been condoned by any civilized society,” much less the United States and the people of the state of California, “motivated by greed and was inflicted on Plaintiff … for the sole purpose of pursuing profit at the expense and by the suffering of wards of the state such as Plaintiff,” according to the lawsuit filed by Bay Area civil rights lawyer Yolanda Huang on behalf of Candace Steele, a former Santa Rita Jail prisoner.

Ms. Steele had “given birth alone and in pain, without medical care or any other assistance from CFMG, in a cold, concrete, dirty isolation cell at Santa Rita Jail.”

CFMG contracts with ACSO to provide pre-natal, gynecological, obstetrical and maternal services at Santa Rita Jail, and the lawsuit contends there is a reason for CFMG to not send Ms. Steele to a hospital: If an inmate delivers her baby in a hospital, CFMG must bear the cost; if the inmate is forced to deliver the baby at the jail, there is no cost to CFMG.

Therefore, according to the filing in U.S. District Court for the Northern District, San Francisco-Oakland Division, ACSO’s contract with the CFMG “creates a financial incentive and imperative for CFMG to refuse and withhold inpatient hospitalization services to all inmates, including inmates in active labor.”

Although admitted to the hospital days earlier, Ms. Steele, on July 23, 2017, complained of cramping and pain, and could not walk and was only able crawl on her hands and knees. Other women in the jail reported to jail staff that Ms. Steele was in clear medical distress.

A CFMG nurse examined Ms. Steele, announced that Plaintiff was not dilated, was only eight months pregnant, only had a stomachache, and was exaggerating her distress. The deputies then placed Ms. Steele in an isolation cell – not cleaned – with a metal and concrete bed, metal door and toilet – as punishment.

Ms. Steele began screaming in pain, but, as is the lawsuit charges, the deputies closed the window to muffle the sound of her screaming. No one, according to the lawsuit, did anything to help Ms. Steele for many hours.

Eventually, the screaming stopped, and other inmates could hear the sound of a crying baby – Ms. Steele had “given birth alone and in pain, without medical care or any other assistance from CFMG, in a cold, concrete, dirty isolation cell at Santa Rita Jail.”

Of note, the baby was born with the umbilical cord wrapped around its neck. “Out of pure instinct (the mother) put her fingers into the baby’s mouth to open its airways so that the baby could start breathing. After the baby’s birth, Plaintiff had no means to wash or clean the baby or herself. Plaintiff had no blankets, towels or other materials to swaddle or wrap the baby in,” read the federal filing.

The Santa Rita jail differs from San Francisco and Contra Costa counties, where the respective counties do not use a private medical provider and instead use county departments of health, which have no such financial incentive to deny care. 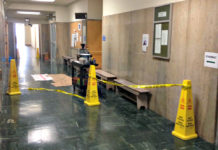