Formerly incarcerated people overwhelmingly want to work, but they face huge obstacles in the job market

For the 5 million formerly incarcerated people living in the U.S., landing a job means more than just personal success: It means finding a place in their communities and being able to care for their loved ones again.

It’s well known that the obstacles to finding a job are severe for people who have been to prison. The scale of this problem, however, has been difficult to measure – until now.

In “Out of Prison & Out of Work,” the Prison Policy Initiative calculates that 27 percent of formerly incarcerated people are looking for a job but can’t find one.

This rate, which surpasses anything Americans have experienced since the height of the Great Depression, is especially striking given the report’s other findings:

“These high unemployment rates reflect public will, policy and practice – not differences in aspirations,” said author Lucius Couloute. In the report, he lays out policy solutions for closing this vast employment gap, including:

“Out of Prison & Out of Work” is the first of three reports to be released by the Prison Policy Initiative focusing on the struggles of formerly incarcerated people to access jobs, housing and education. Utilizing data from a little known and little used government survey, Couloute can describe these problems with unprecedented clarity.

In this report and the two more to follow, he recommends reforms to ensure that formerly incarcerated people – already punished by a harsh justice system – are no longer punished for life by an unforgiving economy. 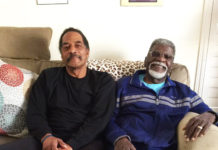 What do we do next? 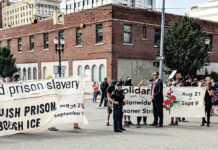 Lansing and Chicago on the march as National Prison Strike grows