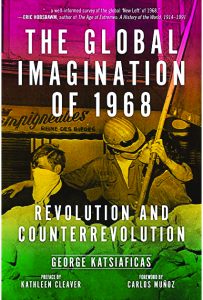 So, seeing the top layer of Black Lives Matter founders and leaders associating with rabid class enemies and gladly attending their galas, all of this derives from not knowing who the real class enemy is, and what must be done to transform the oppressed community into revolutionary bastions of political power.

Political organizing must be directly in the interest of the people, and the issues involved must be organically linked to the oppressed community. And Comrade George Katsiaficas, in his latest book, called “The Global Imagination of 1968: Revolution and Counterrevolution,” provides an answer to the many questions our revolutionary movement is struggling with every day.

Movement people must start reading the great works from the past that give us the first steps of understanding how we can set this oppressive and neo-liberal world on fire. One of the good things about the book “1968” is how it delineates for 21st century revolutionaries the international composition of revolutionary activity in every country on the planet.

“1968” shows us clearly that focusing exclusively on sectarian issues and being dogmatic is the poison that will slowly kill our ability to be effective. So, when we build base areas of political power in our oppressed community, we must build and develop coalitions and alliances similar to what the original Black Panther Party did 50 years ago.

The original Black Panther Party is loved and held up today because their politics of Marxism-Leninism-Maoism worked. Groups today, in the 21st century, plaster Comrades George Jackson, Huey P. Newton, Fred Hampton, Angela Davis and Assata Shakur on their phones, Facebook pages and Instagram accounts, but they do not practice anything these comrades died or went into prison and exile for. And they wonder why they are the only ones at these events every time one is called. It’s incorrect politics, folks.

So, have the courage to read Comrade Katsiaficas’s “1968” book. You will discover how to develop the living soul of activism. “1968” is a seminal study in revolutionary activity. Period.

It will not make you get off the couch. It will not force you to be other than who you are, but what it will do is give you a start on how to internationalize our movement and politics.