Poor is the word without the deeds

poor the deeds without the WORD –

his determination exposed the people’s cries we HEARD –

Toe-to-toe with the message get up move something even

with your back pressed against the WALL –

We saw him dressed Panther-down that classic black and blue –

The audacious style and swagger the oppressors never KNEW –

that promissory note of freedoms too damn long OVERDUE – 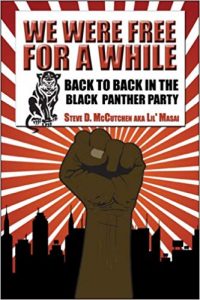 Panther rushed out of Oakland into the world SPOTLIGHT –

even if struggle brings about a war to the KNIFE –

that down home stump jumpin’ flavor to the table shared the

visions that the POWER of the people is

not subject to the oppressor’s CONTROL –

street legends from the hood or round the WAY –

at the front gates of his people’s survival and LIBERATION –

what we will is what we CAN –

from true freedoms one generation to the next DEMAND –

call that honored arrival our beloved Speaker of the House

None other than the indomitable BIG MAN.

Eloquently but simply I speak for the voiceless I come for what’s MINE.

Steve D. McCutchen, known as Lil’ Masai, a Baltimore native, is a 10-year veteran of the Baltimore and Oakland branches of the Black Panther Party, 1969-1979. Moving to Oakland in 1972, as a rank-and-file Panther, he taught math and physical education at the Party’s Oakland Community School and directed the Oakland Community Learning Center Martial Arts Program, later making a career of teaching in Oakland public schools – first math, later, at Castlemont, history and ethnic studies. He is the author of “We Were Free for a While: Back to Back in the Black Panther Party” (2008) and contributed a chapter to the 1998 classic “The Black Panther Party (Reconsidered).” He currently serves on the Communications Committee of the National Alumni Association of the Black Panther Party (NAABPP) and can be reached at sevenshadows@earthlink.net.