The mother who filed judicial recall notices against Contra Costa Judges Fannin, Hardie and Haight has been threatened in an attempt to silence her. The week she filed the notices, when she visited with her daughter in CPS (Child Protective Services) care, she was forced to accept a mandatory police escort. She was humiliated; her small daughter was terrified.

She was told by her children that they were threatened with being “put in juvenile hall or ‘escalated care’” if they did not agree to testify against their mother. She says her children told her all of the social workers, CPS attorneys and judges were in on it.

The police officer called by CPS social worker Edyth Williams for the escort arrived five minutes before the end of the scheduled visitation and waited for the mother in the doorway. This served no apparent purpose other than to humiliate the mother in front of her child, to send the mother a clear message to stop seeking judicial recall and to strike fear into the heart of the daughter.

There are enough parents now coming forward to show that this pattern and practice of striking fear into the children of targeted parents to shut the parents up is routinely used. In essence, courts and court workers are targeting what the parents love the most, their children, in order to stop their whistleblowing.

The mother who filed judicial recall notices against Contra Costa Judges Fannin, Hardie and Haight has been threatened in an attempt to silence her.

The mother recalled the look of horror and fear that struck her 8-year-old daughter’s face when the police officer showed up to escort her mother away. The child had no idea what they were doing to her mother.

The mother said she will never forget her daughter’s terrified face – and the gut-wrenching feeling of power being abused. The mother’s lawyer has been contacted regarding this incident, a complaint is being filed, and local journalists have been provided all relevant documentation.

A long history of judicial retaliation that is under-reported

It is well-known that whistleblowers against government agencies, particularly any part of the judicial branch, have historically suffered from retaliation, threats and even death. Very often, the whistleblowers are publicly humiliated, defamed or are conveniently and deliberately “removed” from activism.

In any realm of the judicial process involving children, mass media has functioned as propaganda to delude the public into believing that government child welfare agencies are acting in the best interest of families. The reality is that the proceedings, in fact, appear lawless and the judges’ decisions are often unsupported by evidence.

With juvenile dependency court cases and some family court cases where the parents were never married (referred to as “Closed Parentage” or “CP” cases), the hearings occur confidentially and often in the judges’ chambers without parents present. Child Protective Services has come under recent scrutiny in California by local parenting groups.

It is well-known that whistleblowers against government agencies, particularly any part of the judicial branch, have historically suffered from retaliation, threats and even death.

California boasts the highest rates of human trafficking in the United States, with San Francisco identified as one of the “cities with high-intensity child sex trafficking” (Garcia, 2018).

In juvenile dependency proceedings in Contra Costa County Superior Court, children are often under the threat of being placed in escalating security levels of juvenile detention facilities and group homes. The children are often coerced and coached to testify against their natural parent(s).

As shown in the evidence from Judge Lois Haight’s courtroom, minor children in the cases before Judge Haight have complained of duress, coercion, coaching and threats from the very people who are purporting to protect them, such as CPS social workers, minor’s counsel and judges.

Minor children in the cases before Judge Haight have complained of duress, coercion, coaching and threats from the very people who are purporting to protect them, such as CPS social workers, minor’s counsel and judges.

The child also elaborated in his testimony that he was told to state lies on the witness stand, which the transcripts reflect. Another child stated he was threatened that he would be forced into escalated home care situations if he did not go along with saying on-record what he was being coached to say by CPS attorneys and social workers.

While on the stand in Judge Lois Haight’s courtroom, minor children have said that they were repeatedly coached to testify against their parents. Children are even threatened and told that they are never going to go home. In one case, a boy stated that the minor’s counsel, Judith Lawrence, repeatedly warned him of that.

In the text conversation between two brothers shown here, the younger of the two brothers reported that he was told by his county selected court forced lawyer, Judith Lawrence, and Judge’ Lois Haight that he could not ever return home to his mother. This child has become depressed to the point of suicidal ideation and he feels that he has been kidnapped from his loving family, force separated from his siblings, and is being held hostage. 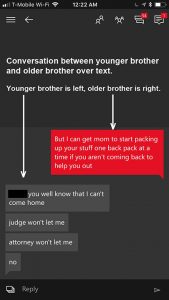 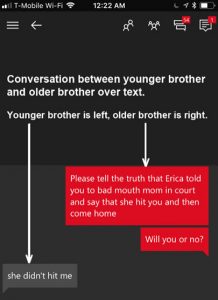 This is an example of a common trick played upon minor children by their CPS lawyers to alienate them from their parents and to cause the children to question and doubt their parents. Many children in the system are intentionally turned against their parents.

This intentional infliction of alienation of affection leaves children damaged for life. Also, under the pretext of returning the children to their parents, the court actors make the parents admit to crimes they have never committed, leaving these parents stigmatized for life. In these cases, there is almost always no evidence or insufficient evidence that any crime has ever been committed.

One of the little known aspects of Child Protective Services pattern and practices, not commonly known among the public at large, is that they force a parent, as a condition to having their child returned, to admit to something that they may or may not have done. The forced admission of guilt has high repercussions against the parent.

It limits the parent’s opportunities for future employment and foreign travel. For example, Canada does not allow admission into their country if you have an admitted assault on your record. This is a demand placed on the parent for their child’s return by the courts of CPS even when there is no evidence that the parent has done what the court is demanding the parent to admit to.

Forced admissions of guilt under duress

CPS uses the term “being in denial” if the parent refuses to comply. This means if you insist you are innocent, when you are, the courts and CPS use this as a reason to adopt out your child. This practice brings in huge adoption fees and it is very profitable to the agencies.

They make hundreds of millions of dollars off the backs of these families. The most targeted families in CPS cases appear to be minorities and single mothers.

If the court had evidence that a parent is guilty, then no process of forcing a parent to admit to guilt would be necessary. This forced admission of guilt by CPS is a condition in instances where there is insufficient proof of a parent’s wrongdoing, and CPS and/or the court holds the child for, in essence, ransom.

Accused parents are commonly given a “family reunification plan” which requires admission of whatever the parent is charged with – even when it may not be true. This is so the county can bilk the families for sometimes hundreds of thousands of dollars for forced court-ordered services.

If the court had evidence that a parent is guilty, then no process of forcing a parent to admit to guilt would be necessary.

If there was evidence, and it was clear and convincing, CPS would not be forcing parents into an admission of guilt as a prerequisite to having their children returned.

Ultimately, if parents admit to guilt when they are not guilty, they are unable to seek damages in a lawsuit. Also, these parents are unable to clear their name and remove themselves from the CPS system when they are forced under duress into false admissions of guilt. CPS then continues to track and monitor the family throughout the children’s lives, and when those children marry and have their own children, CPS injects themselves into the family’s lives and starts the cycle all over.

The practices of CPS are criminalizing many otherwise innocent, fit, loving parents for profit. CPS and Family Court draw parents into a “system” which they are unfamiliar with and typically have no need for. The courts and CPS create a fictitious requirement for these parents to spend upwards of six figures, and in some cases even more, in legal fees to defend themselves.

This forces parents to hire attorneys that most parents have to personally pay for themselves. This can and does bankrupt families. California Protective Parents Association reported that in approximately 27 percent of “high-conflict” aka domestic violence court cases, parents who are wanting their children returned are being forced to defend themselves and their children. This often costs parents everything financially, physically and mentally that they have, and more, forcing them to declare bankruptcy and worse.

Commonly, CPS refers parents to their own “preferred” medical providers. If parents get an opinion from their own privately obtained and privately paid medical provider and the court does not like the opinion of that evaluating physician, in numerous instances, CPS has outright refused to accept the evaluation.

Psychological evaluations typically cost parents upwards of $5,000-$6,000 based upon the demands of the court, but these costs are paid for by parents out-of-pocket. The courts do not reimburse these expenses and readily hand out demands for them implying most or many parents are crazy.

The court did not like this, so they demanded that the court be able to contact the specialist themselves and to explain their analysis of the mother’s anger management issues, in an attempt to sway the specialist’s understanding of the mother.

Often, the court and CPS rulings appear to be misogynistic in nature. The courts have become expert at taking any controversial or heated societal dilemma and monetizing it within their system.

The bottom line is we have a predatory system in place, called Child Protective Services and Family Court that is really more like child predatory services and anti-family court. The predatory family courts are trafficking our children and families for county and state profit, and it is us, the taxpayers, who are funding it.

The bottom line is we have a predatory system in place, called Child Protective Services and Family Court that is really more like child predatory services and anti-family court.

If anyone dares to blow the whistle to expose the corruption, then retaliation is swift and usually brutal, even physical. This can and has led to litigants’ deaths in this county.

Kristie Karkanen, whose background is in marketing and communications for technology companies and advocacy work for senior citizens and children, can be reached at kkdesign@gmail.com.