San Francisco – Raw sewage overflows since January 2017 at the San Francisco’s main 850 Bryant St. jail are making prisoners sick, according to a class action lawsuit asking for $150,000 or more in damages filed July 30 against the City and County of San Francisco, the Sheriff and other law enforcement personnel.

The raw sewage spill was reported in the District Attorney’s Office in January 2017 but not in the jail.

“Inmates who have come into physical contact with the sewage have developed skin rashes … intestinal problems, lung problems, breathing problems and headaches. Inmates have slipped and fallen on the sewage and slippery floor, injuring themselves and then contracting skin rashes,” according to Bay Area civil rights lawyer Yolanda Huang, who filed the action on behalf of at least seven named inmates.

The prisoners, who are in “A-Block,” are locked inside their cells 24-7 and spend no more than three hours a week outside those cells, which have been hit by regular, frequent and ongoing sewer backups, causing sewage, feces, urine and other bio-hazardous materials to spew out from the toilets. The sewage sometimes just overflows; other times the backup is explosive and sprays.

Raw sewage overflows since January 2017 at the San Francisco’s main 850 Bryant St. jail are making prisoners sick, according to a class action lawsuit asking for $150,000 or more in damages filed July 30 against the City and County of San Francisco, the Sheriff and other law enforcement personnel.

According to Ms. Huang, when sewage backflows out of the toilets, inmates are required to yell “Water!!” and sheriff’s deputies need to unlock a closet and shut off the entire water system for at least A Block. The prisoners claim the water shut-off affects other blocks as well.

“Once the wet blankets are removed, the inmates who live in these cells are usually required to clean the floors … Supplies provided inmates are inadequate, do not disinfect and are provided for limited time periods … The floors and furniture inside these cells are never truly disinfected. The foul smell and odors are pervasive. During this entire period, prisoners are forced to remain in their cells (and) forced to eat in their cells while there is sewage on the floors.”

Ms. Huang said that even after much of the sewage is sopped up and removed, the water remains turned off. Inmates cannot use the bathrooms and have no water to drink. Even during hot days, inmates are forced for long periods of time to be without water. Access to the bathroom is not usually provided, and inmates are forced to hold their bladder and bowels, including those with prostate problems.

Inmates often lose personal property and canteen items when the sewage wets their property. Inmates have no choice, due to the danger of bacterial and viral contamination, but to throw their belongings out, losing hundreds of dollars of canteen items.

“Being forced to live in this unsanitary, disgusting, nauseating, offensive and outrageous situation is creating severe hardships for the prisoners … Some have developed severe psychological stress, including extreme despair and suicidal ideation,” said Ms. Huang.

The claimants are asking that the “unconscionable situation (that) has existed for an extensive period of time,” be corrected immediately by the City and County, and they are asking for damages of at least $150,000 for physical injuries, emotional stress and loss of personal property damaged by the sewage spills.

A second suit on behalf of more of the sickened prisoners was filed by attorney Stanley Goff on Aug. 12, 2018. His suit provides more information on the constantly recurring toxic waste spills San Francisco prisoners have been forced to endure for nearly two years.

While District Attorney Gascon’s offices in the same building were professionally cleaned and disinfected and the plumbing problem repaired, the much worse raw sewage spills in the jail that prisoners must live with 24/7 have been ignored. The Goff suit reports the following in its Statement of Facts:

“The City’s immediate response to this flooding was to evacuate the District Attorney’s Offices until the flooding was stopped and a Hazmat crew properly cleaned and properly disinfected the area.

“Subsequently, plumbers contracted by San Francisco placed a ‘trap’ device into the pipes at the Hall of Justice, which prevented the District Attorney’s Office from being subjected to that type of flooding again.

“However, this ‘trap’ device caused the sewage pipes to ‘back up’ and flood the jail area inside the building (County Jail #4 or CJ4).

A second suit on behalf of more of the sickened prisoners was filed by attorney Stanley Goff on Aug. 12, 2018. His suit provides more information on the constantly recurring toxic waste spills San Francisco prisoners have been forced to endure for nearly two years.

“From that time period in the beginning January of 2017 to the present, raw sewage floods have occurred almost every day and at times occur three times a day affecting inmates housed in the A-Block portion of CJ4. …

“When the raw sewage floods occur, on average, there is between a half-inch and an inch and a half of raw sewage through the entire 8-foot-by 20-foot living space in the plaintiffs’ A-Block cell.

“The plumbing in plaintiffs’ A-Block cell was such that when a toilet in the cell was flushed, sewage would back-flow into the toilet and raw sewage would overflow on the floor of the cell. When the raw sewage floods occur, the plaintiffs are able to observe visible pieces of fecal matter and used toilet tissue in the water.

“The beds in the plaintiffs’ A-Block cell do not have a storage shelf, so the plaintiffs are forced to place their personal belongings, such as books, hygiene products, commissary food items and court documents, on the floor under their bed areas. When the raw sewage flooding occurs, these personal items belonging to the plaintiffs are almost always severely damaged – contaminated – and destroyed.

“When the raw sewage flooding occurs, the plaintiffs are forced to use their own personal bedding materials (jail issued blankets) to soak up the sewage, and are not given any protective gear such as Hazmat suits or masks to clean up the sewage or provided with proper disinfectant agents to adequately sanitize the contaminated areas.

“Due to the direct exposure to the raw sewage emanating from these constant floods, the plaintiffs have developed intestinal problems, are having difficulty breathing and have been suffering from constant headaches. …

“The plaintiffs have notified defendants [the City, Sheriff and other jail authorities] and/or other Sheriff Deputies in writing of the unsanitary and dangerous conditions caused by the raw sewage flooding and have submitted numerous grievance forms giving the defendants notice of these hazardous and or dangerous conditions.

“Despite plaintiffs’ written and verbal notices to defendants, the horrendous and dangerous conditions in the plaintiffs’ A-Block housing area have never been properly addressed by the defendants and continue to this day.

“The plaintiffs filed a timely government claim against defendants pursuant to California Government Code §910, et seq. The plaintiffs’ claims were subsequently rejected by San Francisco on July 17, 2018.” Suits could be filed only after the claims were rejected.

The Goff suit calls for compensatory, general and punitive damages.

San Francisco’s main jail, on the top floors of a downtown building, is seismically unsafe and has chronic problems with rats, cockroaches and asbestos as well as raw sewage flooding. But a vigorous “No New Jail” campaign, which the Bay View strongly supported, defeated plans to replace it.

The jail population, which is 57 percent Black in a city that is 3-5 percent Black, needs to be reduced through the elimination of racist policing and bail, and the city has other jail facilities. When the plan to replace the jail was defeated, then-Supervisor now Mayor London Breed said, “850 Bryant needs to come down, but more importantly we need to tear down the system of mass incarceration it represents.” 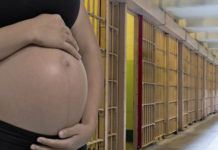