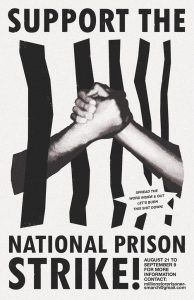 The extent of repression and retaliation by prison authorities against suspected participants in this year’s nationwide prison strike continues to emerge slowly. The National Lawyers Guild Prisoners’ Legal Advocacy Network (NLG-PLAN) has received additional details from 12 states, including:

In Halifax, Nova Scotia, testimony in a habeas corpus application has confirmed that 40 people held in a “close supervision unit” have been confined to their cells 23 hours a day, on one occasion for a continuous 36-hour period, for several weeks. This action comes after 10 members of prison staff refused to work in the unit and commenced during the non-violent strike previously reported.

The Times-Union in Jacksonville, Florida, reported that two letters from its journalists asking about the strike were rejected by officers at Okeechobee Correctional Institution on the grounds that they were a “threat to the security, order, or rehabilitative objectives of the correctional system, or the safety of any person.”

The extent of repression and retaliation by prison authorities against suspected participants in this year’s nationwide prison strike continues to emerge slowly.

Meanwhile, severe restrictions have been imposed on correspondence and reading materials in Pennsylvania and Ohio following claims that contact with synthetic cannabinoids left dozens of prison staff sick. This theory has been broadly rejected by medical professionals.

A past president of the American College of Medical Toxicology said: “In a word, it’s implausible … One thing we know about [synthetic cannabinoids] is that they don’t cause the effects these folks are having, and certainly not by the route that they’re being exposed … The symptoms are much more consistent with anxiety.” People in prison, their families and supporters fear that the changes, costing tens of millions of dollars, will effectively shut down groups like Books Through Bars in those states, as well as expose client-attorney communications to surveillance.

At Indiana State Prison, whistleblower Aaron McDonald is now under a one year non-contact visitation status in retaliation for exposing the inhumane conditions and rampant abuse going on inside. His mother, Leslie Hernandez, is facing bogus charges for her outside organizing and support for her son. IDOC Watch is monitoring the situation and preparing the next move to defend them both.

The crackdown against incarcerated activists in Youngstown, Ohio, has intensified. Imam Siddique Hasan, a prisoner leader on death row following the 1993 uprising in Lucasville Ohio, received a one year phone restriction and security level hike, while multiple supporters were permanently banned from visiting any Ohio prisons. Officials at the supermax where Hasan is held have also engaged in collective punishment by increasing visitation restrictions, especially targeting organizer Greg Curry.

Prosecutor Mark Peipmeier also filed a motion to set an execution date for Hasan’s friend, Keith LaMar, who was also falsely convicted following the uprising. This motion came shortly after the strike, but LaMar was not involved in strike organizing.

In nearby Toledo, Ohio, David Easley, James Ward and Matt Hinkston engaged in another hunger strike Sept. 14 to raise up the 10 prison strike demands, in protest to their own isolation after the Aug. 21 strike and to fight for proper mental health treatment for their fellow incarcerated comrades.

In order to most effectively capture the energy that has been generated during the National Prison Strike, Jailhouse Lawyers Speaks has established the Millions for Prisoners’ Human Rights Coalition. The coalition aims to include 400+ groups and organizations that endorsed the National Prison Strike as well as individuals who’ve signed on in solidarity with prisoners. The coalition is committed to the achievement of all of prisoners demands beyond the strike dates.

In order to most effectively capture the energy that has been generated during the National Prison Strike, Jailhouse Lawyers Speaks has established the Millions for Prisoners’ Human Rights Coalition.

The coalition will be led by incarcerated organizers who relay updates to coalition members on at least a bi-weekly basis. The strategy moving forward will include outside members supporting different forms of prisoner-led resistance.

At this time, JLS is focused on informing policymakers about the National Prison Strike and has requested that the coalition collect signatures and send letters to members of Congress on the state and federal levels. To date the online petition has collected well over 30,000 signatures and has sent thousands of letters demanding that prisoners’ human rights be met. Sign up for the coalition here: http://sawarimi.org/jls-prisoners-initiative.

While reporters and supporters are eager to know, no plans have been solidified and no dates have been released for a National Prison Strike next year. In the coming months JLS will be leading resistance by relaying actions through the Millions for Prisoners’ Human Rights Coalition. Supporters as well as reporters are encouraged to join the coalition in order to stay informed about JLS’s next steps.

In the coming months JLS will be leading resistance by relaying actions through the Millions for Prisoners’ Human Rights Coalition.

We look forward to seeing the outcomes of JLS strategy leading collective action from the inside in pursuit of each of the demands. As the months continue, actions progress and results materialize, JLS will be able to give more informed details about future events that best respond to the nation’s desperately volatile criminal justice climate.

Amani Sawari, the official outside media representative of Jailhouse Lawyers Speak, can be reached at prisonstrikemedia@gmail.com; Jared Ware, freelance journalist covering prisoner movements, at jaybeware@gmail.com and @jaybeware on Twitter; and the Incarcerated Workers Organizing Committee (IWOC) National Media Subcommittee, at media@incarceratedworkers.org and @IWW_IWOC on Twitter.