We were gathered in the courtyard of Midtown Garden Apartments in the Western Addition-Fillmore District of San Francisco, off Divisadero near Geary.

The long term tenants at Midtown had been successfully resisting city government plans to carry out mass evictions and tear down the predominantly African American folks’ homes. Midtown had been put up in the 1960s to make some amends after the government of San Francisco destroyed hundreds of homes in the Fillmore in the name of “redevelopment.”

I’d heard about the gathering on Bobbie ‘Spider’ Webb’s Tuesday morning show on KPOO, 89.5, Poor People’s Radio. His show featured soulful blues and rhythm and blues, including some numbers featuring “Yours Truly” on saxophone.

The June 30 event commemorated over three years of the Midtown Tenants Association fighting off displacement and asserting the peoples’ right to stay in their homes and assume ownership. Leading up to the event, not once but twice Bobbie Webb invited Midtown folks to come on his show to tell listeners, who sponsor the station, their story, and publicize the June 30 get together.

I’d heard about the gathering on Bobbie ‘Spider’ Webb’s Tuesday morning show on KPOO, 89.5, Poor People’s Radio. His show featured soulful blues and rhythm and blues, including some numbers featuring “Yours Truly” on saxophone.

Earlier, I had the honor of seeing Bobbie Webb perform on Fillmore Street, and he really brought the house down, joined on stage by another local musical legend, Fillmore Slim.

On that sunny afternoon at the end of June, another musical event was shaking Fillmore Street. Meanwhile, in the Midtown courtyard, food and fun ensued while speakers brought us up to date about the tenant association’s latest struggles and achievements.

After a while, musicians took the stage in the courtyard and their sounds filled the green space, lifting all our spirits. I was sitting near the front of the stage.

I noticed someone take a seat nearby. He had carried a black bag with him. As the music picked up the pace, the man with the black bag sat in a dignified state, applauding with the rest of us, but doing nothing else to bring attention to himself.

Then a musician shouted out, “And now we’d like to bring Bobbie ‘Spider’ Webb on stage.” A buzz went through the crowd.

Bobby Webb carefully removed his sax from the black bag and took the stage.

I expected him to break into a blues or R & B number, but instead he broke into the unforgettable opening notes of Horace Silver’s jazz classic, “Song for My Father.” It didn’t take long for us to realize we were in the presence of a master virtuoso, immediately demonstrating his versatility.

Then a musician shouted out, “And now we’d like to bring Bobbie ‘Spider’ Webb on stage.” A buzz went through the crowd.

In retrospect, Bobbie (Spider) Webb may have been playing his own epitaph on that Saturday at the end of June. Less than three months later, Bobbie Webb left the world stage he had graced so brilliantly. He died on Sept. 21.

That night an all-star show at Slim’s Club in SF celebrated its 30th anniversary, featuring another blues great, Elvin Bishop. Part of the show’s proceeds was donated to KPOO.

But the show also served as a sendoff for Bobbie “Spider” Webb, who gave us all so much and left a long lasting legacy.

Michael Steinberg, a musician, activist and writer based in San Francisco, can be reached at blackrainpress@hotmail.com or www.blackrainpress.org. 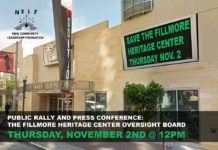