I’m sad to report that I was attacked and beaten by clansman as Black guards watched. I sent out a report on this but left out info I felt would cause the message to be banned, delayed or thrown away. This attack was in response to my November Bay View piece that circulated around the prison like wildfire.

Until I don’t have hands to write and eyes to see and a tongue to speak, I will continue to expose such attempts to repress my freedom of speech. As long as the oppressor recognizes it can use justified brutality to chill prisoners’ rights of exposing acts that shock the conscience and deter others from expressing them, they won’t stop.

Death is the only thing that will stop me; history has proven that Texas officials are more than up to the challenge. I’m here and I’m waiting. Make me stop. Shut me up. It took death to shut David Ruiz up, and that’s what it will take to silence me. I’m giving my life to the nation of the oppressed.

Until I don’t have hands to write and eyes to see and a tongue to speak, I will continue to expose such attempts to repress my freedom of speech.

Judgment day will come for the oppressor. Their wall of protection will come crumbling down like the Berlin Wall. The darkness this evil has hidden in for over one hundred years will one day shine bright for all the world to see.

On the morning of Nov. 23, 2018, around 3:15 a.m., I was grabbed by Officer Pollock, snatched out of the chowhall and beaten by him, Officer Williford and another white officer as Black guards stood by watching. Pollock’s plan was to slam me to the ground and they all punch and stomp me.

I wouldn’t allow him to slam me, so many other guards, including Black ones, began punching me in the face and body. I felt a radio hit me in the head and I fell to the ground. They stomped me in the ribs, head and body.

While I was pinned to the ground, I felt a sharp object poke me in one eye, then the other eye. Now both of my eyes are partially blind. I believe my retinas were scratched. I can see but part of my vision in both eyes have permanent blind spots. I’ll need glasses.

Judgment day will come for the oppressor. Their wall of protection will come crumbling down like the Berlin Wall. The darkness this evil has hidden in for over one hundred years will one day shine bright for all the world to see.

Pollock wrote me a bogus assault case, saying I hit him in the left eye. My only evidence is the kitchen camera that will show I was snatched out of the chowhall door. I never hit anyone, my fight was protecting myself from as many blows as possible.

They even tried to break one of my fingers. If I would have fought back, the first three wouldn’t have stood a chance. I now face trumped up criminal charges. My focus was giving them no legit reason to say I hit them.

I was denied medical care from when it happened until 9:30 a.m. I was told medical staff don’t come until after 6:00 a.m. In violation of policy, I was locked up without having a physical. I was forced to fill out the use of force statement while I was still dizzy and as Lt. Nesbit impatiently waited. I wasn’t able to explain everything because of limited spacing.

I need for someone to subpoena the kitchen surveillance camera from 2:50 a.m. till 3:30 a.m. and the portable camera that was used to escort me to a cell. You will see from the kitchen camera that Pollock got into it with another Black prisoner, stood by him mugging him and me while we ate, then followed the Black prisoner out of the chowhall.

I need for someone to subpoena the kitchen surveillance camera from 2:50 a.m. till 3:30 a.m. and the portable camera that was used to escort me to a cell.

I identified myself as a published writer who would report him. It sounded like he told another white guard that I was “the newspaper nigger.” Then he handed the officer loose items off his person, as if he was getting ready to tussle.

I felt something was wrong so I checked my watch for documenting. Then, when I was about to walk out the chowhall, Pollock elbowed me, then partially slammed the door on me. I asked why he hit me. That’s when I was grabbed.

Pollock and Williford are broadly known as racists and rumor suggests they are Klansmen for the Riverside KKK. Ever since the November Bayview has been circulating, white guards have been making sly remarks about it. Pollock tried to provoke me a time before, but I ignored him.

It’s ironic that the very form of justified assault I explained in the November issue, I’m now a subject of. What are the odds of that?

Don’t be surprised if I’m transferred again. When you get this, please check and see if I’m still here and still alive.

This is only the beginning. They didn’t seem satisfied that I survived with only a few scratches on the left side of my face. More will come.

My body, bones, ribs and back hurt real bad. I was only given a cheap form of Tylenol. I need legal help. I’ve sent motions to the court seeking an injunction for the continuous destruction of my legal mail, legal evidence etc.

As I go from one place to another, I’m having stuff stolen by staff. By the time my First Amendment/social media/retaliation suit is heard in court, I won’t have any supporting evidence left. 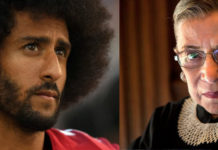 The jig is up!

‘Us Against Them’: an interview wit’ Karaam and Ness of the A-Alikes