During the National Prison Strike, Jailhouse Lawyers Speak (JLS) inspired incarcerated and outside activists across the country. Activists on the outside were inspired by prisoners’ leadership on the inside, their ability to work effectively through limited communication and under the threat of retaliation.

After the strike, incarcerated people were even more inspired by the activism that happened across the country on the inside. Prisoners from each corner of the country are realizing the power that they have to influence positive changes in their environments.

Prisoners who had not seen themselves as change makers are beginning to understand that they have the power to influence policy changes and reform the negative practices of those who prey on inmates and their families. While the end date of the National Prison Strike has passed, prison resistance continues as people who are incarcerated continue to fight to protect their human rights, and the numbers of those on the inside committed to supporting incarcerated activists continue to grow.

Expanding the network, extending the call

JLS members continue to encourage supporters to educate policymakers about prisoners’ demands through the petition, emailing, letter writing, social media and other forms of contact and now that selections have been made for representatives it is essential that we hold those elected responsible for any criminal justice reform policies that they’ve committed to during their campaigns.

While we continue to communicate with legislators it’s essential that we solidify communications between one another. One of the main reasons the National Prison Strike did not touch every single state is because of the lack of JLS members in many regions of the country.

Our goal is to have incarcerated activists in communication with JLS in every state so that the next call spreads further. JLS is now focused on expanding the membership base of their group behind the wall. The strike’s call did not reach every state this year so by enlisting new members, JLS will be able to expand their call into more states and more prisons across the nation.

There are a few guidelines for incarcerated folks seeking to become members of JLS. In order for an individual to register as a member, they will need to write the group at Jailhouse Lawyers Speak, P.O. Box 1076, Knightdale, NC 27545 (this is a secure post office box) with their interest in membership.

In order for a JLS member to form a committee they would need to write the group with their interest in membership along with three additional members who would serve in one of each of the following roles: chair, co-chair, secretary and treasurer. Members must include their position in the committee when writing JLS. On the letter, interested members should identify whether they’d like to be a traditional or general member.

In addition to new incarcerated activists joining, JLS is also seeking outside support for those interested in being a part of the Millions for Prisoners Human Rights Committee. This committee will be focused on organizing a Millions for Prisoners march, an event that will take place next year. It’s essential that we gather more outside supporters to form committees for each prisoner-led initiative.

Knowing that prison resistance is ongoing, I’ve been working with prisoners to connect their individual initiatives to organizations who can support them. Prisoner-led initiatives can be found at http://sawarimi.org/support; the newer ones from this past month are highlighted:

The initiatives listed above require the participation of both incarcerated folks and outside organizers. My hope moving forward is that those who do or who wish to support the National Prison Strike efforts remain connected in order to effectively support those prisoners who’ve risked their lives during the strikes. If you’re involved in an initiative that is not yet on my radar, please contact me via amanisawari@gmail.com so that we can be aware and support you, as well as others in your region. 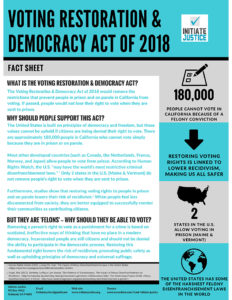 An example of this can be seen in Pennsylvania where women were restricted from participating in contact visitation due to their use of feminine hygiene products. In response, coalition members and outside supporters participated in an organized phone zap the day that the policy was initiated and were able to demolish that policy by the following day.

Now it is much less likely that this type of discriminatory policy related to the regulation of feminine hygiene products would be enacted. However, if we were to allow such a policy to slip under the rug, the potential for it to spread across state borders is dangerous. So it is essential that we all stay connected and support each other in the work that we are doing.

There are thousands of individuals now seeking to be involved in this movement to end mass incarceration and abolish slavery, especially with the most recent energy that was created by Kanye West and other celebrities highlighting the 13th Amendment’s slavery exception clause. While prison resistance is ongoing – it has been going on since prisons were first built and will continue until their abolition – the fact that new people are coming into the movement is an incredible sign of progress and growth.

While some may feel that the problem is overwhelming, what I try to stress to everyone is the fact that no single person can do everything, but everyone can do a single thing. It’s our responsibility to harness this increased energy and organize people.

In Clallam Bay Corrections Center in Washington state on Nov. 7, Superintendent Jeri Boe stated they will no longer be offering hot meals to IMU inmates. Learning from the situation that occurred in Washington State Penitentiary where inmates’ hot meals were taken away and then reinstated after a four-day hunger strike, inmates at Clallam Bay are on hunger strike. They were inspired by the Solid Black Fist newsletter and prisoners’ actions internationally during the National Strike. Officials have attempted to use elections season to try and establish inhumane policies, but we must let them know that we are always watching.

With election season, prisoners are often skewed out of focus but we must not forget their ongoing struggle. We hope by this time next year that the Right2Vote campaign will be in full swing in every state so that incarcerated members in our community can more directly be involved in the voting process.

For now, we as supporters in protecting prisoners’ human rights must remember to vote for the voiceless by keeping prisoners in mind. Prison Resistance is ongoing and will continue in all forms until all prisons are abolished.

Chanton Miles is an activist incarcerated in Michigan who participated in the National Prison Strike phone boycotts, which led in the state’s reduction of phone costs from 23 cents to 13 cents per minute. Michigan’s Department of Corrections also responded to strikers by eliminating the money transfer fee that immediately reduced the amount that prisoners receive in their accounts. It’s bold activism like a phone boycott that pushed GTL and MDOC to change their policies.

Chanton and I have published a calendar which highlights revolutionary characters from history, including a wide range of freedom fighters: political prisoners, outside activists, entertainers and others who have inspired and informed the work we are doing today.

These many figures are featured, along with important and relevant dates, including Juneteenth, Kwanzaa and the independence of African countries.

The funds for this calendar will be used to support the expansion of our social justice work.

For more information or to order a calendar, visit https://sawarimi.org/product/ourstory-calendar or cut out the order form and mail to this address: 14419 Greenwood Ave N., Seattle, WA 98133, Ste A #132.

Reformation of detention centers, jails and prisons isn’t the end goal, but the more that we reform the way that these institutions are currently functioning, the closer we get to abolishing them altogether and replacing them with safe spaces where people can receive the individualized care that they need in order to address the trauma and other negative influences that led to any behaviors that would have contributed to their incarceration. I know that I will see this in my lifetime and I’m excited to be a part of a community that also values and cherishes this goal.

Amani Sawari, now the editor of the Bay View, is also the spokesperson for Jailhouse Lawyers Speak and coordinated the 2018 National Prison Strike. She can be reached at amanisawari@gmail.com or @Sawarimi or by mail to 14419 Greenwood Ave. N., Ste A #132, Seattle WA 98133. Visit her website, http://sawarimi.org.