Nov. 17, 2018 – Assemblymember Tony Thurmond is the projected winner of the California State Superintendent of Public Instruction election. More than a week after Election Day, Thurmond has overcome an 86,000-vote deficit on Election Day to win the election. On Saturday, his opponent Marshall Tuck conceded.

Thurmond was born in Fort Ord, California, and overcame humble beginnings. His mother was an immigrant from Panama who came to San Jose, California, to become a teacher. Thurmond’s father was a Vietnam veteran who Tony met when he was almost 40 years old.

After Thurmond’s mother died when he was 6 years old, Thurmond moved to Philadelphia with his sibling and was raised by a cousin whom he had never met before. With the help of the public education system and public assistance, Thurmond went on to attend Temple University, where he became student body president.

Thurmond later served on his local City Council, School Board, and was elected to the California State Assembly in 2014. In the State Assembly, Thurmond authored legislation that expanded the free lunch program and moved funding directly from the criminal justice system to school districts. He served as chair of the Assembly Select Committee on Science, Technology, Engineering, and Math Education.

In his campaign for Superintendent of Public Instruction, Thurmond was supported by Sen. Kamala Harris, the California Democratic Party and California’s teachers.

“We talked to voters across the state, and told them what this election means for each of us: It means giving every kid the opportunity to succeed in the 21st century, not just the ones who show the most potential.

It means funding our public schools at the levels they deserve, not pouring money into our jails and prisons. It means providing mental health treatment for kids, not arming them with guns.

It means supporting our teachers, not demonizing them. It means ensuring every child starts school on the same foot, and providing universal preschool to California’s children. And it means stopping Donald Trump and Betsy DeVos’s anti-education agenda from coming anywhere near California’s public schools.”

Thurmond went on to promise, “As Superintendent of Public Instruction, I’ll fight for these values every day. Because these are the values that will create a better life for all through the power of public education in the great state of California.”

Maddie Franklin can be reached at madeline@tonythurmond.com. 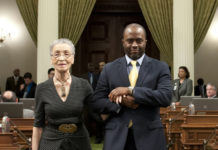