by the San Francisco League of Pissed Off Voters

This proposition is stunningly progressive and spectacularly needed. It’s a small tax on corporations that will dramatically improve the lives of homeless San Franciscans.

The City has approximately 7,500 homeless residents on any given day, half of those unsheltered. That’s according to the Point-In-Time Count, which homeless advocates say vastly underestimates the total unhoused population. Over 20,000 San Franciscans experience homelessness a year. There are only about 1,300 adult shelter beds – with a huge waiting list for 90-day beds.

Prop C will address this by raising $300 million annually. Half of that will build and acquire permanent housing, a quarter will go to mental health and substance abuse treatment, and the last fourth goes to homelessness prevention, temporary shelters and hygiene centers.

Prop C funds the Department of Homelessness and Supportive Housing’s ambitious goals outlined in their five year strategic framework. It would house 4,000 households, prioritizing families with children, youth and our most impaired homeless residents.

Prop C only applies to corporations earning more than $50 million a year, and it doesn’t touch that first $50 million. Above that, Prop C taxes them about half a penny per dollar, depending on the kind of business. Gross receipts are calculated by industry.

The tax doesn’t affect most businesses, and retail stores get the lowest rate, so don’t let anyone scare you with B.S. that Prop C will make corner stores flee the City. It takes this kind of bold legislation to move the dial on homelessness.

The opposition is spewing a lot of schlock about how much SF currently spends on homelessness. Let’s crunch the real numbers.

In the SF Chronicle, Jeff Kositsky, director of San Francisco’s Department of Homelessness and Supportive Housing, provided a breakdown of how the City spends its budget of $300 million:

“Last year, two-thirds went to people who aren’t homeless at all. That’s the amount spent on rental subsidies, eviction prevention and permanent supportive housing [services aimed at preventing people from becoming homeless or to house the formerly homeless] …

“Take away 11 percent for administrative costs and one-time capital spending, and you’re left with 17.6 percent spent on temporary shelters, 3.2 percent on street outreach and 2.2 percent on health services. That means about $57 million was spent on the visible homeless population, the group of people we see every day who so clearly need help.”

The tax doesn’t affect most businesses, and retail stores get the lowest rate, so don’t let anyone scare you with B.S. that Prop C will make corner stores flee the City. It takes this kind of bold legislation to move the dial on homelessness.

Over the course of a year, 20,000 people will be homeless in San Francisco, Kositsky said, adding that 5,000 of those won’t use city services because they figure out their own housing arrangements or are just passing through. “But divide $57 million by 15,000 homeless people who need city help each year, and you see the city spends $3,800 per person per year. Or $10.41 a day.”

In a Sept. 26 report from the Controller’s Office, Chief Economist Ted Egan dispelled myths about the legislation, noting there was little fiscal impact on the City’s job market and overall economy.

Joe Eskenazi of Mission Local gave an excellent analogy. “The report noted that Proposition C’s ‘impacts are small in the context of the city’s job market and economy, equal to a 0.1 percent difference, on average, over 20 years.’ …

“To give you an idea of how small a number 0.1 percent is, it’s one-quarter the percentage of real butter in Mrs. Butterworth’s syrup. To give you an idea of how many jobs Egan believes are going to be vanquished by Prop. C, if the city would have created 1,000 jobs in a Prop. C-free environment, the report predicts Prop. C will result in the creation of a mere 999.”

In a Sept. 26 report from the Controller’s Office, Chief Economist Ted Egan dispelled myths about the legislation, noting there was little fiscal impact on the City’s job market and overall economy.

The Examiner noted Egan’s further comments, “While the tax savings to San Francisco businesses are difficult to estimate and apportion to the city, it is likely that the 14 percent income tax cut would outweigh the proposed 0.5 percent gross receipts tax increase for the majority of the 300-400 affected businesses.”

Prop C has created an unlikely alliance of tech titans, celebrities, community activists and housing advocates all throwing down and dispelling the myths that the Chamber of Commerce, London Breed, Scott Wiener, David Chiu and Gavin Newsom are peddling.

This comes from the San Francisco League of Pissed Off Voters’ Nov. 6, 2018, Voters Guide. 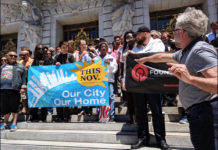 ‘You wash us away, but we’re still here’: Homeless funding initiative headed for November ballot