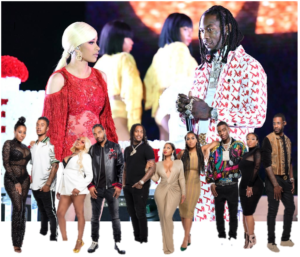 One of the most glorified celebrity couples in hip hop right now represents a symptom of a much larger issue in our community, especially in relation to promiscuity, commitment and self-control.

When Cardi B and Offset’s relationship began, it sprouted out of a bed of confusion. Their public engagement was quickly followed with a baby. As fans were anticipating a wedding, the couple surprisingly revealed that they had already been married. The short marriage has been tremulous thus far with infidelity sprinkled throughout. Now the couple are already separated.

Healthy relationships are an essential part of nation building. It’s impossible to build a healthy society on unhealthy relational practices. The immediate family structure is directly related to the larger societal structure.

It’s impossible to build a healthy society on unhealthy relational practices. The immediate family structure is directly related to the larger societal structure.

With 70 percent of Black children being raised in single parent households, instead of learning relational practices from watching our parents we are solely dependent on watching how relationships work on television and in the media where we are constantly fed the wrong ideas on how to treat one another. We need to be intentional about those marriages that we glorify and elevate in our community. It’s essential that we set an absolute standard for how a respectful and successful marriage should look. There are examples of healthy long lasting marriages, even in entertainment, that we can aspire to.

After Offset’s interruption of his wife’s live performance at the Rolling Loud festival in Los Angeles, she was not impressed. She refused to take him back while Offset continued to profess his love and regret publicly, saying on Twitter: “All of my wrongs have been made public. I figure it’s only right that my apologies are made public too.”

As Offset received a ton of pushback from fans, Cardi defended her baby’s father saying on social media that fans were not helping the situation by attacking him. Cardi and Offset continued to use social media to relay messages to one another, roping millions of followers into the third angle of their love triangle while somehow expecting them not to respond or react.

More comfortable as a slave to sex than a supportive spouse

As fans continued to press for answers, in Cardi’s most recent response to what she missed most about her husband, she told fans, “I miss the D.” She goes on to describe her husband’s penis to fans: “Big, black, heavy … I miss it a lot.” Offset, like many Black men, was reduced to his sexual stature and performance. Sadly, this was done publicly by his own wife.

A wife is usually comfortable valuing her husband in other ways publicly, but we collectively aren’t expected to fill or even know how to perform in a spouse role. In addition to having little to no experience witnessing healthy marriages first hand, we also have little to no examples of healthy Black marriages in the media (so many of those examples of Black Love were wiped out in the ‘90s).

As a result, we treat each other like the sex slaves that we were forced to be when we arrived to this country. Sex slaves aren’t expected to be intimate in any other way. We stunt our relational intimacy with one another when we refuse to nourish those many other aspects of relationship. For decades we were not allowed to nourish any other forms of intimacy and now it seems as though we’ve completely forgotten how to.

Intimacy is more than sexual

Learning intimacy without sex is essential to a long lasting, healthy relationship. These include emotional, intellectual, experiential, spiritual and other forms of physical intimacy. Emotional intimacy is what we may experience with a parent or close friend but we should also be able to share our innermost thoughts with our romantic partner. Intellectual intimacy can be found between peers or co-workers, giving us the comfort to exchange ideas about books, songs, poetry and other works that we care about.

We should also be able to have powerful intellectual exchanges with our romantic partners. Experiential intimacy is developed as couples share different experiences with one another. This can be developed while traveling, attending events or enjoying a wide range of adventures with your partner. Spiritual intimacy can be seen in couples who are comfortable sharing inspiring moments together. These couples are comfortable worshiping, praying or meditating with one another.

Learning intimacy without sex is essential to a long lasting, healthy relationship. These include emotional, intellectual, experiential, spiritual and other forms of physical intimacy.

Lastly, physical intimacy can be confusing for some, but it is much more than sexual. Affection can be shown through physical touch: holding hands, holding one another, sharing hugs, kisses, massage etc. Once a couple is able to master all of these forms of intimacy, that can only enhance any type of sexual encounter they may share.

All forms of intimacy must be nourished in order for a relationship to be healthy. Our spirit, mind and bodies seek to be engaged in a robust connection with the one we love. All of this should be done prior to engaging in intercourse in order to ensure that sex doesn’t stunt one’s ability to develop the other forms of intimacy.

The purpose for this article is not to attack Cardi or Offset. My hope is that their marriage will heal and operate healthily. Knowing that this can be difficult in the entertainment spotlight, I don’t blame them for being caught in the cycle of the chaos and turmoil that keeps entertainers relevant despite the negative effect that it has on their personal lives.

Both of these artists could be considered “trap” musicians, a genre that exalts conflict, intoxication, promiscuity, death and material wealth. A recent trailer for the newest season of Marriage Boot Camp – Hip Hop Edition features the tumultuous marriages of rappers Waka Flocka and his wife Tammy Rivera along with Lil Mo and her husband, professional boxer Karl Dargan. Both of these rappers work in the trap music genre and I noticed the direct connection between a career promoting disrespect in one’s music and the way that one negatively treats their spouse.

Music is a form of meditation. No one can just “act” out roles in the songs that fuel their lifestyle and not have it bleed into their relationships. We see this over and over again in a slew of celebrity relationships promoted on “reality” tell-a-vision. What vision are they trying to tell us?

Music is a form of meditation. No one can just “act” out roles in the songs that fuel their lifestyle and not have it bleed into their relationships.

The most popular ways that African Americans are portrayed worldwide are in rap music and entertainment. The entertainers who are representing us around the world are doing so in a very negative light, yet we fuel these dangerous promotions through buying and sharing their music.

These types of representations, whether we realize it or not, legitimize the constant police murders, mass incarceration and other genocidal tactics that we suffer in America. These representations play a huge role in not only the way we’re viewed worldwide, but also in the way we feel about ourselves.

Recently Speech, a former member of the rap group Arrested Development, released his first part to the series, “The Nigga Factory.” The video powerfully describes this shaping of our and the worldwide consciousness about Black people. America is a factory in the business of producing people to act out these untamed bitch, pimp, playa and other unfavorable roles. I’ve included Speech’s Part 1 of the series below where he describes what the Nigga factory is, and it is a must watch.