All is not well in the Jewish state and everyone who is paying attention knows it. Below are some pictures of Ethiopian Jews demonstrating against racism and struggling for equal rights in the Zionist Jewish state run by European Jews. They are colonial racists akin to Nazis. They are, along with Saudi Arabia, part and parcel of U.S. imperialism, a military outpost planted in the Middle East.

The Zionists brought Ethiopian Jews to Israel, not because they find kinship with them, but to be cannon fodder to kill Palestinians.

All is not well in the Jewish state and everyone who is paying attention knows it.

CNN fired Marc Lamont Hill, an African-American, who spoke up for the Palestinians at the U.N. Anyone who speaks ill of the Nazi Zionists is considered “anti-Semitic,” which is ironic because these Ethiopians are Semitic and the Ashkenazim are not. The Semitic peoples are the Arabs, including the Palestinians, East Africans and North Africans – this includes Christians and Muslims.

This discrepancy is allowed to exist because most people are ignorant of the facts of history, which serves the interests of the exploiters. Those who peddle this gross misunderstanding have “alternative facts.” Time to wake up, America! Time to wake up!

Marc Lamont Hill, a professor at Temple University and a fierce advocate for equality, was perhaps the strongest, most articulate and most passionate voice against racism and bigotry among CNN’s regular contributors. On Nov. 29, CNN fired him because he believes Palestinians, too, fit into a vision where all people deserve equal rights. For CNN, that was just too much.

Marc was targeted by what can only be described as an organized campaign to silence his principled and consistent advocacy against racism and for the equal treatment of all people, including Palestinians.

Wednesday, Nov. 28, as part of a Special Meeting of the Committee on the Exercise of the Inalienable Rights of the Palestinian People, in observance of the United Nations International Day of Solidarity With the Palestinian People at U.N. headquarters in New York, Marc was invited as a member of civil society to provide a statement to the forum. He did so, having just returned from the Palestinian territories, and he made clear that his experience as a Black American and the history of struggle against slavery and Jim Crow in the United States inform his solidarity with the Palestinian people.

Marc was targeted by what can only be described as an organized campaign to silence his principled and consistent advocacy against racism and for the equal treatment of all people, including Palestinians.

The demand that Palestinians have equal rights from the river to the sea is not radical or racist or bigoted.

This includes Israel and the West Bank and Gaza. Yet critics jumped on Marc’s use of the phrase “from the river to the sea” to portray him as some sort of radical eliminationist – someone who believes that Israel should be violently destroyed or that Jews should be forcibly expelled – when anyone who heard his statement or knows his advocacy can tell you he is anything but.

The demand that Palestinians have equal rights from the river to the sea is not radical or racist or bigoted.

You see, Palestinians deserve to have their full human rights wherever they live. Just as we should expect nothing less than equal rights for African-Americans or any group ― from sea to shining sea ― and not just in some tiny fraction of the United States, so too should Palestinians be afforded equal treatment under the law no matter in what part of the land between the river and the sea that they live.

People should be treated as equals before the law, regardless of their identity. This isn’t rocket science, and it really isn’t difficult to comprehend unless, perhaps, you support racist and discriminatory rule.

The reality, of course, is that it is Israel that rules from the river to the sea, having unified the territory under its control in 1967 and has since then, a half century later, still failed to afford equal rights to the Palestinians who live under its rule. In fact, it is Israel’s continued consolidation of this entire territory, through settlements and military occupation, that has made any possibility of a two-state solution, which was already unfair to Palestinians, impossible and has made positions like the one Hill outlined in his speech not only reasonable but also the only viable and humane solution.

People should be treated as equals before the law, regardless of their identity.

That is precisely why this vision of equality is threatening to those who are stalwart defenders of Israel’s apartheid policies. In fact, a poll found that if a two-state solution is unachievable – and that should be pretty obvious at this point to anyone paying attention – that equal rights for Israelis and Palestinians in a single-state, again from the river to the sea, was supported by 63 percent of Americans, including 74 percent of Democrats, 54 percent of independents and even 50 percent of Republicans.

Knowing well that Americans will turn against apartheid in the long run, defenders of Israel’s discriminatory policies have turned to silencing the critics they can’t best in the battle for American public opinion. Even more threatening is when people who come from various oppressed communities, who have struggled for and continue to struggle for their rights, understand the Palestinian struggle not as a nationalist one but as a rights-based struggle for equality against a fundamentally discriminatory regime.

CNN has unfortunately made it clear which side of this question it stands on. While it fired Hill for the offense of believing Palestinians should be treated equally, it continues to employ and feature serial liar Rick Santorum, who has denied that Palestinians even exist and claimed same-sex marriage was akin to terrorism.

So the message is clear and undeniable. All the despicable, offensive things that Santorum says are not fireable offenses. They have even put up with Jeffrey Lord’s horribly offensive, racist and routinely incoherent blathering for years. It took him literally tweeting a Nazi salute for CNN to decide he was unfit for its air.

While CNN fired Hill for the offense of believing Palestinians should be treated equally, it continues to employ and feature serial liar Rick Santorum, who has denied that Palestinians even exist and claimed same-sex marriage was akin to terrorism.

But Marc Lamont Hill calls for treating Palestinians as equal human beings with equal human and civil rights, and he is out the door in 24 hours.

This is CNN, and it should be ashamed.

Ray Marshall can be reached at rayrouge@sbcglobal.net. Yousef Munayyer is the executive director of the U.S. Campaign for Palestinian Rights. Contact him on Twitter: @YousefMunayyer. Sign the petition, “Tell CNN: Reinstate Marc Lamont Hill. Advocating for Palestinian Rights is not Antisemitic.” 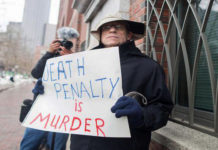 Newsflash: Alabama has been torturing poor people for a long time