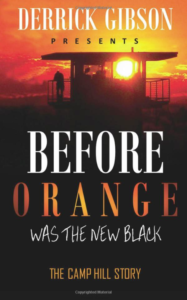 I’m a published writer, author of “Before Orange was the New Black: The Camp Hill Story.” What I’ve written could be the motivation for the excessive brutality aimed at me lately. Here’s the synopsis of my book on Amazon:

“In 1989 there was a prison riot in central Pennsylvania so devastating that it caused millions of dollars in damages to the prison complex. It was humiliating and embarrassing to its prison officials. This affected the entire Pennsylvania Department of Corrections and Federal Bureau of Prisons for years afterward. The corrections officials went out of their way to keep this incident out of the mainstream. Even most people in the same county prison system have not heard about the riot that took place in 1989. To this day, it’s forbidden to talk about the riot inside Pennsylvania prisons. This is the true story and testimony of Derrick Gibson’s experience of the social tension and his historical account as an eyewitness to events and incidents that took place. ‘Before Orange was the New Black: The Camp Hill Story’ will pique your interest, captivate, humor and even anger you as you read along.”

In October of 2017, I was offered a sweetheart deal by the Pennsylvania Department of Correction at SCI Forest Retreat. It was understood that I would be placed in the Behavior Modification Unit program here at SCI Retreat in Hunlock Creek at the completion of a six month period. Once the program was completed, I would be placed back into the general population for the duration of my sentence with the possibility of early parole.

Since then I have endured the worst, most cruel, inhumane conditions on the highest level, from beatings to excessive force and misuse of authority. I have been unsuccessful with the completion of my program due to sabotage using mental tactics – provoking and harassment. I filed complaints on several occasions. My complaints have not been taken into consideration.

Since then I have endured the worst, most cruel, inhumane conditions on the highest level, from beatings to excessive force and misuse of authority.

I’ve been handcuffed unnecessarily and sprayed with mace on several occasions. All communication has been periodically cut off for weeks at a time. My family members have been denied visits. My entitled privileges have been taken away, my belongings ransacked, destroyed and distributed among other inmates.

I’ve been subjected to meager accommodations unsuitable for the weather conditions with just a T-shirt and underwear. I’ve been placed under isolation in solitary confinement in handcuffs. I am in constant turmoil caused by those who abuse their authority by inflicting pain and anguish on those of us who are trying to serve the remainder of their sentences with some level of dignity. I’m speaking out on such conditions not only for myself but also for inmates who have endured similar or worse conditions that may not have a voice or support.

My main intent is to bring these issues to the forefront of my community through the press to the masses. Our concerted efforts can make changes and better the conditions for my comrades as well as myself.

I’m speaking out on such conditions not only for myself but also for inmates who have endured similar or worse conditions that may not have a voice or support.

For those who may not be aware, I want to take the opportunity to expose the injustice and inhumane treatment that goes on behind prison walls. I am asking for a team of supporters to flood the phone lines with calls asking for Deputy Officer Laura Banta or Counselor Grohowski 570-735-8754. Address letters to the acting warden at SCI Retreat, 660 State Route 11, Hunlock Creek PA18621.

Request an end to any further harassment and that I be allowed to resume my entitled privileges so as to complete the Behavior Modification Unit program and move into general population as once agreed upon. I’m reaching out to the public my community and leaders in humility in an effort to better my condition and serve my time in the most cordial manner as possible. All support will be greatly appreciated.