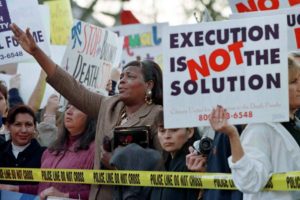 When, in October 2016, I wrote, “Death row inmates in Alabama are human guinea pigs” because the state’s capital punishment regime – specifically its barbaric, often bungled lethal injection protocol – is already so dark, so depraved, so outrageously cloaked in lies and officious secrecy, I never could have predicted the situation could get worse. But it has.

In glaring contrast to the heavily circulated, smiling picture of exonerated former Alabama death row inmate Anthony Ray Hinton, ebullient after voting for the first time in a midterm election since being freed in 2015, after a hellacious 30 years on Alabama’s death row, it’s important to understand: The death penalty in Alabama has gotten far worse since Mr. Hinton’s release – not better.

The death penalty in Alabama has gotten far worse since Mr. Hinton’s release – not better.

First, because of the cynically named “Fair Justice Act,” convoluted legislation hacksawing fundamental constitutional rights of (overwhelmingly indigent) death-sentenced defendants, signed into law last year – over the varied, vociferous, published objections of the ACLU, a highly respected Harvard Law School professor, defense attorneys in the state, myself and even Mr. Hinton – it is far easier under current Alabama law, for an innocent person like Mr. Hinton, to be convicted and sentenced to death.

Because of the cynically named “Fair Justice Act,” it is far easier under current Alabama law, for an innocent person like Mr. Hinton, to be convicted and sentenced to death.

Second, despite a fairly recent slew of patently botched lethal injections, including that of Ronald Bert Smith, Torrey McNabb and Christopher Brooks – as well as the bloody, horrific and failed execution attempt of Doyle Hamm, during which, among other atrocities, state executioners repeatedly (and futilely) jabbed multiple needles into Hamm’s groin and pelvis – Alabama has coldly, inhumanely, and, as I wrote elsewhere in June, steadfastly continued “its odious tradition of ducking and dodging transparency and accountability in how the state puts its prisoners to death.”

I’d presaged this discomfiting conclusion several months earlier, in October 2017, in a piece for USA Today, after McNabb’s shameful, gruesome torture; in it, I dubbed the commissioner of Alabama’s Department of Corrections (ADOC) “‘Baghdad Bob’ of Alabama’s death row.”

Pouring accelerant on this already demoralizing and distasteful dumpster fire, a just-released report by the Death Penalty Information Center (DPIC), “Behind the Curtain: Secrecy and the Death Penalty in the United States,” observes: “Alabama has one of the most restrictive secrecy policies in the nation, consistently maintaining that all documents associated with an execution are confidential.” (While he wasn’t focusing on the modern death penalty, in reviewing W. Fitzhugh Brundage’s new book “Civilizing Torture: An American Tradition” for the L.A. Times, author Colin Dickey recently and insightfully wrote: “The work of American torture has always been twofold: not just the violence itself, but the complex legal and rhetorical strategies that obfuscate it away to maintain a myth of America as a civilized place without cruel and unusual punishment.”)

And now, as if this wasn’t all ghastly enough – this undeniable fact Alabama has been torturing poor people for a long time, and that it shows no sign of stopping – the Montgomery Advertiser’s Bryan Lyman wrote on Nov. 23 that the state is planning to augment the barbarism involved in its executions to even greater and more unseemly dimensions; Lyman reports that plans are now underway for Alabama to develop a protocol to execute death row prisoners with nitrogen gas.

But, Lyman notes, because “[n]itrogen asphyxiation has never been used in capital punishment before,” Alabama “finds itself inventing a method of execution.” Soberly and pointedly, Lyman observes: “The American Medical Association authorizes the use of the method in animal euthanasia, though only for birds and small animals.” Relatedly, in March, Robert Dunham, executive director of DPIC, tweeted: “The World Society for the Protection of Animals lists nitrogen inhalation as ‘not acceptable’ for animal euthanasia because loss of consciousness is not instantaneous, and dogs euthanized by nitrogen gas have been observed convulsing and yelping after ‘falling unconscious.’”

Lyman reports that plans are now underway for Alabama to develop a protocol to execute death row prisoners with nitrogen gas.

Also in March, following Alabama’s vengeful killing of an 83-year-old man, I urged that during such dreary, desolate days for death penalty abolitionists, unusually sage insight, and perhaps also the solace of understanding, can be gleaned from the words of writer James Baldwin. The same is true today as more and more developments emerge about the prospective state-sanctioned killing of human beings with nitrogen gas in Alabama – and even more depressingly, in other states like Oklahoma and Mississippi (which have approved the procedure), too.

In his essay “What Price Freedom,” Baldwin postulated: “I still believe when a country has lost all human feeling, you can do anything to anybody and justify it, and we do know in this country we have done just that.” Borrowing from Baldwin further, and speaking directly to Alabama’s Attorney General’s Office and the ADOC, Baldwin concluded, in yet another one of his piercing essays, “The Uses of the Blues,” that “[i]n evading [death row prisoners’s] humanity, you have done something to your own humanity.”

But last time when I wrote how James Baldwin’s writing helps us to understand the continued dastardly use of the death penalty, I also wrote about Dr. Martin Luther King Jr. and I let Baldwin get the last word; this time, it’s with the power of Dr. King that I’ll close. Because it was Dr. King who, from his humble pulpit on Dexter Avenue in Montgomery, Alabama, began a nonviolent movement in this country – a movement for justice, for equality, for humanity, a movement for the betterment of all mankind – a movement that continues to this day.

In his book “Why We Can’t Wait,” Dr. King wrote these hallowed words, words that all Alabamians, and indeed all Americans, still have not fully internalized, accepted and allowed to become part of our baseline morality: “Man was born into barbarism when killing his fellow man was a normal condition of existence. He became endowed with a conscience. And he has now reached a day when violence toward another human being must become as abhorrent as eating another’s flesh.”

With the prolonged picking and poking of condemned prisoners with needles, the “choice” of electrocution and now, perhaps, also nitrogen gassing, we’re not there yet. Not even close.

Stephen Cooper is a former D.C. public defender who worked as an assistant federal public defender in Alabama between 2012 and 2015. He has contributed to numerous magazines and newspapers in the United States and overseas. He writes full-time and lives in Woodland Hills, California. He can be reached at stevecooper7214@gmail.com. This story first appeared in CounterPunch.