On Dec. 10, 2018, dozens of people, mostly high school and college students, held a protest at the busy intersection of San Antonio Road and El Camino Avenue in Mountain View, California, to condemn the corruption, brutality and killings by the U.S.-backed regime of Jovenel Moise in Haiti. Protesters made and carried enlarged posters of unarmed Haitian students who have been killed by the Haitian police. The demands of the protest were straightforward: 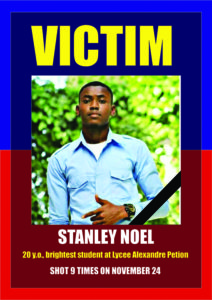 The protest started at approximately 4 p.m and turned into a candlelight vigil after night fell. 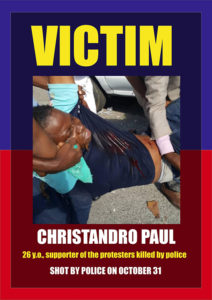 The LAHS Students for Haiti Solidarity opened the protest, with a speaker highlighting the U.S. government’s connection to the repression in Haiti. “American tax dollars are being used to install and maintain this dictatorship in Haiti that is murdering students and people when they are demanding basic human rights …. We, the Students of Haiti Solidarity of the Los Altos High School Chapter, want to demand that our representatives in Congress stop supporting this regime and its police.”

Two veterans from the 1960s Civil Rights Movement in the U.S. who had been active in the Student Non-Violent Coordinating Committee (SNCC) traveled several hours to participate in the protest as well. They made the connection between the struggle of Haitian students today for basic human rights, including the right for their votes to count, and the struggle of Black youth in the South during the 1960s for the same human rights.

Recently, there have been massive protests across Haiti against the fraudulent elections that swept the regime into power, its looting of public funds – the “Petro Caribe scandal” – and the severe deterioration of basic services such as education. Many public school teachers have not received any pay for over two years. 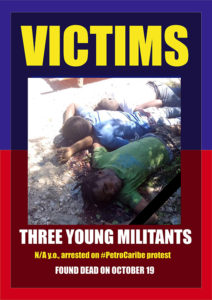 In retaliation against the protests, the regime’s police and death squad elements have been killing unarmed protesters, targeting Haitian students, leaving bodies on the streets with full impunity. Police even attacked a funeral for slain activists, forcing people to flee the building with coffins in hand.

According to Pierre Labossiere, dedicated Haitian activist in Oakland and co-founder of the Haiti Action Committee, “[Students] are being shot at and killed by the Haitian police. This is a terrible thing that’s going on. Those people have the right to ask those questions, they have the right to receive answers and not bullets – and not death.”

The regime was installed in 2016 by U.S.-financed “elections” – what people in Haiti call “selections.” Despite the clear and overwhelming evidence of fraud with these “elections,” the U.S. government – along with U.N. occupation forces in Haiti – have continued to provide vital support to the regime, including training of its police.

“It seems like the issue is so far away, but it’s not,” said Haiti Solidarity Club President Negar Bagheri, Los Altos High senior. The students vowed to continue with their protests and expand the solidarity with the Haitian students in particular and the Haitian people in general. As the protesters chanted: “Solidarite pou Lavi!”

For more information on what you can do, go to https://haitisolidarity.net/2018/11/hold-the-u-s-u-n-occupation-accountable/.

Seth Donnelly teaches social studies at Los Altos High School, where he is the founding advisor of Haiti Club. He can be reached at seth.donnelly@mvla.net.