Today, in Haiti, the violent rule of Jovenel Moise has come to a violent end. Moise himself had recently said he had “about a million enemies,” and that was undoubtedly true. In his effort to maintain power and exercise full dictatorial control, he not only sparked a powerful grassroots uprising but angered other factions within Haiti’s elite.

It may take quite a while to fully decipher the internecine battles within ruling circles that led to his demise. In the midst of all the confusion and sensationalism surrounding what happened – Colombian hit squads, a Haitian American doctor and politician arrested as a conspirator, the supposed ignorance of the U.S. Embassy as armored SUVs rolled up on Moise’s house, DEA informants and other U.S. assets involved in the plot, the arrest of Moise’s head of palace security – we need to analyze the fundamental issues at stake in Haiti right now.

As we do this, it is important to identify and reject the racist tropes that have always dominated mainstream media discussion of Haiti and are once again in play. From the time of its revolution against the brutal French slave system and its historic victory against that system, Haiti has been derided and demonized.

In the wake of Moise’s assassination, we have been subjected to the usual racial code words: “dysfunction,” “chaos,” “gang warfare,” “failed state.” All of this hides the guiding hand of the United States and other imperial powers in creating the conditions that have brought about this disastrous period for Haitians. And it studiously ignores the steadfast fight for democracy, education, health care and dignity embodied by Haiti’s unshakeable popular movement.

The “better idea” is for Haitians to determine their own destiny, free from the corrupt and dictatorial regimes imposed upon them by foreign forces.

An op-ed in The Washington Post stated, without a trace of irony: “There’s a hidden story here – one that is rarely discussed – when countries such as Haiti (my emphasis) … so often end up with toxic, destructive leaders.” An editorial in the same newspaper called for a stepped-up United Nations occupation, asking “There are good reasons to worry about sending U.N. troops to Haiti. But does anyone have a better idea?” ignoring the fact that the current 17-year UN occupation brought a deadly cholera epidemic, rampant sexual exploitation and violent repression of the popular movement.

The “better idea,” of course, is for Haitians to determine their own destiny, free from the corrupt and dictatorial regimes imposed upon them by foreign forces.

Today’s crisis in Haiti has its roots in the 2004 U.S.-orchestrated coup against the democratically elected government of Jean-Bertrand Aristide and his Fanmi Lavalas Political Organization. Lavalas means “flash flood” in Creole, signifying the gathering together of people’s power.

The Lavalas movement emerged in the struggle to rid Haiti of the U.S.-backed Duvalier dictatorships in the 1980s and brought Aristide into office in 1991 and then again in 2001. Under Lavalas administrations, more schools were built than in Haiti’s entire history, funding was dramatically increased for public health and literacy projects, the minimum wage was doubled, and the brutal Haitian Armed Forces was abolished. This was all laid waste when the U.S. organized a coup d’etat against Aristide and then orchestrated a UN occupation to derail this process of progress and change.

The usual racial code words, “dysfunction,” “chaos,” “gang warfare,” “failed state,” hide the guiding hand of the United States and other imperial powers in creating the conditions that have brought about this disastrous period for Haitians.

Instead of the steps towards inclusion, economic and social reform under Aristide, which he characterized as moving “from misery to poverty with dignity,” for the last 17 years Haitians have had to deal with yet another foreign occupation, this time by the United Nations, and a series of reactionary regimes that have looted the state treasury, increased food insecurity and poverty, and organized terror campaigns against the opposition. The unraveling that Haiti is experiencing today flows directly from this assault on Haiti’s nascent democracy, and on its sovereignty.

Moise was a U.S.-backed tyrant, ruling by decree, handpicked by his mentor and predecessor, Michel Martelly of the right-wing PHTK party, whose own election in 2010 had been orchestrated by then-U.S. Secretary of State Hillary Clinton. In 2015, Moise’s sham election as president was denounced as an “electoral coup d’etat” by the grassroots movement in Haiti.

Hundreds of thousands of Haitians took to the streets every day for over two months, forcing the election results to be annulled. The follow-up election was just as illegitimate – filled with fraud, voter suppression and intimidation. Yet the US, UN and the OAS immediately sanctioned its legitimacy, setting the stage for Moise’s Duvalier-like dictatorship.

From the day he was selected, Moise’s regime was a testament to corruption and terror. Implicated in a money laundering scheme during Martelly’s presidency, Moise was accused of having taken in $5 million for his role in the scheme. After he assumed office, he simply removed the head of the agency that had done the investigation. Throughout Haiti, Moise was known as the “indicted one.”

Soon after, the Petrocaribe scandal exploded. Venezuela had provided Haiti with oil for years at well below the market rate. With the profits from the oil sales, the Haitian government was supposed to fund schools, hospitals and other social programs. Instead, under both Martelly and Moise, the money disappeared, pocketed by government officials, to the tune of over $3 billion. “Where is the Petrocaribe money?” was the slogan as a full-scale uprising demanded Moise’s resignation.

As mass protests grew and his government teetered, Moise turned to full-scale terror, weaponizing criminal elements and turning them into death squads backed by sectors of his police force (financed and trained by the United States) and using them to attack opposition neighborhoods. The most horrific example was in Lasalin in November 2018, where hundreds were killed, women were gang raped, and people’s homes were burned to the ground, forcing a mass exodus out of the community.

Operating with impunity, paramilitary forces tied to Moise’s government, including the so-called G-9 led by ex-police officer Jimmy “Barbecue” Cherizier, unleashed a wave of violence throughout the poorest communities of Port-au-Prince, making life in the country unlivable. Tens of thousands of Haitians have had to flee their homes, becoming internal refugees, in order to escape the death squads. Kidnappings have soared in Port-au-Prince, where even market vendors with little or no resources have been abducted.

The Biden Administration’s rush to a new set of phony elections is designed to keep elite and foreign control of Haiti.

This was the regime that the U.S. and the UN occupation supported with unwavering political backing and millions of dollars in aid. In the wake of the assassination, we are seeing more of the same, with hardly any disguise.

For example, on July 18, the US and its colonial Core Group – a consortium composed of the U.S, France, Germany, Canada, Brazil, the OAS, the UN, Spain and the European Union – announced their support for Ariel Henry, who Moise had designated as prime minister two days before his death. Within a day, the interim prime minister, Claude Joseph, resigned.

The Core Group then urged Henry to form a new government, which undoubtedly will follow in the footsteps of the Moise and Martelly regimes. These moves, and others that are sure to come, are designed to perpetuate elite control of Haiti with new faces at the top and to marginalize the role of the mass popular movement.

We should be clear in this regard on the positions taken over the last months by the Biden administration. When a new wave of large-scale protests erupted in Haiti this past February, demanding that Moise leave office, particularly since his term had officially expired on Feb. 7, the Biden State Department and the OAS announced its support for him to stay one more year and to organize a new set of elections in September. Their backing is what allowed Moise to retain power.

This system has run its course. It cannot be patched up. It must be changed.

The Biden Administration continues to insist that new presidential and parliamentary elections should be held in September, under the aegis of the current Haitian government. This rush to a new set of phony elections is designed to keep elite and foreign control of Haiti.

It has been opposed by the popular movement, which is demanding instead a transitional government of public safety (Sali Piblik), constructed by broad sectors of Haitian society, which could then establish a basis for free and fair elections.

“It is imperative that we respect the people’s aspirations for progress and for a just society. It is paramount that we stand in solidarity with the people’s protests demanding a new form of state. The nation deserves a new system that is more in harmony with the dreams of our founders, a new vision of the republic rooted in justice, transparency and participation … No cosmetic solution will bring an effective and lasting solution to the crisis in which we are plunged. This system has run its course. It cannot be patched up. It must be changed.”

As we build solidarity with Haiti over this next period, as we oppose continued foreign intervention, and as we challenge the U.S. government’s ongoing sabotage of Haitian democracy, we should keep those words in mind.

We need to demand the following:

1. Cut off all US aid for the Haitian police once and for all.

2. Stop the Biden administration’s support for the PHTK regime regardless of what new figurehead becomes president.

3. End US support for sham elections in Haiti.

4. Support the right of the Haitian people to form, through their own popular movement, their own transition government free from US interference. No more US-UN military intervention in Haiti.

Robert Roth is an educator and a co-founder of the Haiti Action Committee. For more information, please visit www.haitisolidarity.net. 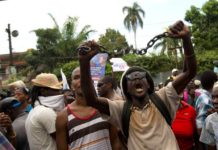