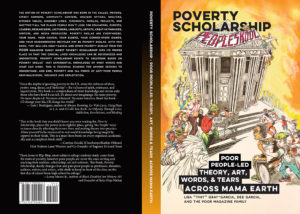 Poor, homeless and disabled scholars are releasing a book sharing their truly innovative solutions to homelessness and poverty and launch a national theatre production on poverty, homelessness and criminalization of poor people.

“Us poor and homeless people in the U.S. are in a state of emergency – between the demolitions of thousands of units of public housing, the extreme rise in gentrification and evictions of low-income and working class elders and families and the concurrent rise in the criminalization of unhoused encampments and our bodies. That is why it is so urgent for people to listen to our own innovative solutions to poverty and homelessness – solutions like Poverty Scholarship and the Homefulness Project,” said Lisa Gray-Garcia, formerly homeless single parent, author of “Poverty Scholarship: Poor People-led Theory, Art, Words and Tears Across Mama Earth” and “Criminal of Poverty: Growing Up Homeless in America.”

This book and curriculum release will be accompanied by a series of theatre and poetry workshops in community centers, schools and jails with other homeless and formerly homeless communities to help share the extremely innovative poor people-led solution to homelessness known as Homefulness and create a national theatre production called “Poverty Skolaz” while also teaching, sharing and offering workshops in academic institutions and organizations on the equally innovative funding strategies outlined in “Poverty Scholarship,” seeking to learn how to form, create, support and serve in a different relationship with communities in the deepening crisis of poverty and homelessness across the U.S. and beyond. Please contact poormag@gmail.com to inquire about bookings or schedule a reading or performance.

With this book, Tiny aka Lisa Gray-Garcia and other poverty skolaz from the grassroots, poor and indigenous people-led movement and very grassroots non-profit organization, POOR Magazine, insert “Poverty Scholarship” into its proper place so that this crucial lived knowledge can be recognized and understood. The book points to solutions based on poverty skolaz’ vast experiential knowledge of what works and what can work. This is essential reading for anyone seeking to understand – and end – poverty and all forms of anti-poor people criminalization, violence and exploitation.

With this powerful book, Tiny and other poverty skolaz at POOR Magazine hope to change the discourse on poverty and homelessness, land use, service provision, education, advocacy and philanthropy for communities in poverty and has included original art and words from known and unknown poverty, disability, indigenous skolaz, poets and teachers such as Leroy Moore, Al and Tony Robles, Corrina Gould, Joey Villareal and many more.

POOR press is the poor people-led publishing arm of POOR Magazine dedicated to publishing the books and art of very low or no income, homeless and incarcerated youth, adults and elders.

“From the depths of growing poverty in the U.S. arises the richness of ideas, poetry, song, dance and ‘skolaship’ – the richness of spirit, resistance and regeneration. This book is a compendium of street knowledge and stories only those who have lived it can tell. It’s about new imaginings: No more poverty. No more displaced. No more colonized. No more voiceless. Read this book – it’ll change your life; it’ll change the world.” – Luis J. Rodriguez, author of “Always Running, La Vida Loca, Gang Days in L.A.” and “It Calls You Back: An Odyssey Through Love, Addiction, Revolutions, and Healing”

“This is the book that you didn’t know you were waiting for. ‘Poverty Scholarship’ places the power in its rightful place, giving ‘the People’ voice to issues directly affecting their own lives and putting theory into practice. Allow yourself to be immersed in real world knowledge being taught by experts in their fields. This is a must have book on every organizer, academic, ally and accomplice’s book shelf.” – Corrina Gould (Chochenyo-Karkin Ohlone), First Nations Land Warrior and Co-Founder of Sogorea Te Land Trust

“From Jesus to Hip-Hop, most subjects college students study come from the roots of poverty; however, poor people are never the ones writing and teaching their realities, scholarship, art and activism. This book, ‘Poverty Scholarship,’ finally changes that and puts poor people as professors, theorists, authors, writers and artists with chalk in hand in front of the class on the first day of school from high school to college.” – Leroy Moore Jr., author of “Black Disabled Art History 101” and founder of Krip-Hop Nation

Learn more about “Poverty Scholarship” and share what you’ve learned on Facebook, at https://www.facebook.com/PovertyScholarshipBook/, on Twitter, at https://twitter.com/PoScholarship, and on Instagram, at https://www.instagram.com/povertyscholarshipbook/. Read more about issues of poverty and race written by the people who face them daily at POOR Magazine/POOR News Network, www.poormagazine.org.

May 2 marks the 10-year anniversary of the passing of poet Al Robles. Al Robles was conferred much respect as a Poverty Scholar of POOR Magazine and remains an ancestor board member of the POOR Magazine family. Robles’ life was centered on the notion, the struggle to “take back our lives” – our histories, languages, art, land – all of the things whose legacies live in our skin, our blood – all of which have been stolen or commodified or co-opted.

One of POOR Magazine’s mottos is “Nothing about us without us.” Robles dedicated his life to telling the stories of Filipino-American elders who were forcibly evicted from San Francisco’s Manilatown neighborhood. This removal was fueled by real estate speculation, the same force that evicts elders and families today – such as Iris Canada, a 100-year-old Black elder in the Fillmore – locked out of her home while at a senior meal program.

Therein lies the situation – voices, experiences, histories and herstories, lived experience – locked out, becoming – through foundation grants, endowments, scholarships etc. – a project or case study for an academic or some other with degrees and privilege to write about, take pictures of, document etc. Al Robles himself was steeped in academia for a time. The poet-historian attended USF (University of San Francisco), a Jesuit university, and was introduced to the philosophies of Thomas Merton, among others.

However, the neighborhood that produced him, the city’s Fillmore, was close and the sounds of jazz, the struggles of the Black and Brown and Yellow people of the neighborhood – the mixture of sounds from tongues stained with soy sauce, hot sauce, vinegar, pickled pig’s feet – would not allow him to forget or fall to what POOR Magazine calls the cult of separation or independence. He couldn’t forget the voices, the sounds of the workers, the voices from the fields where the seeds of Manilatowns across the U.S. were planted long ago.

Those voices, those elders – their “mata” catching him, never letting go, sharing their stories, their lives with him – a poet – over a plate of rice and fish. What more was there? So influenced was Robles by the Poverty Scholarship of these elders, of the Brown and Black people whose daily lives and struggles moved in his blood that he dedicated his life to poetry and to helping take back the life and lives of his community. He wrote of his evolution to Poverty Scholar:

I travelled far back into the past

All the things I’ve learned

I threw out of my mind

All the books I’ve read

Were not worth one roll

And on the value of the knowledge of people in the barrios and in the ghettos where he spent so much of his life observing the poetry, the sadness, the tragedy and the triumph of life – observing those people whose experiences were not given credence or were vastly devalued:

Who is to say

The weeds are not

Who is to say

The roots are not

The work of Al Robles and other poverty scholars of POOR Magazine (Al Robles was a board member of POOR until his passing in 2009) are featured in POOR Press’ newest book, a beautiful collection of essays and poems and manifestos called “Poverty Scholarship: Poor People Led Theory, Art, Words and Tears Across Mama Earth.” This book is an extremely important text for schools, political groups, healers, community workers – all who are working to take back lives and create a better world – to embrace. It is a declaration, a new plan:

The accreditation and linguistic domination

Of who is an expert

Who is a scholar

This book delves into practical ways in which poor-people led education can inform how media is created, how service is provided, the liberation of landless and poor people from poverty pimps and the multilayered world of social work that is a vortex that feeds off people whose lands have been stolen, languages erased and whose presence is maligned, ostracized and criminalized.

The art and poverty scholarship that sings out from the pages of this people’s text brings about the emergence of hope and healing. One of Al Robles’ favorite songs was the jazz standard, “Tenderly.” This book speaks with the fire of our indigenous blood and history, and tenderly shows us that there is another way. Tenderly in a society that gives grudgingly.

This book is a declaration of emergency and a guide book to regaining our bodies, spirits, hearts and minds. It is desperately needed at this time when, more than ever, we need to, as Poverty Scholar Al Robles said, “Take back our lives.”

Tony Robles is a housing rights advocate, poet and author of two children’s books and of “Cool Don’t Live Here No More: A Letter to San Francisco,” published in 2015, which former San Francisco poet laureate Jack Hirschman calls “the generational memory of San Francisco.” Tony can be reached at tonyrobles1964@hotmail.com.