San Francisco – Hundreds of young San Franciscans and their supporters rallied on the steps of City Hall Tuesday as a majority of the Board of Supervisors prepared to introduce legislation at the board meeting to require the closure of San Francisco’s Juvenile Hall by December 2021. Supervisors Shamann Walton, Hillary Ronen and Matt Haney authored the legislation, and Supervisors Gordon Mar, Aaron Peskin and Sandra Lee Fewer have signed on as co-sponsors.

“’We’re going to shut down Juvenile Hall, close youth prisons and build leaders together,’ Supervisor Shamann Walton, who spent time in juvenile hall as a youth, said to cheers from the crowd,” according to the Huffington Post. “’There is no way in hell we could put a system in place that is worse than Juvenile Hall,’ Walton said at the rally, calling instead for efforts like mentorship and quality after-school programs to give young people ‘opportunities rather than teach them how to be institutionalized.’”

The ordinance mandates that the Board of Supervisors close Juvenile Hall at 375 Woodside by December 2021 and in its place develop an expanded array of alternatives to incarceration for young people who do not need to be legally detained. The ordinance will also create a small rehabilitative non-institutional center in San Francisco for the small minority of young people who must be in a secure facility due to state law. A 12-person implementation working group will convene for the next two and a half years to attain these goals.

“This legislation is about dismantling the youth prison model and creating in its place a reform strategy that is designed to meet the needs of each youth while supporting them in their own communities,” said Supervisor Walton. “Incarceration is harmful and completely ineffective. I believe that any form of youth jail is detrimental to youth development and furthers trauma.

“I know from firsthand experience that all you learn in the hall is how to prepare to survive in prison. Youth need mentoring, services and support – not time alone in a cell,” said Walton.

This legislation comes on the heels of a San Francisco Chronicle investigative report by Jill Tucker and Joaquin Palomino on plummeting youth crime statewide. In San Francisco, violent felony juvenile arrest rates have declined by over 87 percent since 1990. The Chronicle report also documented the shockingly high amount of money that jurisdictions are spending on near-empty juvenile halls across California, including in San Francisco.

“San Francisco spends over $13 million a year – more than $270,000 per child – to lock kids up in a Juvenile Hall that is 75 percent empty and that research shows is highly ineffective at rehabilitating youth. This is a stunning misuse of funds,” said Supervisor Hillary Ronen. “This legislation creates a mandate that the City re-direct those funds into interventions and a small rehabilitative center that actually work.”

One study from the Arkansas Division of Youth Services identified detention itself as the single most significant factor in predicting whether a youth will offend again – more so than family difficulties or gang membership. Another recent study from Brown University and MIT found that incarcerating young people increased the likelihood that they would go to jail as an adult by 23 percent.

“Separating children from their families and holding them in jail-like environments in jumpsuits and handcuffs is outdated, morally reprehensible and ineffective,” said Supervisor Matt Haney. “San Francisco should instead commit to innovative, community-based solutions for our court-involved children and discontinue our reliance on a near-empty, outrageously expensive jail for kids,” Haney emphasized.

This legislation and campaign to close Juvenile Hall is also the culmination of nearly two decades of organizing by impacted community members, who have consistently demanded that the City fund and implement alternatives to a Juvenile Hall.

“We envision a San Francisco where safety does not mean putting youth in cages, and where communities are trusted to have the solutions,” said Jessica Nowlan, executive director of Young Women’s Freedom Center. “Youth and families have been calling for reform for years and can’t afford to wait. San Francisco can lead the state and the nation in modeling a new approach to youth justice and development – one that invests in children and communities so they can thrive.”

Joceyln Mati, a youth who spent time at San Francisco’s Juvenile who is now involved with the Young Women’s Freedom Center shared her thoughts, “San Francisco has so many services and groups for youth. We should not have to go to Juvenile Hall to access them.

“As someone who has been in the hall and now helps other young people in the system, I am grateful that six San Francisco Supervisors are working to shut it down.”

Holding up signs that read “No child belongs in jail,” “Books not bars,” “Free us kids” and “No youth jail,” “dozens of youth and their supporters said they were hopeful that stakeholders would see the legislation as an opportunity for change,” reports the San Francisco Examiner, quoting a number of young people who spoke at the rally.

“’You can’t have healing without being in your community. If you take kids away from that support system and expose them to the negative influences that you find within those (criminal justice) systems, you are just putting them in criminal school,’ said 18-year-old Hayden Beaulieu, who was incarcerated for nearly two years and called the juvenile justice system a ‘bureaucratic mess.’

“’They don’t listen to you; you’re an animal. And if something happens to you, you can’t ask for help,’ said Beaulieu, now an advocate for reform with the East Oakland-based group Communities United for Restorative Youth Justice. ‘You have two codes to live by: the code of your peers and the code of the system. If you obey one, you are breaking the other.’

“Breon, a 19-yar-old Oakland native who is also an advocate with CURYJ, said that he was ‘incarcerated for years’ and feels that the system ‘is a set-up.’

“’If you are under 18 and have no family support when you get out, they put you into a foster home or group home, in situations you can’t control,’ he said.

“Breon said that he would like to see alternatives to detention programs in which youth ‘can work off our time.’

“’Doing time behind bars, what are you really learning? People get out and do the same thing, especially if they have no family support, no connection,’ he said. ‘Those opposing this (legislation) just see all kids as the same, which is not true. We do stuff for a reason – not everybody has their mom or dad, or lives in a house. They should take that into consideration.’”

Another speaker at Tuesday’s rally was youth activist Fernando Madrigal, who, according to ABC7, “spent time at San Francisco Juvenile Hall for robbery when he was 13.

“For too long, we have been placing our young people in large, institutional detention facilities that run counter to everything we have come to know about positive youth development and trauma. I believe that the days of big juvenile halls should be behind us and I am eager to start this important conversation,” said District Attorney George Gascón.

“There are also stark racial disparities in the population of young people who are detained,” according to HuffPost: “In San Francisco, while about 5 percent of children in the city are Black, about 60 percent of the Juvenile Hall population in January was Black.

“’By ignoring the harms of incarceration, the city is ignoring the damage that it is doing to its young people of color,’ Meredith Desautels, staff attorney at Youth Law Center, a San Francisco-based youth justice advocacy group, told HuffPost by email.”

“Mayor London Breed has yet to take a decisive stance on the issue, calling instead for a blue ribbon panel to first conduct a comprehensive study of reforms to the juvenile justice system, a spokesperson confirmed Tuesday,” the Examiner reported. “The panel is expected to begin meeting next week.”

“It seems like people feel that this is the right approach, and we’re going to have a lot of people and organizations who are standing with us on this,” said Supervisor Haney, according to the San Francisco Chronicle, adding there are concerns about what to do with youths who need a secure setting. “There are a lot of questions. But I haven’t heard a lot of outright opposition.”

1. Mandate that the Board of Supervisors close Juvenile Hall at 375 Woodside by December 2021 and instead develop a) an expanded array of alternatives to incarceration and b) a small, rehabilitative non-institutional center for the small minority of young people who cannot safely be released into the community and who must be detained as per state law.

2. Create a 12 person implementation working group made up of key city agencies, juvenile justice experts, community representatives and labor that will meet regularly for two and a half years to meet the December 2021 deadline. Specifically this group shall:

Fact sheet: Why Juvenile Hall should be closed

One recent longitudinal study of 35,000 young offenders found that those who were incarcerated as juveniles were twice as likely to go on to be locked up as adults as those who committed similar offenses and came from similar backgrounds but were given an alternative sanction or simply not arrested.

Detaining children at Juvenile Hall is a huge waste of City funds. The budget for Juvenile Hall does not reflect today’s low numbers of incarcerated youth. In fiscal year 2017-2018 the City budgeted $13,322,254 for Juvenile Hall despite the significantly reduced number of incarcerated youth. The average annual cost per year for each youth detained has risen 127 percent in the last 10 years, from $123,400 in 2009 to $279,500 in January 2019, even though the number of youth detained has plummeted. 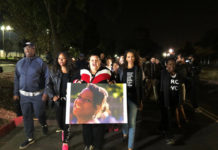 Lives lost to the institution: No candlelight vigil for Jessica St. Louis

My husband, my hero: The story of a prisoner labeled ‘worst of the worst’