There have been two murders within the Texas Department of Criminal Justice (TDCJ) recently. Unlike the normal narrative surrounding murders in prison, these deaths were not the result of gang violence – in fact, these prisoners were not even murdered by another prisoner. Rather, the perpetrators of these hideous crimes were TDCJ prison guards.

In both cases, the crimes were a result of a rogue prison guard acting out a deed of pure retaliation. But a TDCJ spokesperson has attempted to convince the general public that “retaliation” is not a widespread phenomenon.

According to the details released by TDCJ, one of the murdered prisoners had gotten into a dispute with his killer, resulting in the guard being spat on. Later, while escorting that prisoner to the showers, the guard took revenge and slammed the prisoner headfirst into the concrete floor. The prisoner fell unconscious and was airlifted to a nearby hospital, where he died two days later.

Shortly after, a TDCJ spokesperson released a statement stating that this retaliatory act was “isolated.” Ironically, the second murder would follow only a few weeks after in the John Middleton Unit.

The only thing “isolated” about these vitriolic events is the details making it beyond TDCJ’s compounds and into the hands of the mainstream media.

To state it plainly: TDCJ rules prisoners via the very real and constant threat of retaliation. Just a brief discussion with any current or former TDCJ prisoner would detail countless stories of revenge perpetuated by TDCJ officials on a daily basis.

Take, for example, what transpires if a TDCJ prisoner observes a prison guard violating policy, then requests a TDCJ Offender Grievance Form. If the prison guard becomes aware of the prisoner’s intention to file this complaint, this would almost certainly result in that prisoner being written a bogus disciplinary case, or would result in their cell being destroyed.

In some cases, if the prisoner is able to magically escape this form of retaliation and successfully files the grievance, the threat is still not removed. The officer that was filed against would empower another officer to harass that prisoner unjustly – there have even been cases where the grievance department itself would write a prisoner a bogus disciplinary case for “lying on a guard.”

If that is not enough, simply speak to a loved one of someone incarcerated within TDCJ. In the instances that a family member has to make a complaint to the TDCJ Ombudsman Office – TDCJ’s medium for outside complaints – the incarcerated loved ones would most certainly be summoned to the warden’s office and threatened with all sorts of retaliation. There have actually been situations where a loved one was removed from a prisoner’s visitation list for filing these complaints.

As a writer who has been incarcerated within TDCJ for over two decades, I’ve been routinely summoned to the warden’s office and threatened with various retaliatory measures for the content of my writings. My cell has been subjected to arbitrary searches; my property has been confiscated and destroyed. I’ve been written bogus disciplinary cases.

And, just recently, despite the fact that my family visits me every week and has visited for countless years, TDCJ officials moved me to a prison that is 14 hours away from them. Out of the 109 TDCJ prisons, there are 99 located between my current prison of assignment and where my family lives. This transfer came on the heels of grievances filed by myself and by my family members.

Being arbitrarily transferred 14 hours away from your family or being subjected to a bogus disciplinary infraction is nothing like being murdered. However, the connection has to be made in all of these retaliatory acts.

It is unreasonable to think that a TDCJ guard would just perpetrate a retaliatory act that would result in death without some sort of comfort that the prison agency itself is supportive. Even in the face of a prison guard facing criminal prosecution – as was the case with the two recent murders – a second prison guard was still empowered enough to think he would get away with his own rogue act of revenge. This is how prodigiously retaliation exists within the fabric of TDCJ.

Don’t believe the hype. Retaliation in TDCJ is not the exception – it is the rule.

Jeremy Busby is a former staff writer for the TDCJ prison newspaper The BOD. He is a contributing writer for The Marshall Project and can be reached by mail at: Jeremy Busby, 881193, Bill Clements Unit, 9501 Spur 591, Amarillo, TX 79107.

Russian pride and US exceptionalism 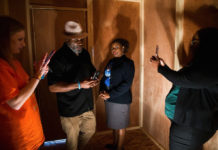