As if white people didn’t have enough privileges – for instance, never having to justify that you belong, like getting lost in an upscale neighborhood and not having the cops called on you and never experiencing being profiled by the cops for driving a certain kind of a car they think is out of your price range. Whites rarely experience knowing how it feels to walk into court knowing the cards are stacked against you, unless the Lord walks in there with you and you get a deal that only Jesus could have pulled off.

The current college admissions scandal has blown the minds of many Americans. For others, it confirms the pervasiveness of institutionalized racism. Yes. White supremacy not only lives; it thrives. This uncovering of the active hand of white supremacy is not even the tip of the iceberg.

White skin alone avails you to privileges that non-whites do not receive; but when wealth is added to white skin, you’re dealing with unlimited empowerment of white supremacy. Wealth like that of actress Felicity Huffman and Lori Loughlin more than tipped the balance in their favor – it toppled it.

CEO Rick Singer of a college prep company was paid millions to guarantee that his rich clients’ kids would get into such prestigious colleges as Yale and USC using bribery, cheating and fake athletic abilities or disabilities. Nothing appeared to be unethical if it produced the desired results. As for those among us who believe that African Americans are always crying wolf when crying racism? Oops, the boogieman got exposed.

Whites who were opposed to Affirmative Action because they said it gave unfair advantage to Blacks, and other minorities said we were being placed in these colleges and jobs because of our race and not our merits, despite the country’s long standing history of racial discrimination. Blacks fought hard for civil rights. Actually, to be blatantly honest – white supremacy is the white man’s affirmative action.

Community activist Karen Mims can be reached at kmims048@gmail.com. 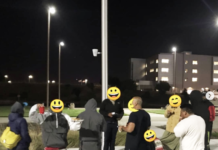 Activism in the age of prisoner resistance: College students and activists are changing the prison reform paradigm