by Mel Washington, Baycopy Plus in Bayview Plaza

In 2018, Walgreens notified the Karren Group, property owners of Bayview Plaza, 3801 Third St. at Evans, that they will not be renewing their lease. And on Jan. 19, 2019, SG Realty, the property management company for the property owners, listed the Walgreens location, consisting of 9,500 sq. ft., as being available for lease after Sept. 1, 2019.

Around July 1, 2019, Walgreens officially notified the public that they will be closing this store on July 22, 2019.

After this announcement, a rumor began to spread that a cannabis dispensary will occupy the vacated Walgreens space and that the ownership of this dispensary is a secret. At no time did the property owners or SG Realty communicate the closing of Walgreens or the prospective new tenant to any of the other business owners or tenants of Bayview Plaza, the handsome shopping center at Third and Evans that welcomes everyone entering Bayview Hunters Point.

Upon inquiry to the San Francisco Cannabis Office, it was revealed that on May 31, 2019, at 8:28 p.m., an application for a permit to operate a cannabis retail store at 3801 Third St. was submitted and the applicant was Have A Heart Cannabis Care headquartered in Seattle, Washington, and led by President and CEO Ryan Kunkel, who is also president and CEO of Interurban Capital Group, Inc., the corporate arm of Have A Heart Cannabis Care, which is registered in California as HAH 3 LLC and HAH 3 CA LLC.

Our concern is that there has been NO COMMUNICATION whatsoever from the property owners, SG Realty, Have A Heart Cannabis Care, Interurban Capital Group., Inc, the Cannabis Office, District 10 Supervisor’s Office or the Mayor’s Office about this application, which will have an impact on the businesses in the Bayview Plaza and the Bayview community at large.

Currently, there are local businesses that are applying for this type of operation in our community and throughout the city. Why would such a large operation be allowed to open a 9,500 sq. ft. location in a community that is trying to improve its services to attract services that the community needs?

Neither Interurban Capital Group, Inc., nor Have A Heart Cannabis Care is the right fit for Bayview Plaza. Not only are they headquartered in Seattle but they have operations in Washington, Oregon, Hawaii, Iowa and California, where they have stores at two locations in Oakland and more in Seaside, Coalinga and Blythe.

Help us convince this company that this is not the best place for this store.

There are local businesses applying for this type of operation in our community and throughout the city. Why would such a large operation be allowed?

Please express your concerns to:

Mel Washington, proprietor for almost three decades of the popular BayCopy Plus, one of the early tenants in Bayview Plaza, located next door to Walgreens, is the former president of the Bayview Merchants Association.

A brief history of Bayview Plaza, ‘showcase for Black businesses’

by Dr. Willie and Mary Ratcliff

In September of 1966, SFPD shot Matthew “Peanut” Johnson, 16, in the back for joyriding, and Bayview Hunters Point exploded. National Guard tanks and troops filled Third Street as their helicopters circled overhead.

Assemblyman Willie Brown predicted that, like the 1965 Watts Riot, the rebellion would bring the improvements in jobs, housing and education that the community had long demanded. Employment at the Hunters Point Naval Shipyard that had brought Blacks from the South to Hunters Point had declined and federal job development funds had been cut earlier in 1966.

Meanwhile, the San Francisco Redevelopment Agency, then in the midst of bulldozing Blacks out of the Fillmore, known worldwide as “Harlem of the West,” had enough respect for BVHP, thanks to a fierce cadre of women leaders and the advocacy of James Baldwin in “Take This Hammer,” that it had begun work on transforming Butchertown, the large area between Third and Evans and the Shipyard, from smelly meat packing houses into India Basin Industrial Park to provide the jobs that were the community’s primary demand.

As the large lots in the industrial park quickly filled with light industrial businesses, a signature component of the redevelopment plan was a shopping center at the corner of Third and Evans, which was finally completed in 1988 – the entire industrial park officially dedicated to good jobs and economic development for the people of Bayview Hunters Point. Covenants in every India Basin deed commit the owners to hire at least half of their workforce from BVHP in perpetuity – forever – and, in contracting and purchasing, to give preference to Black businesses.

Bayview Plaza was the name given to the center, and the big sign on the corner has been welcoming everyone to the neighborhood for more than 30 years. Ever since 1966, the people of Bayview Hunters Point had been promised that Bayview Plaza would be a showcase for Black businesses, and Redevelopment’s failure to find suitable Black businesses was its excuse for the more than 20-year delay in building the shopping center.

Willie Ratcliff, who in 1987 had just moved his family and his construction business, Liberty Builders, to San Francisco, met Rhody McCoy, famous for a segment of “Eyes on the Prize” about McCoy’s leadership of a teachers’ strike in New York City. McCoy had persuaded the San Francisco Redevelopment Agency to make him a part owner of Bayview Plaza, and he vigorously advocated for its completion and for fulfillment of its promise as a showcase for Black businesses, encouraging Ratcliff to work with him.

In March of 1990, Ratcliff had in his hand the Bayview Plaza lease, a City loan, the architect’s plans, the building permit, purchase orders for all the furnishings and equipment – all signed, sealed and delivered – to open his 160-seat Ratcliff Family Restaurant & Buffet. The Redevelopment Agency was proudly announcing the restaurant – a Black business – as the anchor business for Bayview Plaza.

Ratcliff planned to do the build-out himself with his construction company, Liberty Builders. His son, Lafone Ratcliff, who had been running successful buffet restaurants for years – all the healthful, delicious food you can eat for one low price – and training youth from the hood to staff them, was ready to be the manager.

Community hopes were high. Advocate Cheryl Towns told the Independent newspaper: “When this development (Bayview Plaza) was built, we were told it wasn’t just to serve the needs of the shoppers, but also to help with the economic development of the black community.” Suddenly the plan fell apart, and Ratcliff later learned from Greg Lewis, then the Examiner’s only Black reporter, that the then mayor, a “liberal,” had told him: “A Black man had the audacity to try to start a big restaurant in San Francisco in the ‘90s. Well, I put a stop to that!”

So, instead of a Black business as promised for decades, Bayview Plaza was initially anchored by Union Bank and Walgreens, and over the years more chains, including Starbucks and Wells Fargo, have filled most of the retail space. Not only is this a betrayal of the promise of a showcase for Black businesses, but it betrays a fundamental San Francisco value, the strong preference for small, locally owned businesses over chain stores.

At Bayview Plaza, the shining example of the community’s original intent is Black-owned Baycopy, a business the community has used for decades as its “office,” offering copying, scanning and computer services and the friendly expertise of Mel Washington, the former longtime president of the Bayview Merchants Association.

Please make the calls and send the emails to the list Mel provides above. Don’t hesitate to mention the founding promise of Bayview Plaza as a showcase for Black businesses.

The proposed 9,500 sq. ft. cannabis dispensary is not Black owned. It is not even locally owned. It would be one of a nationwide network of chain stores.

San Francisco can do better.

Dr. Willie and Mary Ratcliff, publisher and editor of the Bay View, can be reached at editor@sfbayview.com or 415-671-0789. 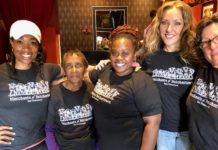 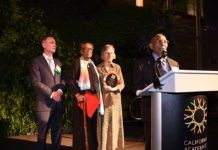 ‘We don’t work, nobody works’

‘Cannabis: Legalize It or Not’