On Oct. 10 – World Day Against the Death Penalty – opponents around the globe gathered to call attention to the conditions of men and women living under death sentences and to call for the abolition of capital punishment. I am both an abolitionist and a man living on death row in California’s San Quentin State Prison.

The death penalty is the state-sanctioned killing of people who have been convicted of killing people. If killing people is a crime, how is it different for the state to kill people? The whole world should be opposed to this. In fact, most of the world’s countries – 106 – ban capital punishment, as do 20 U.S. states and the District of Columbia. The United States belongs in the company of China, Iran, Saudi Arabia, Vietnam and Iraq in executing people.

Contemplating the death penalty brings me back to four months ago, when, on June 19 – known as Juneteenth by African Americans – there was a hearing in Congress attended by many influential people. They included journalist-activist Ta-Nehisi Coates, actor-activist Danny Glover, Democratic presidential candidate and New Jersey Sen. Cory Booker. Each person spoke on whether reparations should be given to the descendants of slaves.

There was powerful talk about what many people describe as America’s original sin and all the negative things that have been done and are still being done to the descendants of slaves because of the institutional racism that remains embedded in every part of our modern-day society.

To understand what reparations are, I looked the word up in my poor man’s dictionary. Here is what I found:

Some people say that reparations from one people to another are given to try to make the damaged people whole, as an act of acknowledgement of the wrong done to them.

No matter what the definitions of reparations are, in my opinion there should be no talk of reparations in the United States unless it includes the ending of the historic and horrific crime against humanity: the death penalty.

The death penalty in all its heinous forms was used not only to force people to submit to being slaves but also to keep them enslaved, from the shores of Africa to the shores of the United States.

From 1619, when the first African slaves set foot on this land, the death penalty and torture that preceded it kept an entire population of African and African American people in fear and enslaved. Even white abolitionists who tried to end slavery were tortured and executed.

This took place from 1619 to 1865, and from 1865 to 1965, the freed slaves and their descendants went from chattel slavery to slavery by another name – by way of the prison leasing system. That system, just like the system it replaced, relied on the death penalty and torture to force Black people to work and live against their will in inhumane conditions. For many, that was a fate worse than death.

In the tortured history of this country, the death penalty has reigned supreme over the lives of the descendants of slaves. For decades, studies have shown that often, all-white or mostly white juries have disproportionately imposed the death sentence on Blacks.

When Jim Crow segregation was used to keep Black people in the separate and unequal world, the death penalty was right there as a reminder of what would happen to them if they got out of line, or out of their place, or became too “uppity.”

It is neither right nor fair to talk about reparations and not include ending the main tool that has been implemented to terrorize a people forced to live, work and raise a family while contributing to a country hellbent on denying them their humanity. The system that exists gives lip service to the historical suffering, torture and cold-blooded murder of the people who have had the death penalty imposed on their Black bodies.

Reparations is more than about money, restitution or compensation, especially given that life is priceless. No amount of money can justly be paid to people who have been humiliated and terrorized in life and in death in the name of the law, god, manifest destiny, white supremacy or anything else.

It won’t cost a dime to end what has to be one of the worst crimes against humanity – the death penalty. In fact, it would save money that could go toward life, rather than toward death.

Kevin Cooper is a death row inmate at California’s San Quentin Prison. In 1985, he was convicted of a 1983 quadruple murder and sentenced to death in a trial in which evidence that might have exonerated him was withheld from the defense. Since his arrest, Cooper has become active in writing from prison to assert his innocence, protest racism in the American criminal justice system, and oppose the death penalty. His case was scrutinized in a June 17, 2017, New York Times column by Nicholas Kristof. Visit savekevincooper.org for more information. And write to him; send our brother some love and light: Kevin Cooper, C-65304, 4-EB-82, San Quentin State Prison, San Quentin CA 94974. This story originally appeared on Truthdig and is republished with permission. 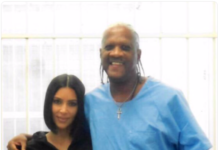