Sylidio Dusabumuremyi, a member of the Rwandan opposition party United Democratic Forces of Rwanda (FDU), was murdered on Sept. 23, the day before Rwandan President Paul Kagame addressed the UN General Assembly at its annual gathering. During the same week, 500 African migrants were shipped from Libya to Rwanda, thanks to an agreement between the European Union (EU), the African Union (AU) and the United Nations High Commissioner for Refugees (UNHCR). I spoke to Victoire Ingabire, who leads the FDU, about both developments.

Ann Garrison: Can you tell us what you know about the murder of Sylidio Dusabumuremyi, the national coordinator of your party?

Victoire Ingabire: Sylidio Dusabumuremyi was the manager of a canteen at Shogwe Health Center in rural Rwanda. He was at work when two people came on a motorbike and stabbed him to death. Patients looked on helplessly.

This is the latest in more than two decades of attacks on opponents of this government both inside and outside Rwanda.

AG: I believe you have said that you do not expect Rwandan authorities to seriously investigate. Is that right?

VI: The Rwandan Investigation Bureau has files on the murder and kidnapping of three more members of our party in the past year that still have not been resolved. They just keep telling us that we have to wait.

AG: Rwanda is a sovereign nation, no matter how tyrannical it may be. Is there any other judicial body outside the country that you have standing to appeal to? Such as the African Court of Human and Peoples’ Rights? I know that Rwanda withdrew from the court shortly before it ruled in your favor, although that wasn’t enough to escape its jurisdiction because your case was already underway there.

VI: This is no longer a matter for any courts. It is time for the democratic countries that support the Rwandan government to stop praising President Kagame, stop claiming that there is an economic miracle in Rwanda and stop refusing to look at human rights abuse in Rwanda. Democratic countries like the USA and the UK keep giving money to this government, even though it refuses to open up political space and keeps assassinating members of the opposition.

AG: African migrants have just been shipped to Rwanda from Libya, where they were trying to escape to Europe, and more are scheduled to be shipped there soon. The European Union, the African Union and the United Nations High Commissioner for Refugees agreed to this so as to stem mass migration to Europe, even though the fate of migrants shipped from Israel to Rwanda has been well-documented.

Last year Haaretz published two investigative reports with the help of the Fund for Investigative Journalism and The Hotline for Refugees and Migrants, an NGO. Haaretz published the first, “Asylum Seekers Who Left Israel for Rwanda Describe a Hopeless Journey,” in May 2015 and the second, “Theft, Extortion and Death: The Agonizing Stories of Refugees Israel Deported to Africa,” in November 2017.

Now, despite all that, the EU, AU and UNHCR are giving Kagame another big clap on the back, as though he’s Papa Africa sheltering the continent’s most unfortunate. Would you like to comment on this? How do you think these migrants might fare in Rwanda?

VI: Giving refuge to migrants from Libya is a good action of solidarity among African peoples. But how long will Rwanda respect its promise to protect these migrants? People have to remember that Rwandan police killed 12 Congolese refugees in the camp in Kiziba, in western Rwanda, just last year – in February 2018 – when they protested conditions in the camp.

AG: You told me the last time we talked that you will not live in fear of assassination or imprisonment? Shall we assume that’s still true, despite this latest murder of a member of your party?

VI: Of course. I know that the killers want me and other members of the opposition to be afraid and stop our democratic struggle. But Rwandan people need to be free in our country. Fear of being arrested again or being assassinated will never stop our struggle. 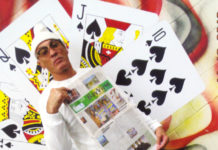