The epidemic of trans murder and transmisogynoir is not new. Globally, Black and Brown transwomen are most at risk and, in the USA, Black transwomen have been so predominately those murdered annually that in 2015 #translivesmatter was taken up as the cause of #blacklivesmatter and LGBTQ organizations took up #blacklivesmatter in solidarity.

Tired of watching Black transfolks being ignored in San Francisco, Socorrito Moreland and other organizers of the Oakland Transmarch put Black transwomen front and center, asking other Black transfolk to come and support them. The Black transmen surrounded the ladies, protective in formation, and all Black folks including non-binary people were asked to join as a part of the protest action.

“In San Francisco, we would ask Black transpeople to come to the front to join us to show strength in numbers and solidarity, but they were afraid to leave their white and non-Black POC partners to do it,” said Socorrito Moreland, one of the organizers

Many of the Black trans, queer and leather district community voices in San Francisco have been silenced by homelessness or moved to the East Bay. San Francisco has experienced a mass reduction of its Black population. Currently, only 5.3 percent of the population is Black, and many predict the 2020 census will cut that figure in half.

Black San Franciscans are 7.75 times as likely to be arrested as white people. African Americans now represent 37 percent of the homeless population in San Francisco; 47 percent of trangender and nonbinary Black people have been homeless.

Taking place the day before Oakland Pride, Oakland’s First Annual Transmarch highlighted the plight of Black transwomen in the United States and internationally as marchers chanted “Black TransLives Matter,” “Who’s Being Killed? Black TransWomen” and “Say Her Name” during the two mile march from Oscar Grant Plaza to the Pergola at Lake Merritt. Hundreds of Oakland transpeople and allies gathered at Oscar Grant Plaza at 11:30 a.m. on Saturday. Sept. 7, carrying signs and banners and waving blue, pink and white transgender flags.

“Oakland is home to hundreds of transgender people specifically of color; however, the city is overshadowed by San Francisco and its popularity around LGBT community-based events. This year Oakland will host its own trans march to create visibility and bring the community together in an attempt to have our own transgender movement and celebration,” announced the organizers of the Oakland Transmarch.

Black transwomen are one of the most at-risk groups in the United States. Twenty-six trans people have been killed so far in 2019, the vast majority of whom were Black transwomen. Dana Martin, Jazzaline Ware, Ashanti Carmon, Claire Legato, Muhlaysia Booker, Michelle “Tamika” Washington, Paris Cameron, Chynal Lindsey, Chanel Scurlock, Zoe Spears, Brooklyn Lindsey, Denali Berries Stuckey, Kiki Fantroy, Pebbles LaDime “Dime” Doe, Tracy Single, Bailey Reeves, Layleen Polanco and Bee Love Slater are the names of the Black transwomen who died this year and were chanted during the #BlackTransLivesMatter action during the parade.

A special call out was given to the plight of Black transwomen in US prisons and to Layleen Polanco, who died suspiciously in police custody. She was found unresponsive in her cell at the Riker’s Island jail complex in April.

The political tone of the march honored the Stonewall riots and the local Compton Cafeteria Riots which took place in the Tenderloin. Black transwomen started Gay Pride and it is fitting to place trans lives and experiences front and center at Pride.

Upon arrival at Lake Merritt, marchers were greeted by a series of a dozen or so booths, run by local nonprofits. They offered medical, legal and self-care services, including food and water for the marchers, tea and a place to write a love letter to oneself which would be sent at a later date along with a photo of the participant at this historic march. Transgender Gender-variant and Intersex Justice Project (TGIJP was one of the groups at the event.

“It’s an honor to be at this historic event, Oakland’s first trans march. It means a lot to us as we celebrate the 15th anniversary of Transgender Gender-variant and Intersex Justice Project (TGIJP). We celebrate Black trans leadership and excellence. Celebrate Black transwomen while they are still alive. Do more than celebrate,” said TGIJP representatives at the parade

A mini-rally for Black Trans Lives followed Pride in the Park Ball, taking place after the parade at the Pergola, a scenic Roman column arch on the shore of Lake Merritt. Event organizer Kin Folkz joined the panel of judges for the Pride in the Park Ball, an event that showcased Houses, such as seen in the television show Pose. Two visiting Houses from Los Angeles were on hand to show locals how it’s done.

The parade did great job of both keeping Black transwomen front and center, and raising the profile of transmen. Because movie and television portrayals omit transmen, there is still a general lack of awareness of transmen and transmasculine non-binary people. This can lead to a lack of funding for medical care for transmen, and sexism from both sides when transmasculine individuals are forced to utilize medical services that are designed for cisgender women. While transmen of make up a small fraction of the trans deaths annually, all Black trans people face discrimination.

According to the taskforce, the one area in which Black transpeople had an advantage was a higher level of family support than the general transgender community. Overall, it is very important for the Black community and Black families to make every effort to make our communities safe for Black transwomen and all Black trans people. 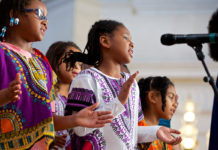 Let’s have a fruitful Kwanzaa!