President Evo Morales forced to resign in a U.S.-EU-NATO axis of domination-backed coup

The Black Alliance for Peace condemns the U.S. sponsored counter-revolutionary coup in Bolivia. The right-wing ruling elite of Bolivia with the full support of the bipartisan right-wing U.S. government is attempting to reimpose the anti-people authoritarianism that was the norm throughout “our Americas” during the period of unchecked U.S. hegemony.

The people of Bolivia entered a new historical era when the largely indigenous Movement for Socialism (MAS) with Evo Morales in the leadership disrupted this history of unchallenged U.S. hegemony.

However, with the forced resignation of Morales and the physical assaults against leaders of the MAS, the progress made by indigenous and working-class people of Bolivia is under serious assault.

BAP is not surprised by this desperate attempt on the part of the global reaction led by the U.S. to stem the tide of progressive development. This attempt only confirms why there can be no authentic peace without social justice, and for that the oppressed must fight.

But to fight it, the enemy must be named.

Political subversion, killer sanctions, drone death from the skies, mass incarceration, genocide, slavery, white supremacist ideology, ecocide, social degradation and dehumanization characterize the policies and character of the hegemonic Pan-European colonial-capitalist white supremacist patriarchy and the reasons why for the sake of our collective humanity it must be defeated.

The assault on Bolivia is no more than the project’s latest criminal offense. The silence, lack of visible opposition and outright support for the coup from across the Western world is yet another example of the cross-class white supremacist commitment to the imperialist project.

Like the silence that greeted the Trump administration’s announcement that it would, without any legal foundation or pretense to humanitarian issues, use the sons and daughters of the U.S. working class to steal the oil of the sovereign state of Syria, the truncated morality of U.S. exceptionalism is revealed once again for what it has always been – parasitic white supremacy.

The Black Alliance for Peace is further steeled by the latest turn of events in Bolivia. As African internationalists ensconced in the belly of the racist colonial beast, the energy from the bones of the indigenous peoples and enslaved Africans buried beneath the soil of this stolen land provides us with an antidote that resists the obscurantist fairy tales of the “American dream” and U.S. exceptionalism.

We know what the colonialists can never understand and that they may win a temporary victory today in Bolivia, but tomorrow belongs to the peoples of the world who are casting off any illusions about what it will take to liberate humanity from the grip of their global colonial-capitalist nightmare.

Across the planet, the people are in motion against the nightmare and BAP stands with them. We are clear: We say not one drop of working-class blood to defend the capitalist dictatorship in the U.S., and we demand that all people of conscience in the West join us to defeat the U.S.-EU-NATO axis of domination for the good of humanity.

People of Bolivia, you are not alone. Victory to the oppressed,

No Compromise, No Retreat,

Ajamu Baraka represents the Black Alliance for Peace: A People(s)-Centered Project Against War, Repression and Imperialism. He is a human rights activist, organizer and geo-political analyst, the 2016 Green Party nominee for vice president and founder of the Black Alliance for Peace. He is an associate fellow at the Institute for Policy Studies (IPS) in Washington, D.C., and editor and contributing columnist for the Black Agenda Report. He is a contributor to “Killing Trayvons: An Anthology of American Violence” (Counterpunch Books, 2014). He can be reached at ajamubaraka2@gmail.com. 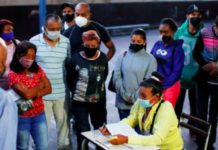 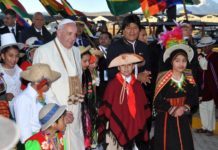 Pachamama and the Pope