The press conference and protest were a reaction to what Jones calls “shameful, elitist,” out-of-touch politics in San Francisco. For example, in September 2018, the San Francisco Board of Supervisors (BOS) Committee of the Whole heard over 200 Black workers’ accounts of racism, discrimination, hostile work environments and other disparate treatment of City and County Black workers.

Supervisor Shamann Walton took Malia Cohen’s seat as she stated that the BOS would reconvene and help solve this issue. However, Black workers have been asking Walton to reconvene the BOS since, and he has refused. But he does apparently have time to campaign to be elected to the Democratic County Central Committee (DCCC).

Prior to the 2020 MLK Jr. SF Labor Council breakfast, Ms. Jones, newly elected SF District Attorney Chesa Boudin and others spoke outside of the Marriott Marquis to the public and press about the numerous injustices that Black San Franciscans face. Ms. Jones and supporters afterward interrupted the Labor Council breakfast in progress, marching around the banquet hall of 500 attendees which included the San Francisco Board of Supervisors, while chanting “break the chains.”

After Mr. Grizzell expressed support but asked Ms. Jones to stop, Ms. Jones demanded: “If you are going to continue to have this breakfast, you must meet with the Black community, you must say what you’re going to do to bring us closer to equality, equity and justice. And the following year, you get up there like you are now, and you tell us what you did.”

In a victory for protesters, Mr. Grizzell responded from the stage, “We will make that commitment to you right here … When we leave out of here we will have a conversation to get more specific about the needs that you’re talking about. I make that personal commitment to you in front of 500 people and the streaming audience that’s at those cameras.”

In her speech later in the program, Mayor Breed praised Ms. Jones and her supporters and echoed the view that more work needs to be done more quickly to improve racial disparities for Black San Franciscans.

“My hope,” said Jones, “is that this will not be just another department with a catchy name which provides no equality, no equity and no justice for Black San Franciscans.”

In a media advisory, Ms. Jones elaborated that San Francisco leaders have “said that they’re working on these issues, but after three reports in 55 years studying Black People in regard to racism, Black San Franciscans are worse off than ever before.” Jones acknowledges that the Board of Supervisors recently created a new department to study racial inequality; however she notes that it fits into a long-standing pattern of the City gathering data, rather than taking action.

“We demand that City Supervisors work to keep Black folks in San Francisco and to improve their quality of life. We demand that they pass policies to immediately relieve the disparities. We demand that the City show us what they have or have not been doing. Just ‘collecting data’ isn’t good enough,” Jones said. 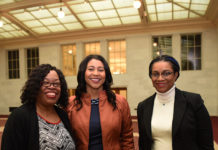