How Black authors and publishers are empowering our communities through Black events, anthologies and Black takeovers of white dominated genres.

“But I’m not sure how many of the black horror writers publishing now, or recently, would feel like they were incubated within the larger horror community; it might be more as a part of the Afrofuturism movement of black speculative fiction, which has been growing rapidly in recent years. More likely, it’s in tandem – with support from horror readers, but bolstered by a black readership eager to see itself reflected within many genres.”
– Tananarive Due, first Black Stoker nominee

Black speculative fiction authors are incubated by genre fiction fans and industry insiders who care about Black writing, and genre fiction fans in Black communities alike. Groups like the Afrosurreal Writers Workshop and events like AfroComicCon, The African American Multimedia Conference, The Sacramento Black Book Fair and others center on Blackness. You can find out about them and others like them through websites for Blerds (Black Nerds) like www.BlackSciFi.com and www.BlackScienceFictionSociety.com. African American and African Diaspora authors gather together at these conventions to network and promote together.

“I attended Black to the Future in Seattle in 2006, The State of Black Science Fiction in 2016 and Blacktasticon 2018. All three conventions focused on black speculative and were well attended. During those conventions, I felt affirmation as an author and valued as a member of the community. I have often told people that attending The State of Black Science Fiction’s inaugural event in 2016 felt like a homecoming. Many of the authors and artists I knew, but having one solitary place brimming with black magical people made me feel welcomed, as if I had returned home from a long journey abroad. It was inclusive, empowering and eye-opening,”
– Nicole Givens Kurtz, Mocha Memoirs Press

My name is Sumiko Saulson, and I am a local African American sci-fi and horror author, editor and event organizer living in Oakland, California. I won the 2016 HWA StokerCon Scholarship from Hell. My anthology “Black Magic Women” on Mocha Memoirs Press was on the Horror Writers’ Association’s Recommend Reads List for 2018 and was the #1 Horror Anthology on Amazon twice that year. I won the Afrosurrealist Writers Oakland Award in 2018. I won the BCCVoice’s essay award for Reframing the Other in 2017.

My latest book is a collection of essays on African American and African Diaspora literary and cinematic horror fiction by various Black authors called “Black Celebration: Amazing Articles on African American Horror.” I have a collection of short stories by disabled authors with disabled protagonists called “Wickedly Abled” coming out on Jan. 15, 2020, and I recently completed a succesful Kickstarter funding campaign for that.

“While never having attended a convention or symposium, I have attended Black book club conferences. The experiences have all been amazing and gave Black authors the chance to discuss things relevant to them and their journey to becoming published writers. Being in safe spaces to discuss books, readers, publishers, publishing and everything that comes along with the literary industry has broadened my horizons and given me a great appreciation for Black art and literature.”
– Nikki Michelle, noir erotica author

What is the difference between a convention, a conference, a symposium, and a fair? Conventions, symposiums, conferences and fairs have some intersection, but there are distinct differences. Book fairs are a type of trade show and are tabling or vendor-centered. They offer opportunities for authors to meet fellow authors, book stores, writers’ associations and clubs that can further their careers. Although they often include lectures and classes, information and sales tables are their core. The Bay Area Book Festival is the biggest local book fair, and takes place in Berkeley, California. The first Black Book Fair I attended was a literary area at the Bay Area Black Expo in the late 1990s with my mother and the non-profit book vendor invited us to join them at their table. The Bay Area Black Expo is now in its 26th year.

The Sacramento Black Book Fair is the first Black centered book fair I presented at, and I have been there twice. The SBBF continues to offer tremendous opportunity to up and coming authors of African descent and usually features in excess of 70 authors on panels every year. It takes place on or about the first weekend of June in Sacramento. Established authors like Pat Canterbury rub elbows with first time authors with a fresh debut. Their online application process makes application easy, and it’s free, although, due to a large number of cancellations, authors are now required to provide a $25 refundable deposit, returnable upon showing up to present.

“I’m extremely excited to be a part of what I’m calling a literary movement. The wonderful Black book club events I previously attended (where I met my idol L.A. Banks), I started out as a reader, and then eventually moved up to being an author who was attending as a reader.” – Kai Leakes, speculative fiction and romance writer

Conventions, such as WorldCon, ComicCon and three year old AfroComicCon, are fan-driven. Exciting fan-centered events like meet and greets, photo opportunities with celebrities, fan-sponsored workshop and panel ideas, and fan club organized costume contests and dance competitions and the like make conventions more family-friendly than trade shows such as the book fairs. Entertainment segments, themed dances, karaoke, musical entertainment and more make these fan centered events a lot of fun.

Symposiums are educationally centered and involve educators and are often held at college campuses. They give educators innovative ideas for future curricula. They are a form of conference and usually have a more somber tone than conventions and conferences.

“Nowadays at a conference such as the African American Multimedia Conference, I’m coming in primarily as an author, even though I’m also attending as a growing Black female speculative and romance writer. I’m thrilled to finally meet my fellow ‘sistas in lit’ that I’ve come to know on FB and connect with fellow experienced creatives as a reader and mentee. I plan to soak up as much of the wonderful energy we’re all bringing and honor the AAAMC brand while broadening my knowledge in the publishing world.” – Kai Leakes, author of “Sin Eaters”

Conferences such as the African American Multimedia Conference are something halfway between a symposium and a convention. They are still education-focused and have a lot of lectures and workshops. Musical performances are subdued and brief and tend to be a part of things like awards ceremonies and honoring or remembrance ceremonies. Films and movies and more quiet forms of entertainment are typical. There usually aren’t full-fledged costumes called cosplays (costume play for short) like at comic conventions, but a much simpler version called a hall costume. Awards ceremonies are common at conventions and conferences. A pair of Vulcan ears with your regular clothes is a good example of a hall costume.

Black events give authors, publishers, editors and fans from the African Diaspora an opportunity to interact with and uplift one another with intention. Black takeovers of white-dominated spaces can be tiring. Black-centered spaces give writers space from expending emotional energy on educating allies. Further, they offer safe spaces for Black authors to compare notes because non-black attendees are not the focus and are often sparsely present at these functions. Cities like Sacramento, Oakland, Los Angeles, Seattle, San Diego, Atlanta, Detroit and Brooklyn host most of the major Black literary events.

“When I returned to Blacktasticon in 2018, that feeling of homecoming returned. Attending a predominantly black science fiction convention, with programming that centers black speculative works, is an exhilarating, educational and affirming experience.” – Nicole Givens Kurtz , Mocha Memoirs Press

The African American Multimedia Conference is an event I established with my mother, Carolyn Saulson, who passed away on Jan. 14, 2019, in the city of San Francisco. With a large exodus from the city, the event has taken root in Oakland, and now takes place in both San Francisco and Oakland.

The AAMMC is currently taking applicants for San Francisco’s Feb,14 and Oakland’s Feb. 15 and 16 library events and will have Black Queer centered programs at the Oakland LGBT Center Feb. 16 and 17 featuring Nisi Shawl, Nikki-Michelle and Sumiko Saulson. Crystal Connor and her book “My 1st Nightmare” will center Youth Programs at the 81st Street Library in Oakland 2 p.m. to 5 p.m. on Sunday, Feb. 16, 2020.

Want to learn how to publish your book yourself? Sumiko Saulson, author of #WritingWhileBlack, will be teaching a workshop series on self-publishing sponsored by Friends of the Library at Oakland’s Eastmont Library Branch every Monday (except President’s Day) in February 2020 from 5 to 7 p.m. Free and open to the public.

Next month in January 2020: Irene McCalphin and the Pantheacon Walkout. 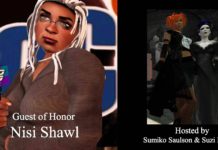