Oakland – After more than 20 years of experience as a thought leader in criminal justice and community empowerment, Ella Baker Center Executive Director and author Zach Norris will launch his new book “We Keep Us Safe“ on Tuesday, Feb. 4, in Oakland. In the book, Norris presents a vision for how the United States can achieve safety and security for everyone, especially the most vulnerable members of society.

The SF Chronicle calls “We Keep Us Safe” “a useful guide for how to heal a divided country that feels beyond repair, moving away from fear and focusing on connection and restoration.” Norris speaks to a new vision of community safety and presents strategies that argue for moving from a fear-based model of safety to a “culture of care.”

During the launch event, Norris and special guests – also featured in the book – will share stories from the book and discuss a framework to help understand and transform the policies and practices that perpetuate intergenerational trauma and community suffering.

“If we are able to transform our old system and create a culture of caring and healing in its place, we may have an actual shot at creating real democracy for the first time.”

Having grown up and attended schools in Oakland, Norris witnessed the economic, social and political inequities in low-income and communities of color and a lack of basic resources. After graduating from Harvard University and earning his law degree from New York University, Norris returned to Oakland, where he worked as an organizer with Books Not Bars, a movement to transform the juvenile justice system in California. Connecting his activism, law background and passion for social and criminal justice, Norris led a campaign that successfully shut down five youth prisons across the state.

In “We Keep Us Safe,” he argues that systems such as white supremacy, patriarchy, and capitalism all thrive in what he defines as the “framework of fear.” To help ground his “culture of care” model in practice, Norris takes readers through three stories from people in his community, showing how each fits within the framework of fear and then uses the care-based model of safety to offer recommendations to remedy – and prevent – the conditions for these injustices.

“If we are able to transform our old system and create a culture of caring and healing in its place, we may have an actual shot at creating real democracy for the first time,” Norris says.

Books will be available for sale by Mrs. Dalloway’s. All proceeds benefit the Ella Baker Center. 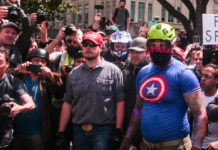