It’s been quite some time since I last chimed in, I know. Sitting in this cell, I sometimes forget that being a voice in this world requires speaking out about who (and where) you are from time to time, and reporting truly what you see and feel. Truth be told, I stumbled a bit and lost my footing after receiving an execution date at the end of 2018. It made me so mad: having an expiration date attached to my existence! Days, weeks, a whole year slipped into the future.

But why so mad? When I was first indicted 27 years ago, the state offered me a “deal” that, had I taken it, would have protected me against the death penalty. True, I would have had to plead guilty to something I didn’t do, but at least I would’ve been able to hold on to my life without the fear of being strapped down to a gurney one day; and wasn’t that the most important thing, to preserve my life? Well, I guess that depends on what one considers one’s life, doesn’t it?

Back in 1993, when all this started, I’d been reading Frantz Fanon and Malcolm X and, through them, was given to understand that life isn’t so much about the preservation of the body but the preservation of the mind, of one’s principles and beliefs. To them, it was futile to “survive” in a body without a functioning brain, and without the strength and fortitude to stand up for what you believe in. I came to feel the same.

“I didn’t fail; I got off my couch and tried to do something with my life. . . whales, 60-foot waves, the sun disappearing into the ocean: things you can’t see from the comfort of your couch.”

Early on, when I was first thrown into solitary confinement, I took up reading adventure magazines to pull my mind away from the monotony of staring at four walls all day. Reading provided a window through which I could see life.

One day I stumbled upon a story about a man who attempted, single-handedly, to circumnavigate the globe on a sailboat. Had he succeeded, he would have been one of few men to achieve such a feat. About halfway through his journey, however, the boat capsized after running into a terrible storm, which forced him to abort the mission.

A few weeks later a reporter showed up at the man’s house to conduct an interview; he wanted to know how it felt to have failed? “First of all, I reject that characterization,” the man said. “I didn’t fail; I got off my couch and tried to do something with my life.” He went on to describe some of the things he saw on his journey: whales, 60-foot waves, the sun disappearing into the ocean: “things you can’t see from the comfort of your couch.”

Reading this story had a big impact on my 24-year-old self. I loved the man’s attitude and his refusal to allow a stranger to walk into his life and impose a separate interpretation on something he himself had experienced firsthand. “We only fail when we don’t try,” I remember him saying. He spoke about the importance of utilizing our own agency and experiencing for ourselves the reality of life. Something within me responded very much to that idea.

When I pled innocent and demanded a trial, I did so for the very simple reason that I hadn’t killed anyone, as the state alleged. And, thank god, I was still young and naive enough to believe that my innocence was the only thing that mattered. No, I had never experienced a trial, had never witnessed with my own eyes the machinery of justice; and, it turns out, not very many people have.

In fact, of the over 2.6 million people behind bars, 95 percent of them took a “deal”; this, regardless of whether they were actually guilty or not. But I didn’t know this then. The only thing I knew is that I was NOT going to plead guilty to something I didn’t do.

So, like my friend on the sailboat, I decided that I would “circumnavigate” the criminal justice system. Like everyone else, I’d heard the words JUSTICE and INNOCENT UNTIL PROVEN GUILTY before, but I wanted to meet them face to face. I was done living in the comfort of my ignorance and accepting, without challenge, the reality of life. And if the cost of knowing the truth was death, well, I was ready to pay it; and pay it, I did.

But that doesn’t mean I failed. If anything, I’m the proud recipient of a top-notch education. The things I’ve seen (to say nothing of the things I’ve learned from the hundreds of books I’ve read), you wouldn’t believe. I mean, equal to a whale or a 60-foot wave is an all-white jury, 12 faces fixed with hate before they’ve even heard one shred of evidence.

Oh, it’s awe inspiring! To see a racist judge robed in black, stacking and then dealing from the bottom of the deck. Trust me when I tell you, it doesn’t get any better than that. This is the show that not many people get to see, because the price of admission is so steep. But to see it is to be transformed, to be forever changed.

I tried explaining this to a college professor once, and he concluded that I had been helped by these people in some way; that the harsh treatment I was forced to endure was ultimately a “good thing.” I reject that characterization. In fact, I was placed in a situation wherein it was fully expected that I would not survive.

Years later, after being on death row for over a decade, I had a chance encounter with one of the prosecutors who put me here, and he couldn’t believe I was still standing; he looked at me as if he saw a ghost. Indeed, they threw me into the middle of the ocean and left me for dead, believing that I would surely drown. It was God who taught me how to swim, not them.

Listen: When it comes to life and death, there’s no such thing as a “deal”; you’re either living or you’re not. And that’s the question I think we should all ask ourselves this coming year: Are we living now? Are we doing the things that will make our lives better and brighter?

Obviously, there’s a lot of darkness to overcome in this world, a lot of evil forces to contend with, and the only way to successfully confront these things is together. I really believe that.

I continue to hear about all the “friends” I have on Facebook, people who have peeped my page (“Justice for Keith Lamar”) and “liked” the content. That’s cool. But let me tell you: If you are here because you feel sorry for me, you have misunderstood. If you are here because you recognize that your struggle is bound up with mine, then perhaps we can work together (to paraphrase aboriginal artist Lilla Watson).

To that end, I look forward,

with love and solidarity, and

blessings in this new year,

Send our brother some love and light: Keith (Bomani) LaMar, 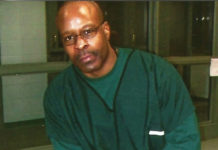