“American prisons are death traps. They are the places with the highest rate of coronavirus infection in the world. Incarceration in the time of COVID skirts the genocidal cruelty of death by disease of the Nazis,” said Johanna Fernandez, a longtime Mumia supporter and an associate professor in the Department of History at Baruch College, CUNY. “If the state cannot protect the lives of prisoners. It must let them go. That’s the general panorama.”

More and more people are coming to the belief that the federal and state governments are allowing for the COVID-19 virus to ethnically cleanse prison systems nationally. Look at the numbers of Black prisoners who are being infected and dying in an environment where social distancing is impossible.

Black political prisoners at the top of the government’s list for biological execution are not limited to but include Ruchell Magee, Romaine “Chip” Fitzgerald, Imam Jamil Al-Amin, Dr. Mutulu Shakur and Mumia Abu Jamal. I interviewed their supporters to see what a few of our many beloved political prisoners are up against.

“To risk them dying from (the COVID-19) virus is cruel and unusual, given that they are old men who are not a threat to anyone. They should be freed to live out the rest of their lives with whatever family they have still living. This is something being done around this country right now for people with connections,” said Arthur League, a former Black Panther political prisoner himself, as well as the head of the Romaine “Chip” Fitzgerald and Ruchell Magee Freedom Campaign.

With Ruchell Magee in his 80s and Romaine “Chip” Fitzgerald not far behind him in age, they have already been in prison for a total of over 100 years. Both are Black community war veterans from the Civil Rights-Human Rights-Black Power movements of the ‘60s and ‘70s. Instead of being government mercenaries, they put in work on behalf of the people against the state – a state where the disparities in every sector of life in the inner-city Black communities are becoming more and more apparent as the quarantine inches along.

Ruchell Magee was the sole survivor of the Aug. 7, 1971, Marin County Courthouse Massacre and Romaine “Chip” Fitgerald is a former Los Angeles Black Panther accused of the attempted murder of a police officer and the murder of a security guard in ‘69. Both have been denied parole dozens of times.

Alongside Chip and Ruchell, there are a number of other Black political prisoners who are too rarely discussed, which is ironic because the impact of their sacrifices has been monumental in the history of the United States and the world. People like Ed Poindexter, Veronza Bowers, Sundiata Acoli, Russell Maroon Shoatz, Jalil Muntaquim, Aaron Patterson and our Indigenous comrade Leonard Peltier are a few of today’s most feared victims of the FBI’s counterintelligence (COINTELPRO) program.

Their organizing skills, courageous hearts and revolutionary political ideologies are what the government has been encasing in these concentration camps aka prisons unjustifiably. In all of the cases of political prisoners, like many general prisoners, the media was used as a biased weapon to prejudice potential jurors, their families and the public towards conviction no matter what the evidence pointed to during their trials.

“Mumia is concerned for himself and others across the country. He is concerned that the state will use COVID-19 to deepen repression and control in the prisons,” said Johanna Fernandez, author of the new book “The Young Lords”, and host of “It’s a Good Day” morning show on New York’s WBAI radio station.

Mumia Abu Jamal was taken captive because of his radical journalism and his organizing skills, which he had put to use in Philly at least since the days of his work as the Minister of Information of the Philly chapter of the Black Panther Party. He has been wrongfully accused of killing a police officer and has been held captive since 1981.

“In SCI Mahanoy, where Mumia is imprisoned, the men have been on lockdown for over two months. The men are allowed outside their cells on their blocks – seven to 14 men at a time – for 45 minutes a day. During this time, they are expected to bathe, use the phone and clean their cells. Mumia reports that prisoners were given four masks each at the time of the lockdown and that prisoners have been cleaning the units at the end of every 45-minute interval.”

“Ironically, Iran, the country that the United States impugns for rights violations, has freed over 70,000 prisoners in this COVID-19 moment.”

Mumia has also been diagnosed over the years with diabetes and hepatitis, among other ailments that constitute pre-conditions that can make Mumia an easy target for the COVID-19 virus.

“I have talked with Chip many times, about once a week. The people inside (the prison) are concerned that the guards might bring the virus inside, as the prisoners can’t have visits, and they can’t get away from each other once it gets inside. Look at prisons around the country; you will see that it has gotten inside. It’s just a matter of time,” said Arthur League.

Prior to Dr. Mutulu Shakur being captured, Dr. Shakur ran the Lincoln Detox center in New York to help cure crack addiction and other ailments using revolutionary ideologies mixed with Eastern medicine in the late ‘70s and early ‘80s. This is one of the main activities that made him a prime target for the FBI to neutralize.

“Through the forms of acupuncture, in which Dr. Shakur is licensed, he would be able to help people through their trauma due to the coronavirus pandemic. Dr. Shakur also possesses skills in the form of mentoring and counseling,” said Talib Shakur, one of the sons of Dr. Mutulu Shakur, and an active leader in his father’s freedom campaign.

“The reason why I pointed out the above facts is because not only should Dr. Mutulu Shakur be released because his life is in jeopardy because of his underlying health issues in addition to the coronavirus, our father would be a supporting factor in helping to heal people through his many forms of healing techniques.”

Talib Shakur went on to explain, “Dr. Mutulu Shakur qualifies for compassionate release due to his health issues, and the fact that he should have been released years ago. He is battling bone marrow cancer, diabetes, as well as a few other health issues. The family and friends (now) have to worry if Dr. Shakur is going to be infected with the coronavirus. The virus has (already) been brought into the facility through outside sources.”

“We are told to distance ourselves from each other by 6 feet. How do these old men distance themselves by 6 feet in a 6-foot-by-9-foot cell? Should they sleep standing up all night?” realistically asked Arthur League.

Although we cannot see into the future, history is our best teacher for predicting what is to come.

“The United States is ruthless. Its government has organized the country’s economy around incarceration,” said Johanna Fernandez. According to a 2014 report by the Center on Budget and Policy Priorities, “Corrections spending is now the third-largest category of spending in most states, behind education and health care.”

Imam Jamil Al-Amin, formerly known as H. Rap Brown, is in his 20th year of captivity on the trumped-up charge of killing a police officer in Georgia, even though a man by the name of Otis Jackson admitted to the shooting in another trial on videotape. Imam Jamil Al-Amin is the only surviving man who is named personally in the unclassified COINTELPRO files as someone the government was working to neutralize from becoming the political Black Messiah, which is something that the United States government has long feared.

“Because he is Imam Jamil-H. Rap Brown, the only option for release for him is us making the kind of noise necessary for change – and directing it to people capable of affecting the change we seek,” says Kairi Al-Amin, the son of Imam Jamil Al-Amin and a lawyer on his father’s defense team. “I launched a new campaign for retrial for my father today.

“Here is a link to the legal discussion video that answers all of this and more. Also, here is the link to the new website complete with videos addressing everything and even a video of Otis Jackson/James Santos confessing to the crime on the stand in a different trial: www.FreeImamJamil.com.”

“People should write the governor, all their elected officials and the press and demand that any older prisoners who have reached their minimum eligible parole date be released at once.”

“Ironically, Iran, the country that the United States impugns for rights violations, has freed over 70,000 prisoners in this COVID-19 moment. The United States, for its part, is continuing to imprison people – just one sign of the ruthlessness and absolute moral decay and disintegration of America’s failed state,” said Johanna Fernandez.

All of our Black political prisoners deserve to be freed now, and we, as a community, need to get more involved with this effort. While on quarantine, educate yourself and your family about who these warriors are, and do everything you can to help them.

Arthur League concluded, “People should write the governor, all their elected officials and the press and demand that any older prisoners who have reached their minimum eligible parole date be released at once.”

If you would like to write to some of the political prisoners discussed in this story, here are a few addresses to send love and commissary to:

The People’s Minister of Information JR Valrey, journalist, author and filmmaker, can be reached at blockreportradio@gmail.com or on Facebook. Visit www.youtube.com/blockreporttv. All stories written about COVID-19 were partially made possible by the Akonadi Fund #SoLoveCanWin. 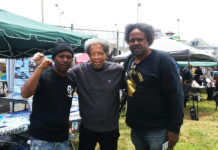 Albert Woodfox speaks on being a political prisoner 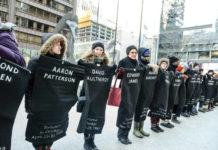