by Rand Gould and Kenneth Smith

While you’ve been busy reopening the state for business, via your Michigan Safe Start plan, the COVID-19 pandemic is exploding like a biological time-bomb in Michigan’s aging and overcrowded prisons, with a 50 percent infection rate among state prisoners confirmed by recent news broadcasts. Your current plan to expedite the parole of state prisoners who are past their earliest release dates will, at best, only release a thousand prisoners, more or less.

This is a far cry from half of the state’s 38,000+ prisoners who need to be released in order to effectively practice the bare minimums of social distancing required to protect prisoners, staff and the community from the unnecessary and criminal exposure to COVID-19. Given the 30 prisons currently operating in Michigan, a good portion of which are old polebarns built as “temporary facilities,” Michigan’s prisons are currently being operated at double their designed capacity.

Fortunately, there are two viable options you, as governor, can exercise to alleviate the severely overcrowded conditions in Michigan’s prisons and therefore to put in place the minimum social distancing protocols to contain the current COVID-19 explosion:

You can use your emergency powers to make across-the-board 90-day time cuts to prisoners’ sentences. Govs. Milliken and Blanchard did exactly this in the ‘80s to alleviate overcrowding, at least before they began the massive prison building program, continued by Gov. Engler, which saddled state taxpayers with our current bloated and costly – $2 billion per year for the past two decades – prison system and set the table for the COVID-19 explosion you’re facing now.

Additionally, you can work with the state legislature to repeal the disciplinary time law – so-called “Truth-In-Sentencing” – and retroactively restore prisoners’ disciplinary credits, thereby reducing sentences by five days per month for good behavior. This option has the added benefit of eventually saving the state hundreds of millions of dollars, because, even after the COVID-19 pandemic is over, many more prisons could be closed for good. Or …

You could reopen the state’s many closed prisons and transfer prisoners into them. This would also alleviate the overcrowding due to operating the state’s prisons at double their designed capacity and it would enable prison administrators to institute genuine minimum social distancing protocols, as opposed to sham protocols currently in place. However, bringing these old prisons on-line and up-to-code, as well as hiring the new employees to operate them, would cost the state’s taxpayers several hundred millions of dollars.

Consequently, we both suggest you implement option #1, immediately! Lives are at stake, including ours! We’re both past our earliest release dates (Gould’s was in May 2019; Smith’s would be in October 2018, with the restoration of earned disciplinary credits), so your expediated parole process didn’t help us, as we’re still here at Central Michigan Correctional Facility, crammed like sardines into eight-man cubes, with less than 8 square feet of unencumbered floor space per person, in 8 old cattlebarns housing 320 men each, for a total of 2,560 Level 1 prisoners, all of whom could be, and should be, released to parole, and none of whom should have to risk death in prison from COVID-19 as part of their sentence.

Thank you for your prompt attention to this life and death matter.

Send our brothers some love and light: Rand W. Gould, C-187131, and Kenneth Smith, A-212103, Central Michigan Correctional Facility, 320 N. Hubbard St., St. Louis, MI 48880-1926. Copies of this letter were sent to Dana Nessell and Michigan Legislators. Readers are encouraged to write their own letters to the governor about their own complaints and suggestions: Gov. Gretchen Whitmer, George W. Romney Bldg, P.O. Box 30013, Lansing, MI 48909. 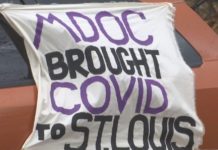