Soledad guards in riot gear at 3 a.m. July 20 snatched 200+ Black prisoners from their bunks, brutalized them, crammed them into the kitchen for hours, zip-tied, unmasked

In the pre-dawn hours of Monday, July 20, white and Hispanic guards at the Correctional Training Facility at Soledad State Prison in California violently ripped hundreds of Black prisoners from their bunks, regardless of good behavior and lack of gang affiliation. The men were slammed around by wannabe commandos in full riot gear, then zip-tied and led in the dark to the chow hall. The men were barefoot, wearing only what they’d fallen asleep in. They weren’t even allowed to grab their masks.

Reports from the prison indicate upwards of 200 men were assaulted then forced to sit shoulder to shoulder with other unmasked inmates in the kitchen as a tower sniper was called just in case one or some of the cuffed men needed to be executed on the spot. The men were made to sit there for hours without even being told what was happening.

My husband was one of those inmates. He was violently tossed off his top bunk – woke up as he was in the air – and slammed his head into the cinderblock wall. His head still hurts nearly 24 hours later. His hands were bound so tightly that they turned blue. I know what you’re thinking: “But what did HE do?” That’s the thing. He, just like countless other Black men in his building, had done nothing to deserve the treatment they received Monday at 3 a.m.

Gavin Newsom . . . allows California prisons to be run like internment camps with rations unsuitable for a child and abusive untrained, unskilled officers.

My husband eventually saw a piece of paperwork with his picture on it and something about his father being affiliated with the Black Panthers nearly 40 years ago. My husband is affiliated with no organization and was given permission by CDCR to correspond with his father, who is incarcerated at another facility. That hasn’t stopped them from raiding his cell multiple times over the years and targeting him as gang affiliated.

Little did the men know, but as they were sitting in wait, their cells were being ransacked. Guards took every book, piece of mail, note and phone book that they could find. My husband had hundreds of dollars worth of books alone. Will they ever receive these things back? Did the former high school jock failures who stole their belongings bother to separate and label each inmate’s things? Doubtful. That would take actual work, which is something no one with a badge wants to do. The men returned to their empty cells in pain, cold and dirty.

After hearing from her husband Monday, one woman wrote on Facebook:

“Good morning ladies … just needing a vent moment. My man just called and told me that at 3am they ran up in their building, took all the Blacks out of their cells, cuffed and searched em. Took all my man’s personal and legal paperwork and his storage bins. There was no incident that caused this. He’s personally had no write ups and has been discipline free … why???? And I know shit like this happens in there and this life ain’t for the weak, blah, blah, blah but sometimes you have those moments where you just need to break down for a quick second … the bounce back is what counts and his strength is mine but for this quick moment, I needed to shed some tears. I’m good now. Thank you.”

I received a call from my husband Monday morning letting me know what had happened and to get a hold of anyone who would listen about what’s happening in Soledad. Not only was what the guards did a violation of California state law by forcing inmates in such small quarters with so many other men, but it is a violation of the inmates’ constitutional right to life by refusing them their masks. Many men were still unable to call their loved ones Monday night, as their phone books were confiscated “pending an investigation.”

Now it’s time for us. You and me. To stand up to Warden Craig Koenig (craig.koenig@cdcr.ca.gov) and demand answers for this inhumane treatment of non-hostile prisoners.

Importantly, why were no Black guards present and why were only Black inmates assaulted?

We want Gavin Newsom to issue a statement as well as to why he allows California prisons to be run like internment camps with rations unsuitable for a child and abusive untrained, unskilled officers. Please reach out to these people and demand the targeting of Black inmates ends today.

Writer Tasha Williams will be interviewed on Prison Focus Radio on Thursday, July 23, 11 a.m., on KPOO, 89.5FM or kpoo.com.

Tasha Williams, an activist dedicated to bringing her husband home, can be reached at tashachildress@gmail.com. 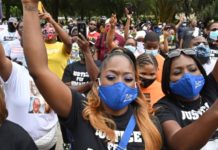