Aswad “Baldhead” Muhommed started the Struggle to Bubble Movement, a homeless empowerment community survival program, in 2013 in Oakland to feed his soul – not for a non-profit grant, not for a tax write-off, not because he is running for office or trying to sell an album, and not for a status symbol. I have personally seen and participated in the work of Struggle to Bubble, and it was transformative for me as I know it has been for many.

At the end of July, Struggle to Bubble did a quick clothes drop to an Oakland homeless encampment on 23rd and MLK aka “Old San Pablo,” which is significant because many non-profits who did work with the homeless cannot jeopardize the health of their employees during the COVID pandemic, leaving the homeless stripped of much needed, usually reliable support in a capitalist country where they are invisible because they are not money-makers.

This is the type of grassroots work that should be championed in our community, because Aswad aka Baldhead and Struggle to Bubble took the initiative in Oakland to work on the homeless crisis, while the local, state and federal government has neglected to in any significant way. We must remember just because COVID came does not mean that the homeless crisis disappeared.

And remember a good majority of the Bay Area’s homeless population is Black. So our community cannot afford to look the other way.

JR Valrey: When and why did you start Struggle to Bubble?

Baldhead: I started Struggle to Bubble in August of 2013 because I was laying in the bed, and I sat up. I said to myself out loud, “I’m about to give the homeless people some clothes.” I went into my closet, grabbed some old clothes and put them in a bag. Knocked on my brother’s room door and asked if he wanted to give something to the homeless. And he told me to grab whatever I saw, which I did, and put it in a bag.

Then I went on social media and made a post to everyone: “Whoever wants to donate clothes to clothe the homeless, I’m accepting all donations.” And after I made that post, I had a living room full of clothes and bags. My first donation from social media came from James Jefferson aka Bone; it was seven bags of women and men’s clothes.

JR Valrey: How and where did you get the name?

Baldhead: Struggle to Bubble came from a homeless person named Bo. So I went to the homeless encampment on 23rd and MLK, passing out clothes. I lifted up the door on the U-Haul truck while he was standing in front of it. He saw all of the clothes and hygiene products inside and he said, “Man, Baldhead, this is the struggle to bubble for real.”

And I said what did you just say, and he repeated it again, and he said this is the struggle to bubble. And he said, I’m with this movement right here. And he went on to say, you have done more for this homeless encampment than the City of Oakland. That’s where the name Struggle to Bubble came from.

JR Valrey: Can you talk about Struggle to Bubble’s work with the people’s barber Lorenzo Haley aka Zoe?

Baldhead: My nephew is a certified barber that I had in the homeless encampment cutting hair. He cut about 25 homeless people’s hair. His work wasn’t going unnoticed. Usually when the police pull up on a Black man it’s harassment, but this time the officer recognized the work my nephew was doing and gave him $300 and said, “I appreciate the work that you are doing in the community.” And drove off.

After the homeless people got a free haircut, they looked at themselves in the mirror and it built up their confidence and made them smile, and I have video of that also.

At this moment, my nephew, the people’s barber, is fighting for his life in Sacramento County jail.

JR Valrey: Who is involved with you in Struggle to Bubble?

“Every human being deserves a hot meal and a place to rest that is safe and comfortable.”

JR Valrey: Can you talk a little bit about some of the different drives of the Struggle to Bubble Movement?

Baldhead: The first drive I did was the clothing drive. The second one I did was the food drive, where I brought my BBQ pit to the homeless encampments because every human being deserves a hot meal. Then I did the female hygiene drive.

I did a sock drive because I asked homeless people what are some of the things that they really need, and it was socks and water. I did a haircut drive, which gave free haircuts for men and women. Then I did a tent drive, because that was a big need during the winter time, because the tents were being ripped up and destroyed from the weather.

JR Valrey: What’s next for Struggle to Bubble?

JR Valrey: How do people get in touch with Struggle to Bubble?

Aswad Muhommed aka Baldhead’s Cashapp is $ASWAD. Any donation will be appreciated.

Struggle to Bubble and Black New World Media are organizing a Black August Giveaway on Aug. 22 in Oakland. If you are interested in donating, contact Aswad Muhommed or JR Valrey at BlockReportRadio@gmail.com.

JR Valrey, journalist, author, filmmaker and founder of the Black New World Journalists Society, can be reached at blockreportradio@gmail.com or on Facebook. Visit www.youtube.com/blockreporttv. All stories related to COVID-19 were partially made possible by the Akonadi Fund #SoLoveCanWin.

As public education disintegrates into distance learning for the foreseeable future, Oakland parents are coming with solutions

Uber and other gig employers threaten to shut down operations soon, pushing Yes on Prop 22 with millions 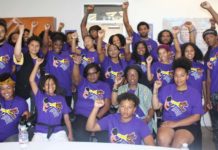