The story of the 2020 sports-strike-wave-against-racism is already one of both inspiration and cooptation. It’s also a story that is being written in pencil not pen. In other words, it’s a story that still does not have an ending and we should be wary of anyone who thinks they have an ironclad analysis of where all of this is headed. But to even have a sense of where it might go, we need to understand why it detonated in the first place.

It starts by understanding the impact of the police murder of George Floyd – which has led to the most important social uprising in decades and the largest series of marches in the history of the United States – a social uprising that’s been met with terrible violence thanks to this president, his cohorts in the police and the violent white militia movement.

The NBA and WNBA players argued back in June about whether to play in this COVID-free bubble or if they should just sit out the season so as not to distract from the demonstrations in the streets. They did, of course, decide to go back and, as part of the deal, the owners and Commissioner Adam Silver incorporated Black Lives Matter into their messaging with BLM written on the court, players kneeling during the anthem, and slogans written on the uniforms.

Call it woke capitalism. Call it woke marketing – if you like. It was corporate symbolism in the model of so many companies that put out statements against racism following Floyd’s killing.

But after the police shooting of Jacob Blake, that contradiction became too intense. Players in the NBA and WNBA – which has led on all of these political questions – felt like chumps. They were in a figurative and literal bubble away from their families and friends, living in dorms, saying to one another: “Here we are playing with BLM on our uniforms and nothing changes.”

That led to the Milwaukee Bucks not playing on Wednesday in their playoff game against the Orlando Magic. Other NBA teams followed suit. Then the WNBA teams announced that they would be sitting out, which was stirring but not surprising.

Then it went to Major League Baseball, which really was stunning given its conservative history and paucity of Black American players. Then Major League Soccer and, gobsmackingly, the National Hockey League. Naomi Osaka, the tennis star of Japanese-Haitian descent, also bowed out of her tournament and tweeted the following, which summed up so many of the feelings across the sports world:

“[B]efore I am an athlete, I am a black woman/And as a Black woman I feel as though there are much more important matters at hand that need immediate attention, rather than watching me play tennis. I don’t expect anything drastic to happen with me not playing, but if I can get a conversation started in a majority white sport I consider that a step in the right direction.”

“Watching the continued genocide of Black people at the hand of the police is honestly making me sick to my stomach. I’m exhausted of having a new hashtag pop up every few days and I’m extremely tired of having this same conversation over and over again. When will it ever be enough?”

The sports media largely called these “boycotts.” But they are not boycotts. They are strikes. These athletes are not consumers; they are workers. And they were withholding their labor in protest of police murder and white supremacy.

Some people on the left have cynically rolled their eyes at this. After all, as they say, these are very wealthy people. They’re not real workers …. What could they really accomplish? (This dismissiveness, unfortunately, mirrors the racist drivel from Jared Kushner and his implications that the players’ efforts are somehow inauthentic because of their wealth and fame.)

This analysis, which, in addition to ignoring the way that racism affects all Black and Brown people and not just the poor, misses three objectives that the players have already achieved:

That is all incredibly important. Especially the second point. As I wrote before, I received half a dozen calls from labor folk asking how to contact the players. It raises a challenge to labor officialdom to no longer be on the sidelines in the fight for Black lives.

The players now have incredible leverage to use their spotlight, to extract concessions from management, or to go back out on strike again, especially if police and militias aren’t brought to heel. And of course, they aren’t.

But the radical potential of this moment also means that, within hours of these strikes, the forces of cooptation were also working overtime. Sports owners, who tend to be to the right of Ghengis Khan, were scrambling to show their support for the players. Entire teams started putting out statements and talking about action plans that came out of conversations between management and labor.

Instead of players striking, it was teams announcing that they would not be playing: “labor and management against racism!” The Baltimore Ravens are a great example of this, putting out on the team letterhead a statement decrying racism, calling for the arrest of Breonna Taylor’s killers, all with the aim – at least for now – of appeasing some fed up football players whose season is supposed to start in less than two weeks.

The players in all the leagues, in an absence of a lead from the broader labor movement, have been left operating in a vacuum, trying to wrest concessions from ownership to join the struggle for Black lives. As one could imagine when dealing with billionaires, this had led to tamping down of demands, with much of the energy being channeled toward the November election and electoralism, most notably an agreement to open up stadiums as voting centers.

There has also been a great deal of publicity about the appearance of President Barack Obama, who spoke with LeBron James and Chris Paul, encouraging them to go back to work, use their platform through playing basketball, and start a social justice committee. This is Obama trying to neutralize a struggle and funnel it into a safer direction, less likely to offend the white majority, and less likely to spread.

But the intervention of Obama has also led to an analysis that this is a story that has ended with cooptation, of selling out. That is wrong. Again, this is a story written in pencil, not pen. We still don’t know where this is going. We need to understand this situation is on a knife’s edge.

The players now have incredible leverage to use their spotlight, to extract concessions from management, or to go back out on strike again, especially if police and militias aren’t brought to heel. And of course, they aren’t.

We don’t know where this is heading. Instead of decrying this for what it isn’t, we need instead to be holding up their example to the rest of the labor movement to act with similar urgency to this political moment, not expecting athletes to do it for us.

What we can also do, though, is acknowledge that any action which lays down a gauntlet and challenges the labor movement to act should be seen as a step forward. Striking for Black lives is now on the table, not as an abstraction but as a goal worth fighting for.

Dave Zirin is the author of 10 books, including “The John Carlos Story“ (Haymarket), and sports editor for The Nation magazine, where this column first appeared. Named one of UTNE Reader’s “50 Visionaries Who Are Changing Our World,” Zirin is a frequent guest on ESPN, MSNBC and Democracy Now! He also hosts The Nation’s Edge of Sports podcast. Visit and contact him through his website EdgeofSports.com. Follow him on Twitter @EdgeofSports. 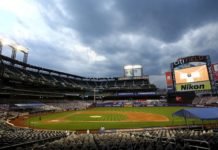