Public bus service is essential to the Black community.

AC Transit, the public bus system covering a service area of 1.5 million people across Alameda and Contra Costa Counties, has a ridership that is one third Black. Amalgamated Transit Union (ATU) 192, representing bus drivers and mechanics, is 80 percent Black. More than other people, Black folks rely on AC Transit as a way to get around and as a source of stable, well-paying union jobs.

People who ride the bus don’t need me to tell them that the public bus service is a basic necessity. Members of our community use the bus to get to work, to school, to shop for groceries, to visit friends and family. Lower-income people are especially likely to rely on the bus – 65 percent of weekday riders come from low-income households.

As unemployment skyrockets and more working people are forced into precarious, low-paying “gig” work, good union jobs like those provided by AC Transit are more essential than ever. Thanks to a history of heroic labor struggle by transit workers, these jobs provide secure employment, benefits and decent pay to Black working-class folks.

Sadly, our transit workers and our public bus service is in danger. AC Transit is not doing enough to ensure worker safety during the pandemic: As of early September, 37 AC Transit employees had contracted COVID-19 and two had died.

I support Prop. 15, which would tax corporations to raise as much as $25 million for AC Transit.

The AC Transit Board is also using the pandemic as an excuse to make cuts, saying they may get rid of up to 30 percent of existing service. These cuts would be a disaster for our transit workers and our Black community members who rely on public transit to get around, especially the elderly and people with disabilities.

The transit board’s neglect of our workers’ safety and the cutting of bus service are part of a bigger pattern – a pattern of disinvestment from public services in working-class communities, most of all Black and Brown communities. The past several decades have seen cuts to public education, to social services and to good public-sector jobs. On the other hand, elected leaders give away billions of dollars to corporations in tax cuts and funnel more money into racist policing and mass incarceration.

I’m running for AC Transit Board in Ward 1 because the workers of ATU 192 asked me to run. They know we need leaders who are willing to fight for our essential workers and our essential public services.

We need to say no to bus service cuts and layoffs, and demand that AC Transit protect Black lives by keeping its buses safe for workers and riders. I’m calling for AC Transit to offer free masks and hand sanitizer to all riders, to expand service and to protect and create more good union jobs.

We can fully fund our public transportation and other essential services by building a movement to tax corporations and the ultrarich. That’s why I support Prop. 15, which would tax corporations to raise as much as $25 million for AC Transit.

I support initiatives to tax rideshare companies like Uber and Lyft, who are trying to privatize public transit and are paying millions of dollars on Prop. 22 for the right to keep cheating their workers. We need to look at reallocating funds from bloated police department budgets to public transit and other public goods.

I know that transit justice is racial justice. I hope you’ll support my campaign for AC Transit Board and help me win the public transit system we deserve.

Jovanka Beckles, a former member of the Richmond City Council and former vice mayor, is a candidate for AC Transit Board in the November election. She works as a mental health specialist for Contra Costa County and serves on the Richmond Progressive Alliance steering committee. She was born in Panama City, where she grew up in a bilingual, multicultural household. Her family moved to the United States in1972, and she has lived in Richmond for nearly two decades. Visit her campaign website, at https://www.jovankaforactransit.com/ and contact her at info@jovankaforactransit.com. 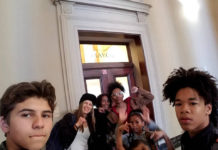 AC Transit riders fight for their right to ride, 55 years after Montgomery